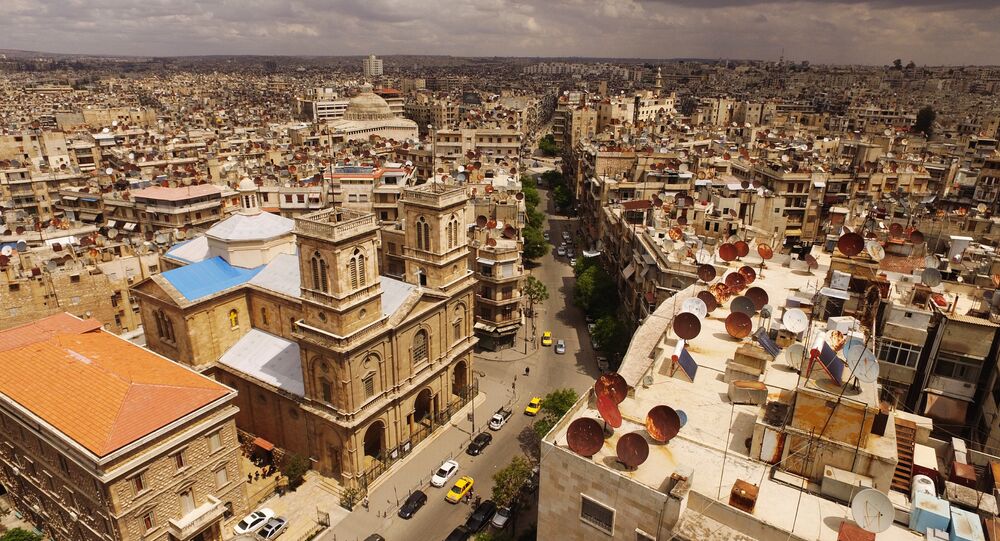 Life in Aleppo is thriving and markets are flourishing despite continued attacks on liberated areas by the terrorist groups.

Citizens were seen going about their everyday life, restaurants prepared various Arabic dishes for their guests; bazaars sold fruits, spices and many every day household items to thousands of buyers.

Al-Jamila market is the largest in Aleppo. There are over 10 thousand sellers and thrice the number of buyers. The vendors sell bread, kebabs, fruit, vegetables and spices.

© Sputnik / Mikhael Alaeddin
A market in the city of Aleppo, Syria

Apples in the al-Jamila market cost $0.16 and shawarma was $0.37. The average public sector wage in Aleppo is around $53.16 or 20 to 30 thousand Syrian liras. However, market vendors make a much higher wage by selling food items.

One shopkeeper named Maqsood named the one item that all shops must have. “We must have olives for sure. We either pickle them or squeeze the oil out of them,” he said.

A shopper named Zahra admitted that after the war her salary has decreased, “But then I still bought eggplant to make a traditional Aleppo dish. We stuff the eggplant with minced meat and boil it in yogurt,” Zahra said, sharing her recipe.

© Sputnik / Mikhail Voskresenskiy
A market in the city of Aleppo, Syria.

In the supermarkets everything is like in the nice European shopping centers, but the prices are also higher than in street shops. “We get products from all Syrian cities. It is mainly import but half is local produce,” manager Bakri Tahan said.

In the area nearby, songs by a musical ensemble were heard. Sigam Attala and his friends had come to a cafe to entertain guests at a wedding.

A huge table with various delicacies was laid out. Somehow, seeing all the thriving life in the city it was difficult to imagine that just a few blocks away there was a humanitarian corridor, behind which people were being held captive by the terrorists.

The Syrian army and the people’s militia began the operation to liberate the rebel’s stronghold on Saturday morning after retaking the district of al-Assad and the settlement of Minian, according to the Lebanon-based Al Mayadeen satellite television channel.

The Syrian Armed Forces began a large-scale military operation in Aleppo after the September truce brokered by Russia and the United States lasted less than a week.

A violent conflict between the forces loyal to President Bashar Assad and opposition factions as well as terrorist groups has been raging in Syria for more than five years.

'Local Peace': This is the Way to Save Aleppo