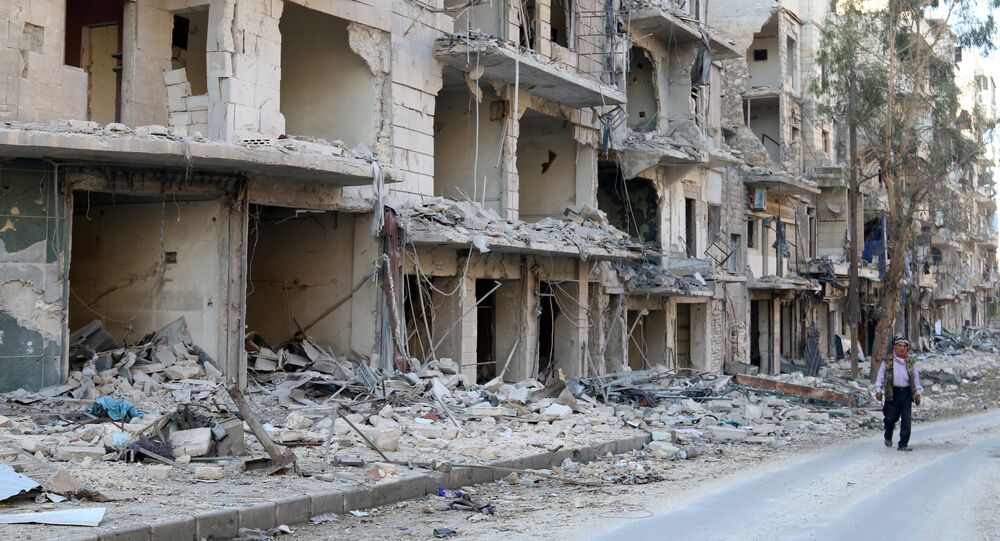 Chemical weapons that Syrian rebels have used against civilians and service personnel in Aleppo could have been produced by the militants or delivered from abroad, but they are unlikely to have come from Damascus-led forces since the Syrian government has destroyed all of its chemical stockpiles, experts asserted.

© AFP 2021 / KARAM AL-MASRI
Russia to Give OPCW Soil, Shell Samples Confirming Terrorists Used Chemical Weapons in Aleppo
"These weapons are incapable of inflicting major damage. This is why they have no value in terms of military strategy. Chemical weapons are primarily aimed at mass destruction of enemy fighters. The Syrian Arab Army had stored weapons rigged with sulfur mustard, sarin, tabun and other chemical compounds," RT reported.

Unlike these complex substances, chlorine is the simplest kind of a toxic agent. This is why chlorine attacks are a "trademark" of the militants.

Retired Vice-Admiral Tengiz Borisov told the media outlet that the militants could have recovered chlorine from water treatment plants. He also suggested that armed rebel groups could have gained access to chemical weapons stockpiles of the Syrian Arab Army, including sulfur mustard and sarin, which had been produced prior to Damascus joining the UN Chemical Weapons Convention.

"Russia can hand over all the necessary evidence to the Organization for the Prohibition of Chemical Weapons (OPCW). However, it is highly unlikely that experts will be able to determine which group has used chemical weapons [in Aleppo]. There are hundreds of armed militias in Syria. They exchange weapons and at the same time fight against each other. It is nearly impossible to determine who produced weapons uncovered by the Russian Radiological, Chemical and Biological Defense (RChBD) troops and who they were transferred to, as well as other details," he said.

Earlier this week, Russian Defense Ministry spokesman Maj. Gen. Igor Konashenkov said that RChBD experts had found unexploded ammunition with chemical agents and took soil samples in the area where attacks had taken place. They conducted an express analysis, with a detailed probe expected to take place at an RChBD laboratory, which is accredited by the OPCW.

Borisov further said that chemical weapons found in Aleppo could have been imported. Military expert Igor Nikulin echoed these sentiments particularly with regard to white phosphorus, saying that "intelligence services of our so-called partners are most likely well aware" of these deliveries.