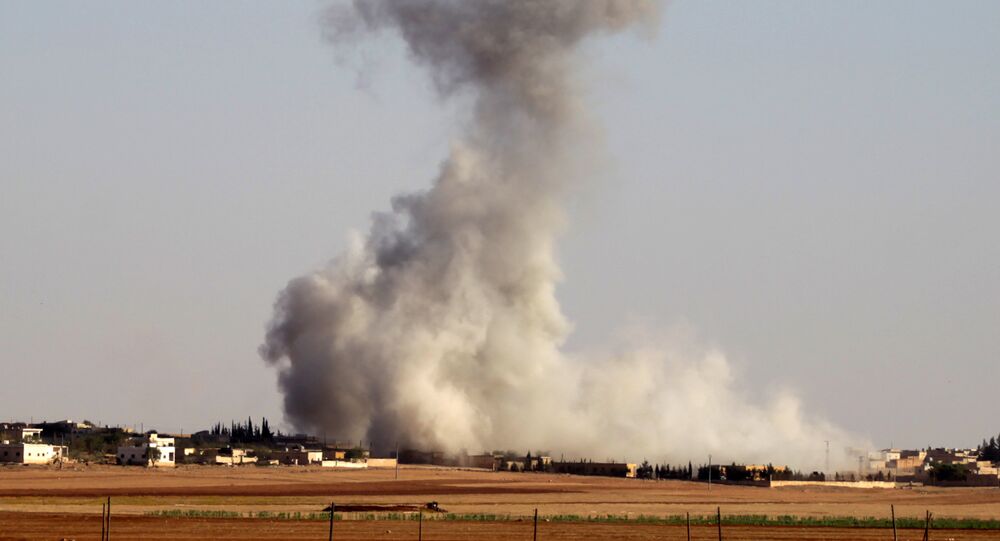 Saudi Arabia and other Gulf states, particularly Qatar, bear responsibility for what is happening in Syria, Russian orientalist Sergei Medvedko told Svobodnaya Pressa, adding that these countries have sponsored foreign militants fighting in the war-torn country.

"I am convinced that Syria would not be in this nightmare if not for activities of Saudi Arabia and several other monarchies," he said. "Mercenaries who have flooded Syria and have been fighting under the banners of radical groups have primarily received financial assistance from Saudi Arabia and Qatar."

Earlier this week, WikiLeaks founder Julian Assange told RT that an email sent by Hillary Clinton to her campaign manager John Podesta in early 2014 confirmed that Saudi and Qatari governments provided "clandestine financial and logistic support" to Daesh in particular and other radical Sunni groups.

© AFP 2020 / Omar haj kadour
Syria's Future Even Worse Than One Can Imagine if 'Moderate' Rebels Topple Assad
Medvedko's remarks came after Russian Ambassador to Saudi Arabia Oleg Ozerov told RIA Novosti that despite differences Moscow and Riyadh share common ground when it comes to resolving the Syrian crisis. The Russian diplomat was referring primarily to UN Security Council Resolution 2254 which called for a ceasefire and a political peace process. He also mentioned that both countries have discussed Syria at bilateral and multilateral meetings.

Experts have questioned Ozerov's optimistic assessment, saying that there are major points of contention between the two countries with regard to Syria.

"Areas of common interest between Russia and Saudi Arabia are not obvious," Medvedko said. "In this context, federalization, which amounts to the breakup of the country … will have no positive implications. It could only spark new conflicts."

Grigory Lukyanov of the Moscow-based Higher School of Economics maintained that both Russia and Saudi Arabia are against dividing Syria into several independent or autonomous parts, but noted that Riyadh could change its stance if armed opposition groups retain their power.

© AFP 2020 / FADI AL-HALABI
Aleppo 'Bloodbath': US-Backed Moderate Rebels Join Extremists in Major Offensive
The analyst explained that if the Syrian Arab Army fails to destroy all radical groups in the country, Damascus will have negotiate with the rebels, who will demand self-governance over territories under their control.

"In this case, Riyadh could well support opposition's call for federalization," he said. For their part, "Moscow, Ankara and Tehran view federalization projects as unacceptable."

Syria's Fragmentation Into Terrorist Enclaves Should Not Be Allowed – Russian PM