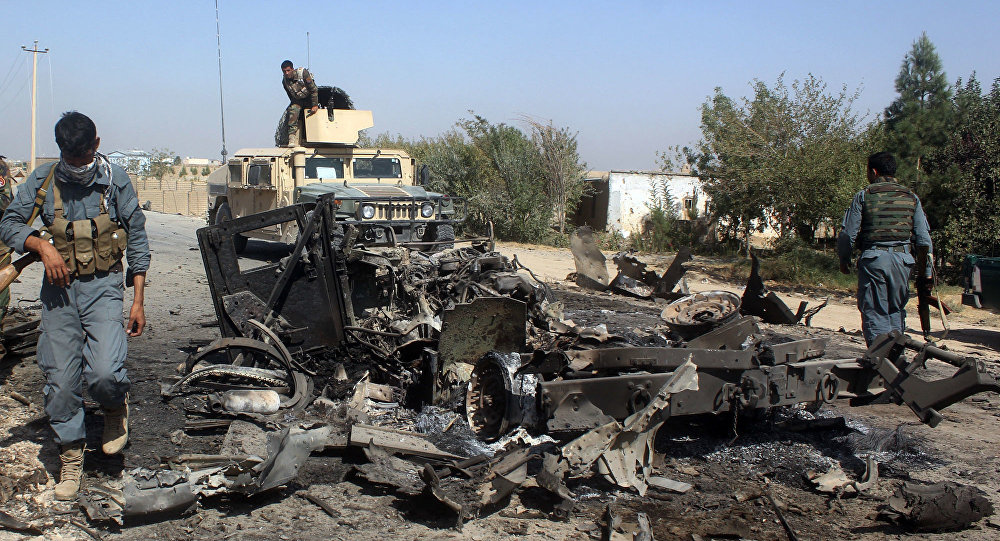 In the wake of a NATO airstrike in the Kunduz area of Afghanistan on Thursday, in which 30 civilians and two American soldiers were killed, a mood of anger prevails among residents.

Hundreds of mourners gathered on Friday to bury victims of the airstrike, among which were many small children. Local officials claim the deaths were caused by NATO airstrikes.

© AFP 2019 / JAWED TANVEER
Around 30 Dead, Dozens Injured in Latest Clashes Between Afghan Troops, Taliban
Taliban fighters last month seized the village of Buz Kandahari, three miles from the center of Kunduz. Airstrikes followed a military operation carried out by American troops with Afghan partners, to clear a Taliban militant position in the village. During the operation, the troops were surrounded by Talibans and air support was called, which hit the village, killing many civilians.

"As part of an Afghan operation, friendly forces received direct fire and airstrikes were conducted to defend themselves," said Brigadier General Charles Cleveland, of the NATO-led Resolute Support mission, according to Reuters.

The deadly airstrike was followed by angry protests from civilians. Taza Gul, a 55-year-old laborer, told the BBC, "I am heartbroken. I have lost seven members of my family. I want to know, why these innocent children were killed? Were they Taliban? No, they were innocent children."

© AFP 2019 / Martijn Beekman
ICC to Face 'Obstacles in Getting US Soldiers to Dock' for Crimes in Afghanistan
"My brother and three of his children were killed. My brother had no connection to any group, he was a laborer," said Mawlawi Haji Allahdad, a resident of the village, Reuters reported.

"Did you see which of those infants and children who were killed by the Americans were terrorists?"
"We will avenge our dead against the Americans and the government," he said.

Though air strikes have led to a 72-percent increase in civilian casualties in the period between January-September, with some 5,500 dead according to the UN, Afghan military officials see the US air power as critical support in their fight against the Taliban.

NATO Mission Dismisses Taliban Claims of US Casualties in Afghanistan