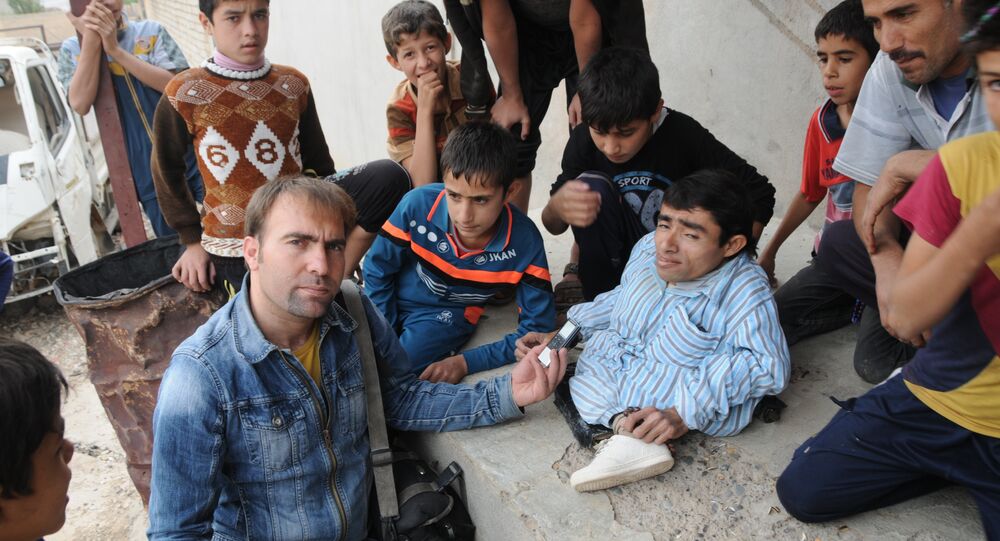 The residents of the Iraqi village of Faziliye located 20 kilometers north of Mosul and which was recently liberated from Daesh militants, told Sputnik what they had to endure over the last 28 months at the hands of the jihadists.

Fadıl Cuma a 37-year-old man who has been disabled from birth, shared his story with Sputnik Turkey, saying that he was subjected to flogging because he was once caught smoking on the street.

“The jihadists forbade us to use telephone or internet. We could not turn on the television or radio or listen to the music. Once I tried to explain to them that I needed to go to hospital for treatment to Erbil or Dohuk, but they did not even listen. No one could travel outside the village without permission and getting permission was practically impossible,” Cuma said.

Yunus Evdi a 12-year-old boy recalls severe punishment that he faced at the hands of Daesh. He received 20 lashes for talking to his aunt’s daughter on the street.

“Militants sentenced me to 20 lashes and a fine of 20 thousand dinars. They gathered the civilians in central square and punished hit me with lashes in front of everyone,” Evdi said.

The boy further added that nobody stood up for him because they were all afraid for themselves and their children.

Another citizen of village Faziliye, Talal Abdullah was smoking in his house when Daesh militants saw him through a window. They barged into his house and took him to Daesh court.

“Over there Daesh judge sentenced me to 50 lashes and a fine of 30 thousand dinars. After that day, I did not touch any more cigarettes out of fear of being subjected to painful punishment. But, praise be to Allah, the jihadists have been driven out of our village and now I can smoke safely without fear of anyone. You see, I have a pack of cigarettes in my pocket right now!” Abdullah said.

A young man named Hemed Yusuf was tortured by Daesh so badly that he was left crippled.

“They suspected me; they thought that I was helping my relative who was fighting in the ranks of Peshmerga forces. The jihadists stormed into our house, took me and my father into their headquarters. For 10 days they tortured and abused me, beat me on the legs and on the back with a metal pipe and a hose,” Yusuf said.

“This was about a month ago. As a result, I have become disabled. I cannot step on my left foot, I am tormented by great pain,” he added.

Hazım İsa another 40-year-old resident of the village said that Daesh kept the village under control for over 2 years and 4 months.

“During these years we lived like slaves. The situation for women was particularly deplorable. We were literally bound by hands and feet,” Isa said.

She further said that for any of the slightest deviations from the rules, Daesh immediately punished them severely. Isa recalls that there was a constant patrol by women working for Daesh and they made sure that all civilians were living by Daesh’s proposed laws.

“The daughter of my aunt was kept in prison for two weeks when they saw that she was wearing a ring on her finger,” Isa said.

On October 17, Iraqi Prime Minister Haider Abadi announced the start of a military operation to retake Mosul from Daesh with the help of airstrikes by the US-led international coalition. According to media reports, about 30,000 Iraqi soldiers and 4,000 Kurdish Peshmerga fighters initially took part in the operation.