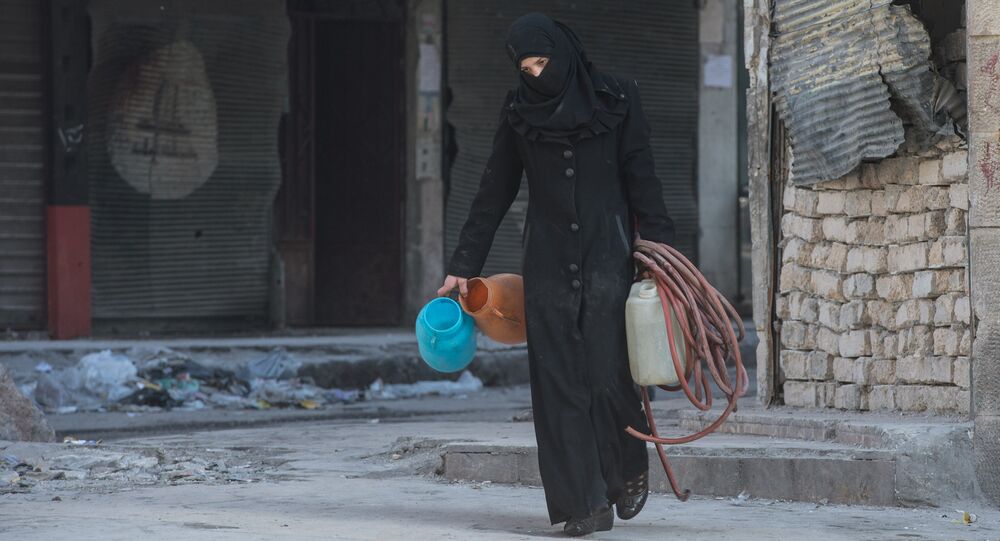 One of the freed Yazidi captives, a girl named Zainab, who was held by Daesh militants as a sex slave, shared with Sputnik Arabic details of her stay and why she was sold to a Saudi leader for a much higher price than other Yazidi slaves.

© Sputnik /
EXCLUSIVE: Yazidi Female Fighters Tell Daesh They'll 'Wipe Them Out' (VIDEO)
Zainab, along with other Yazidi women, was kidnapped by Daesh militants in 2014, after her village in the west of Nineveh province in Iraq was captured by terrorists.

She spoke with Sputnik Arabic, recalling her last few years as a sex slave and the horrors she was subjected to.  She was physically tortured and sexually abused at the hands of a militant who called himself Abu Jaafar.

“At first the militants kept us in Tal Afar, afterward in Mosul and then in the Syrian city of Raqqa. Then we were once again returned to Iraq. I was sold to a militant named Abu Jaafar, whose wife often beat me out of jealousy, thinking that I supposedly wanted to take her husband,” Zainab said.

She further added that the wife did not even want to understand the fact that Zainab was enslaved victim of her husband who did whatever he pleased with her.

Zainab said that Daesh women behave even worse than the men. They abuse slave girls and children born to them.

According to her, she knew of three cases of Yazidi children being poisoned to death by Daesh women.

“One time, 2-year-old girl in the village of Kojo was hung from the window of her house,” Zainab recalled.

After living with Abu Jaafar for some time, Zainab was sold to some other militants but none of them sexually assaulted her after Abu Jaafar, because she developed severe psychological trauma which led to her having serious problems with her reproductive system.

The incident shocked the militants and they stopped using her for their sexual pleasures.

“I knew one Yazidi girl in Raqqa who could not stand all these numerous tortures, so she shot herself with a pistol. There was also a 20-year-old Yazidi girl who committed suicide after a militant showed her a video in which she was lying unconscious, after being fed sleeping pills, while some militants took turns raping her,” she said.

She found out that al-Kharbi bought her for $13,000. Zainab asked him why she cost so much, when the other Yazidi women were bought and sold for merely 100 dollars.

“I was told it was because I could speak Arabic, I could recite the Quran and hence, I would be good with house chores,” Zainab said.

Earlier, Yazidi civil activist Khoder Khallat told Sputnik with reference to his sources in the Iraqi Armed Forces, that the army freed several women from sexual slavery after entering the city of Mosul.

“Three women and child of Yazidi origin were released from Daesh captivity in Gogjali area in the east of Mosul,” Khallat said.

All of the women had been in captivity since the capture of Mosul and its suburban areas in August 2014.