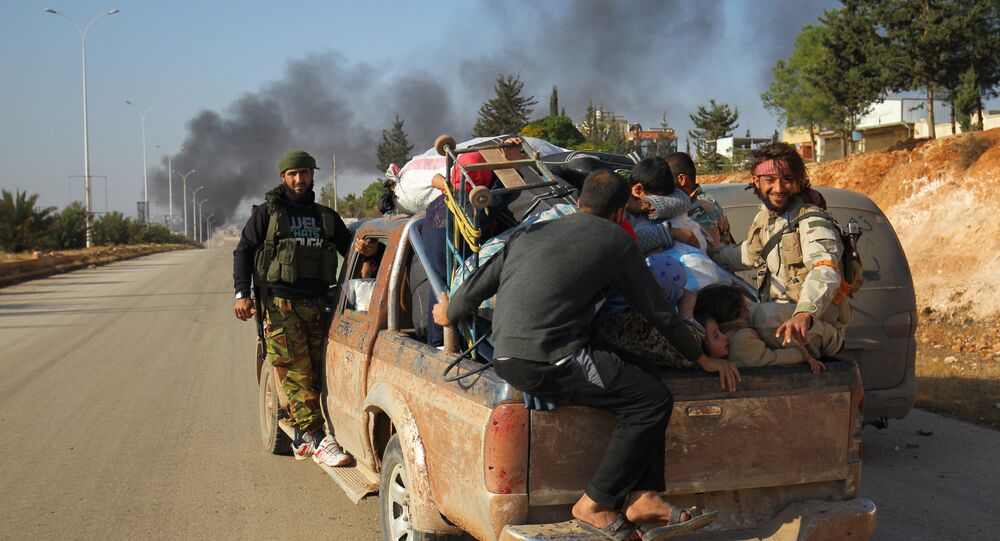 Terrorists in Aleppo are distributing leaflets with demands that its citizens pay 300 dollars each in order to leave the city through humanitarian corridors, according to RIA Novosti.

© AFP 2020 / BULENT KILIC
A Tale of Two Terrorist-Held Cities: How the Fight for Aleppo and Mosul Differ
The Supreme Military Council of Jaish al-Fatah, a jihadist-led coalition that includes al-Qaeda's official branch in Syria, initiated the distribution of leaflets in Aleppo which demand that its citizens pay 150,000 Syrian pounds (liras), or 300 dollars, each to leave the city through humanitarian corridors, RIA Novosti reported.

It quoted Jaish al-Fatah as saying that "our leadership is aware of the hardships suffered by civilians in Aleppo due to the bombing and the siege carried out by the Syrian Army."

"After meeting our brothers, we will allow all those aged under 14 and over 55 to leave Aleppo if they each pay 150,000 Syrian pounds to support our brothers at the front," the leaflets read.

On October 20, the Russian "humanitarian pause" was introduced in Aleppo to ensure the safe evacuation of civilians from the eastern part of the city via eight designated corridors.

During the humanitarian pause, the al-Nusra Front terrorist group, currently known as Jabhat Fatah al Sham, prevented civilians from fleeing the city, attacking them instead.

Meanwhile, Chief of Russian General Staff Gen. Valery Gerasimov said that the Russia Defense Ministry will introduce a 10-hour humanitarian pause in Aleppo on Friday "to avoid the senseless [killing of civilian] victims."

© REUTERS / Abdalrhman Ismail
Russian General Staff Appeals Directly to Militant Leaders to Leave Aleppo
He also said that the terrorists suffered heavy losses in Aleppo after their attempts to break through failed, and that they have no chance to escape from the city.

Over the last several months, Aleppo has become a battlefield between government forces, jihadists, and numerous opposition groups.

Militant-held eastern Aleppo is encircled by government forces and the fighting has affected thousands of civilians still trapped in the city.