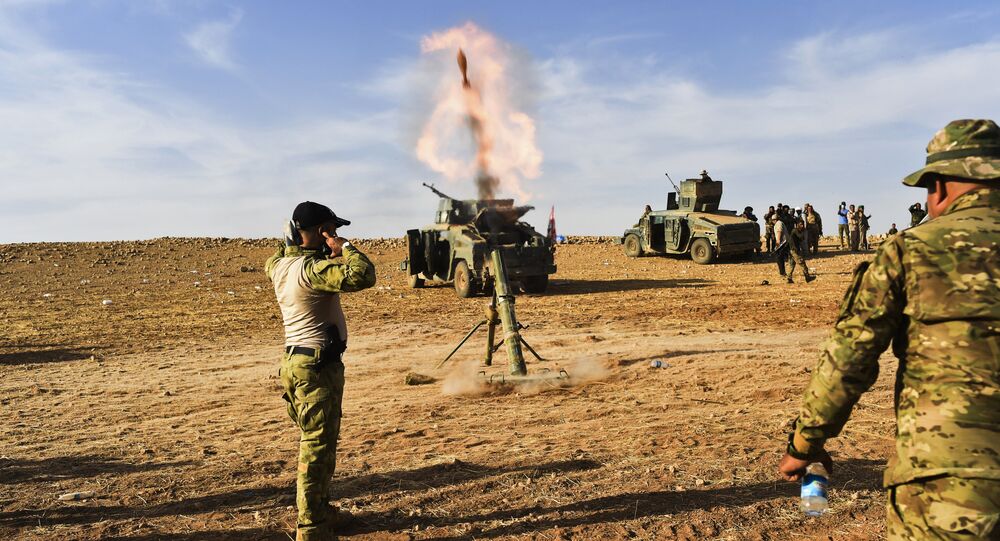 Attempts to belittle the importance of the Syrian Army's operation in Aleppo and simultaneously elevate the US-led coalition's operation in Mosul look ridiculous, according to RIA Novosti political analyst Alexander Khrolenko.

© Sputnik / Mikhail Alaeddin
Aleppo Violence Would End in 10 Days if West 'Stopped Financing the Militants'
In his commentary "How does the liberation of Aleppo differ from the seizure of Mosul," RIA Novosti political analyst Alexander Khrolenko specifically targeted attempts to belittle the significance of the Syrian Army's operation in Aleppo while at the same time glorifying the US coalition's operation in Iraq's Mosul.

Khrolenko recalled that over the last several months, Aleppo has become a battlefield between government forces, jihadists, and numerous opposition groups. Militant-held eastern Aleppo is encircled by government forces and the fighting has affected thousands of civilians still trapped in the city.

In a separate development on October 17, Iraqi Prime Minister Haider Abadi announced the start of a military operation to recapture Mosul from the internationally-outlawed terrorist organization Daesh, with the help of US-led international coalition airstrikes.

© AFP 2020 / BULENT KILIC
Members of the Iraqi Counter Terrorism Service (CTS) drive near the village of Bazwaya, on the eastern edges of Mosul, tightening the noose on Mosul as the offensive to retake Daesh stronghold entered its third week on October 31, 2016

Khrolenko also recalled that earlier, Russian Foreign Minister Sergei Lavrov said that he sees no difference between the situations in Syria's Aleppo and Iraq's Mosul. According to Lavrov, in both cities there is a need to fight the terrorists, which inevitably complicates the day-to-day survival of civilians.

The US State Department, Khrolenko said, was quick to condemn such a stance, citing "besieged noble rebels and fighters [clashing] with the Assad regime" in Aleppo and the coalition's efforts to destroy Daesh terrorists in Mosul, the largest city held by the Islamic State in terms of its pre-conflict population.

Khrolenko drew attention to the fact that the Russian warplanes continue to stay out of a 10-km (six-mile) zone around Aleppo amid efforts by the Russian Center for Syrian reconciliation to deliver humanitarian aid to Aleppo's citizens every day.

The coalition airstrikes on Mosul, meanwhile, show no sign of abating, with Iraqi TV channels reporting clashes between locals and Daesh terrorists who have repeatedly used civilians as "human shields."

"Dozens of civilians have already died in the coalition airstrikes but nobody is willing to turn to the UN Security Council to voice a protest," Khrolenko said, referring to the US envoy to the UN Samantha Power, who accused Russia and Syria of organizing a "massive and barbarian offensive on Aleppo."

© Sputnik / Iliya Pitalev
Liberation of Aleppo 'Will Be a Major Political Victory' of Syrian Government
In this vein, he said that in contrast with the West's fears about Russia's alleged preparations for a full-fledged military operation in Aleppo ahead of the November 8 presidential elections in the US, the Atlantic Council, an American think tank for international relations, showed a less biased position on the matter.

According to the Atlantic Council, "Russia is fighting in Syria for at least some of the following reasons: protecting an ally…, protecting its access to a naval resupply depot in the Mediterranean; seeking to be taken seriously as a global player; fighting Islamists; and interrupting a perceived Western-led regime change campaign in Europe and the Middle East."

"Deliberately or not, Atlantic Council underlines the fundamental differences between operations in Aleppo and Mosul: Russia is legitimately defending Middle Eastern stability, while the US-led coalition upholds a lawless right to 'regime change'," Khrolenko concluded.

In the meantime, Russian Defense Ministry spokesman Maj. Gen. Igor Konashenkov said on Tuesday that the coalition has carried out 25 sorties, conducting 21 strikes on Mosul over past 24 hours.