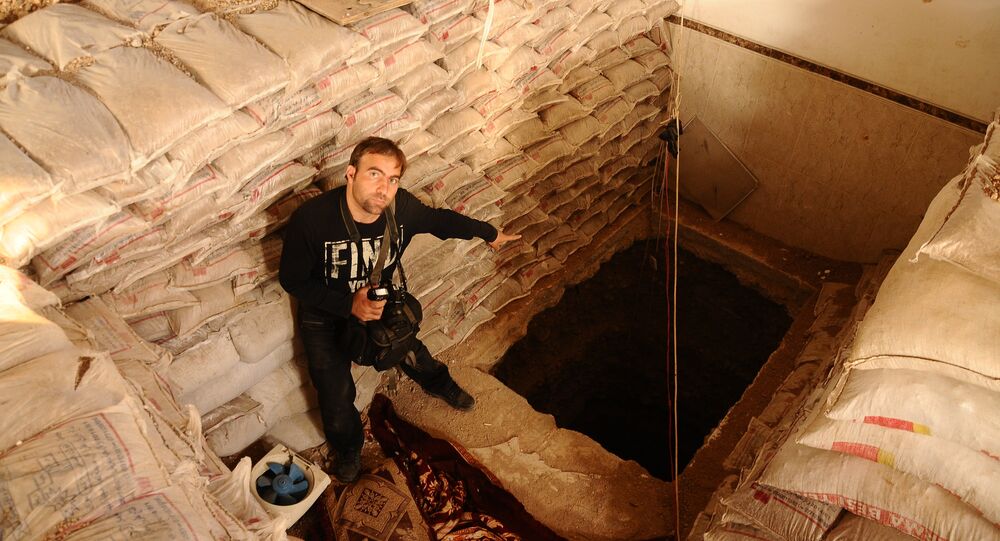 Iraqi government troops along with Peshmerga forces have already liberated at least 81 villages from Daesh terrorists as part of the liberation of Mosul; the jihadists continue to dig numerous tunnels in an attempt to flee the area.

© REUTERS / Stringer
Full Throttle: Iraqi Forces Liberate Mosul's Quarter, TV Station From Daesh
At least 81 villages have already been liberated by Iraqi government troops and Peshmerga forces during the ongoing battle for Mosul; meanwhile, Daesh (ISIL/ISIS) terrorists have been digging tunnels and underpasses in an effort to flee the area, which is currently under army control, according to a Sputnik Turkey correspondent.

A whole array of such tunnels have been discovered in the village of Hemdaniye, which is located ten kilometers from the city of Mosul in northern Iraq, and which was liberated by Peshmerga forces nine days ago.

One such tunnel featured electric lighting and was 300 meters long and a meter wide; it was found inside a village mosque, where the terrorists' household essentials were discovered.

In an interview with Sputnik Turkey, Peshmerga spokesman Merdem Fevzi said that Peshmerga had managed to enter the village of Hemdaniye after heavy clashes with Daesh terrorists.

According to him, even though the jihadists offered strong resistance, Peshmerga forces finally drove them out of the village, killing all 30 of them.

"Currently, active work is under way to de-mine the area where were found a spate of tunnels, each hundreds of meters long, which were dug by the jihadists so that they could hide from the coalition's air strikes and, if necessary, flee," Fevzi said.

He added that the terrorists apparently lived inside these tunnels, waiting out the air strikes, and that most of the tunnels were dug shortly before the beginning of the Mosul operation.

Meanwhile, Iraqi Interior Ministry spokesman, Col. Saad Moen said that Iraqi security forces had killed over 1,100 Daesh terrorists and recaptured hundreds of miles of land as the advance against the Daesh stronghold from the south continued on Tuesday.

© Sputnik / Hikmet Durgun
'Unsavory Mix': Liberating of Mosul Will Not Bring Iraq's Troubles to an End
The offensive helped liberate 895 miles of land in the surrounding Nineveh province, the ministerial spokesman added.

On October 17, Iraqi Prime Minister Haider Abadi announced the start of a military operation to recapture Mosul from the internationally outlawed fanatic terrorist organization Daesh, with the help of US-led international coalition airstrikes.