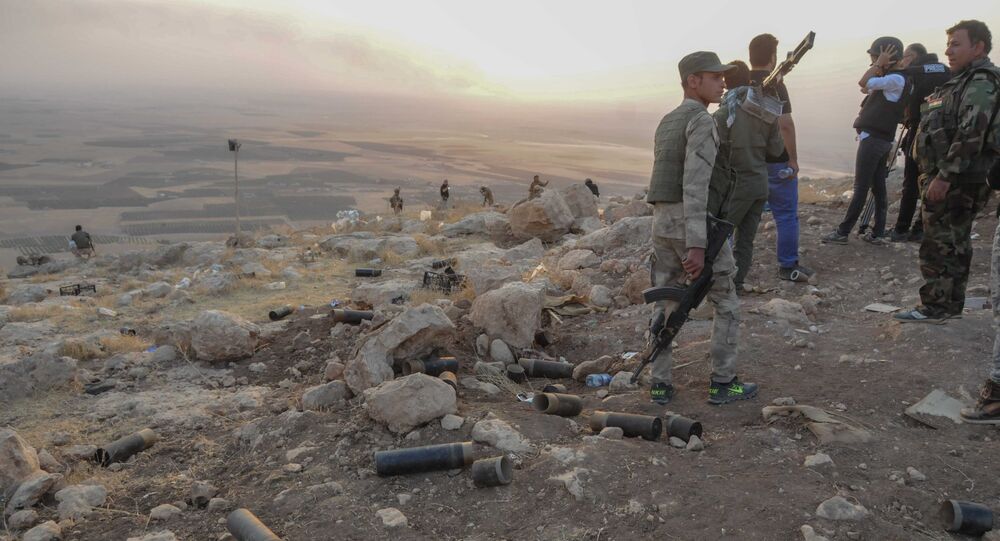 On Monday, anti-Daesh coalition forces resumed their offensive to liberate Mosul from the Daesh (ISIL/ISIS) terrorists. Speaking to Sputnik, Kurdish Peshmerga and Iraqi troops explained that local residents are very actively involved in the operation to liberate the city from the jihadists.

In the two weeks since the start of the operation to liberate Mosul, which serves as Daesh's de facto capital in Iraq, coalition forces have freed 79 villages and three major towns near the city's outskirts. On Monday, an Iraqi military spokesman said that the army had advanced to less than a kilometer from Mosul's city limits. Over 30,000 Iraqi army troops and 4,000 Iraqi Kurdish Peshmerga militia, along with Shia militia forces and about 5,000 US troops, are participating in the assault.

© REUTERS / Stringer
Iraqi Forces Liberate Mosul Suburb Bazwaya, Several Nearby Villages
As Sputnik has found out, Mosul residents themselves are actively engaged in the operation to free their city from the terrorists.

Ferhat Ferec is one of them. Speaking to Sputnik Turkey, the 34-year-old Mosul resident-turned Peshmerga fighter explained that he managed to flee his hometown half a year ago, only to join the Kurdish militia to help liberate it.

"I am originally from Mosul, was born and grew up there," Ferhat said. "When Daesh militants seized the city two-and-a-half years ago, I decided to flee the city, but was not able to do so at first."

"However, I did not give up hope in escaping Mosul, because life under the yoke of the jihadists was simply unbearable. We lived every day as if it was our last – you could never feel safe. The militants were constantly saying that we must join the jihad."

"I lived with my family…in east Mosul. I suggested that they escape, but they decided against it, because they did not want to take such a serious risk. As for myself, I made the decision, and six months ago was able to escape along with a group of other locals. Before my escape, I sent a message to Peshmerga regarding our plans to leave the city. They told us to take white flags with us in order to avoid getting shot at. We did so, and we were able to escape."

© Sputnik / Hikmet Durgun
Lowest Form of Warfare: Peshmerga Forced to Create Special Unit to Deal with Daesh Mines in Mosul
Describing his daring escape, the militia fighter explained that "the distance from the place we ran from and Peshmerga forces was 15 km. We feared that Daesh militants would catch us; but fortunately, we managed to get to the Peshmerga front lines, where they took us under their defense."

"We are fighting to free our city and our people from these thugs," Ferhat stressed. "The front on which I am fighting is 10 km from Mosul. Allah willing, in two weeks' time we will enter the city, and in a few months will be able to [completely] liberate it."

The militia member warned that the operation to liberate the city would be "very difficult," "because Mosul is a very large city with a large number of civilians. But we will fight for it to the last, no matter what it takes."

26-year-old Ali Zeyd, another Mosul local, has a similar story. A soldier in the Iraqi government army, the young man stressed that the ongoing operation actually "involves thousands of Mosul residents."

© Sputnik / Hikmet Durgun
Ali Zeyd, another Mosul native, is fighting to free the city in the ranks of the Iraqi army

"This will give us an advantage when the troops get close to the city," the soldier added. "After all, we know the locations of Daesh militants and their facilities."

Zeyd explained that as a captive in the Daesh-held city, he had been "repeatedly tortured and humiliated by the jihadists."

"Most of my family lives in Mosul. I managed to escape the city a year ago. I wanted very much to join the operation to help liberate my home city from the terrorists. Last week we were able to liberate the large village of Bartilla. Now we are getting close to Mosul – it's only a few kilometers away. I hope we will be able to free the city in a few months."

Iraqi Troops Half Mile Away From Daesh-Held Mosul