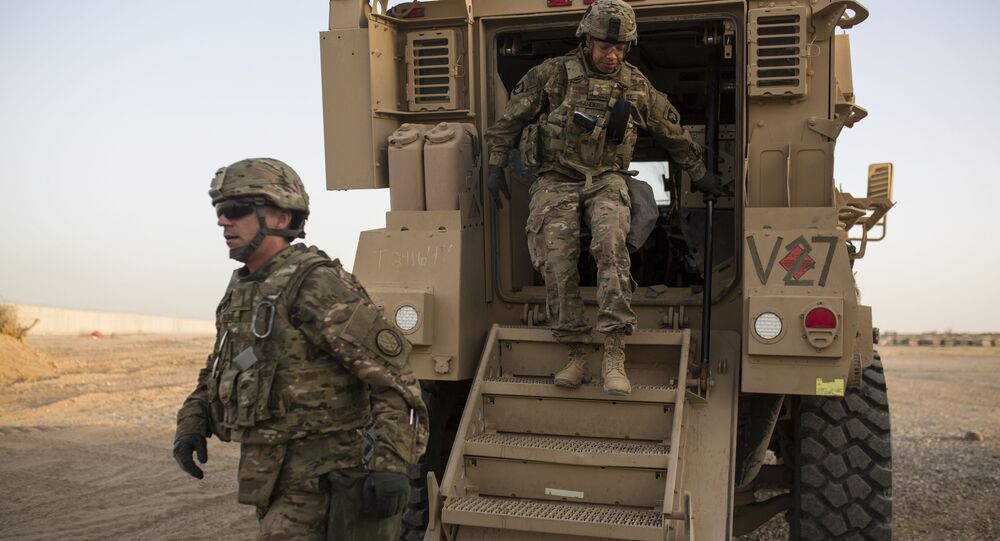 US Wants to Use Offensive in Mosul, Raqqa to 'Deal a Reputation Blow to Russia'

The United States and its allies are bracing for an assault on the two de-facto capitals of Daesh, Mosul, Iraq and Raqqa, Syria. Political analyst Alexander Sotnichenko told Radio Sputnik that these plans are directly related to Washington’s interests in the region.

In addition to the Iraqi city of Mosul, the US and its allies are planning to launch an assault on Raqqa, the so-called capital of the Daesh caliphate.

© AP Photo / Marko Drobnjakovic
What's the Rush: Pentagon Waging 'Strange War' in Mosul and Raqqa
Earlier this week, Pentagon’s chief Ashton Carter confirmed that an offensive on Raqqa would begin in weeks. The campaign is expected to be launched in 2016.

The operational plans were discussed at a meeting of 13 coalition defense ministers in Paris. The Raqqa operation is expected to take place alongside the liberation of Mosul.

The plans of an offensive at two Daesh-held cities at the same time are related to the US immediate interests on the ground, said Russian political analyst and specialist in the Middle East Alexander Sotnichenko.

"In the current situation, the US has two main goals. First, Washington wants to consolidate the American public prior to the presidential election. The goal is to demonstrate that the US is fighting global terrorism while 'authoritarian' Russia is trying to strip Washington of the status as the global leader in fighting terrorism," Sotnichenko told Radio Sputnik.

© Sputnik / Hikmet Durgun
'Unsavory Mix': Liberating of Mosul Will Not Bring Iraq's Troubles to an End
The White House needs a major military victory before the November election, he added.

During its military campaign in Syria, Russia helped the Syrian Army retake the ancient city of Palmyra from Daesh. At the same time, the US has had nothing to boast in Syria and Iraq.

"This is why the Americans want to take over the two main Daesh-controlled cities. If they succeed they could they say they did everything while Russia did nothing," the expert suggested.

The assumption was echoed by Elena Suponina, an analyst at the Russia Institute for Strategic Studies.

© Sputnik / Michael Alaeddin
Western Countries Use Militants to Achieve Own Goals in Syria – Assad’s Aide
"Political motives clearly include a wish to time the operation so that it would coincide with the presidential election in the US. It is extremely important for US President Barack Obama to show that he achieved at least some success in the Middle East," Suponina said in an interview with RIA Novosti.

The second goal, according to Sotnichenko, is closely tied with the future of the Syrian campaign and the Syrian civil war.

"The US and its allies in the Middle East are not interested in ending the war in Syria. They want the war to continue and they don’t any winners in this war. If an operation in Raqqa begins it will only prolong the conflict," he said.

Currently, Mosul is not sealed off and Daesh militants are trying to retreat. According to the expert, Washington would make an attempt to reach an agreement with the terrorists, offering "tempting goals" to them.

© AFP 2021 / SAFIN HAMED
Iraqi Operation to Liberate Mosul to Include a 'Corridor' for Daesh Militants Fleeing to Syria
Earlier this month, before the Mosul offensive began, a source in military and diplomatic circles in Moscow told RIA Novosti that Washington and Riyadh planned to establish a corridor to let militants safely leave Mosul.

"More than 9,000 Daesh fighters from Mosul will be redeployed to eastern Syria to carry out a large-scale offensive which will involve among other things taking control over Deir ez-Zor and Palmyra," the source said.

Sotnichenko suggested that such a scenario is highly possible, taking into account the US interests in the Middle East.

"Mosul is a big city, its current population is over one million people. There are over 10,000 Daesh militants. I think that a simple assault on Mosul will not be successful. I guess there will be some agreement, according to which Daesh fighters will retreat to Syria, thus reinforcing terrorist forces there," the expert said.

According to him, in Syria, Daesh may have two "tempting goals" to restore its "bloody reputation."

"Daesh militants may try to take over Deir ez-Zor or retake Palmyra. The US may be interested in such a scenario because it succeeds this will deal a heavy reputation blow to Russia," he concluded.