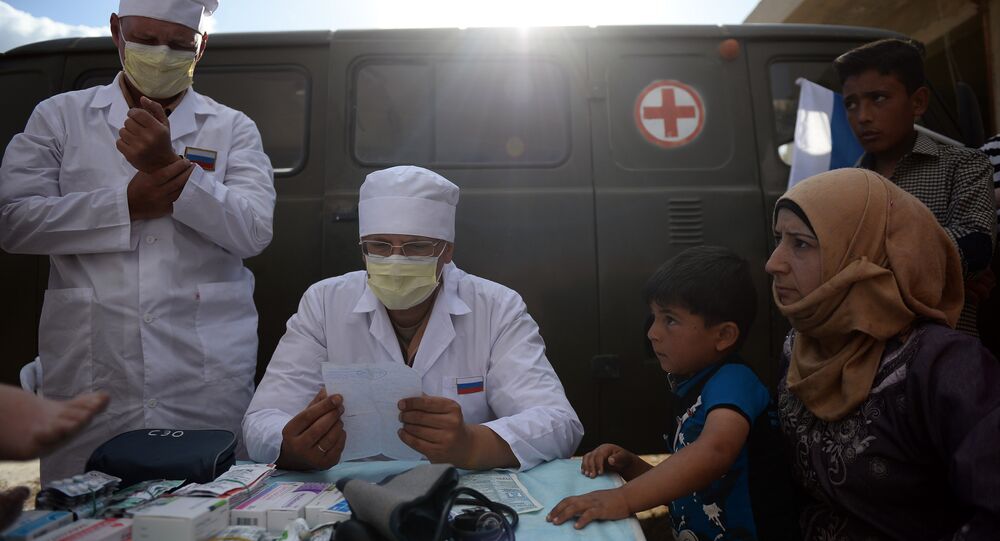 The mother of a Syrian girl, Sidra Zaroour, who lost both her legs during shelling in Aleppo, has expressed gratitude to the Russian doctors for her rehabilitation and treatment.

© REUTERS / Abdalrhman Ismail
Syrian Army Eliminates 500, Injures 1,000 Militants in Aleppo in 24 Hours
Sidra Zaarour, her parents and sisters came under fire in Aleppo on April 16. The terrorists attacked the district where Sidra’s family was located. One of the bombs exploded next to the girl, killing her elder sister and nephew right before her eyes.

Sidra lost both her legs on that day. She was seriously wounded and deeply traumatized. In early June, she was taken to Moscow after the decision was made by the Russian Defense Minister, General Sergei Shoigu.

On Saturday Sidra was returned home to Syria after treatment and rehabilitation in the Russian Children's Clinical Hospital (RCCH).

The 12-year-old girl and her family were returned on a military airplane to the Russian Hmyemim air base in Syria. “I am very happy to be home. In Russia, they really helped me. I can walk again and play. I really want the militants to be gone forever. Why have they come to shoot at us? We had a very good life without war. Those who are helping them, take them away,” Sidra said.

Talking about her experience in Moscow, Sidra said that during the five months of treatment in Russia, she met a number of young patients at the hospital. She became friends with those children and they helped her learn Russian. She also learned to draw and play football.

“Most of all I liked to watch Russian cartoons, especially ‘Nu Pogodi.’When I grow up, I will go to Russia and there I will become a children’s doctor,” Sidra said.

Sidra has almost completely adapted to her new dentures and will once again be able to attend school.

“Thanks to Russian doctors today my daughter feels like a whole child again. She is communicating, playing with peers and thinking about the future. There is no such opportunity for this type of treatment in Syrian hospitals,” Sidra’s mother Maida Hamra said.

She also thanked the Russian military for transporting Sidra on a helicopter and airplane to Russia. “Until now, it was hard to believe that so many people and equipment were deployed in order to save one little girl,” Maida said.

Sidra's mother added that she has already lost her eldest daughter and three-year-old grandson in this war. “These are ordinary terrorists who spare neither children nor the elderly or women. How can there be any justification for such monsters?”

“I believe that the war will be over if America and its president stop protecting them. I would like to ask US President Obama: Why did you bring war to our land? Why did you destroy the lives of millions of peaceful Syrians? The terrorists that deprived my baby girl of her health appeared in Syria because of you. Stop helping them and take them away from here!” Maida exclaimed.

The armed conflict in Syria has been ongoing since March 2011. The government troops are fighting various factions of terrorists and armed groups. According to the data provided by the United Nations the Syrian war has taken the lives of about 300 thousand Syrians.