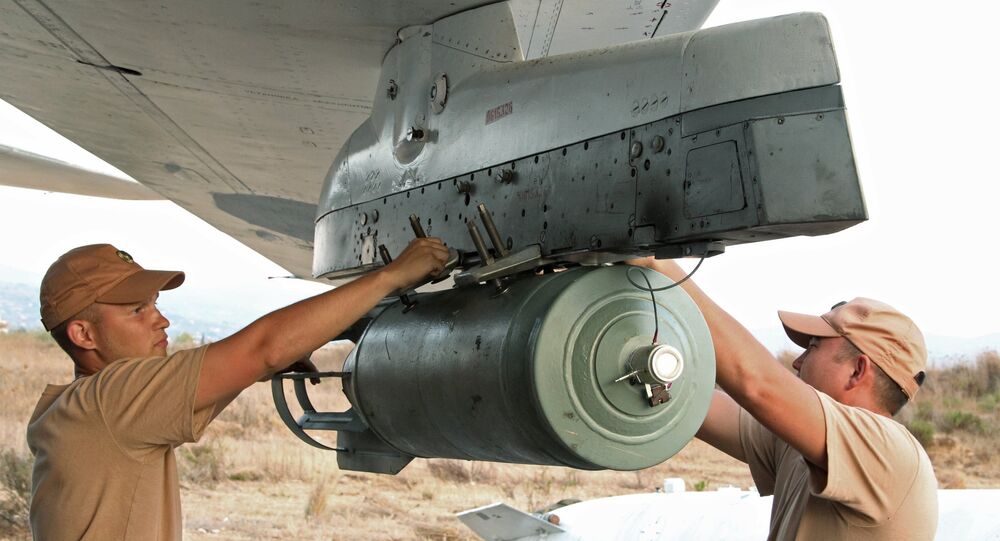 One of the largest German newspapers, Das Bild, seriously claimed that there are "good" and "bad" bombs that are being dropped on Middle Eastern countries.

© Sputnik / Michael Alaeddin
Russia Wants to Help UN Bring Humanitarian Aid to Aleppo - De Mistura’s Special Advisor
According to the newspaper, the first ones were used in Aleppo by "bad" Putin whose goal is "to level the city with 300,000 residents to the ground in order to increase his personal power and that of his regime."

The good bombs, as the newspaper claims, are on the contrary used by the US and its allies in the Iraqi city of Mosul. Their motive, according to the article, is "to liberate the city of millions from the terrorist regime of Daesh."

The author, Julian Reichelt, made every effort to draw things black and white: he repeatedly contrasted the Russians with the Americans and even wrote odd comments in brackets, apparently making sure that the reader is "on the right side."

"Bombs are clearly better in the hands of those who respect elections, follow laws and are controlled by the free press (for example Obama), than in the hands of despots who react to criticism with violence and oppression and are not accountable to anyone (for example Putin)," the article said.

In his attempt to turn the situation upside down, the author went even further, saying that "American nuclear weapons have always been better than the Russian (Pakistani or Chinese) ones because they have been controlled by politicians who have much more respect for human life and the will of their voters."

Apparently, the author seems to have forgotten that the US is the country that killed 450,000 innocent people by dropping nuclear bombs on the Japanese cities of Hiroshima and Nagasaki.

In addition to his outstanding comment, the author also mentioned that Russian media, including Sputnik and RT, alongside with respected German experts like Jürgen Todenhöfer, Jakob Augstein and Gabor Steingart always distort reality and publicly spread lies. Apparently, Mr. Reichelt seems to ignore the fact that his controversial attempts to "demonize" Russia and "idolize" the West do not resemble much of "the truth" either.

West 'Should Form Alliance With Russia' to Help Assad in Syria