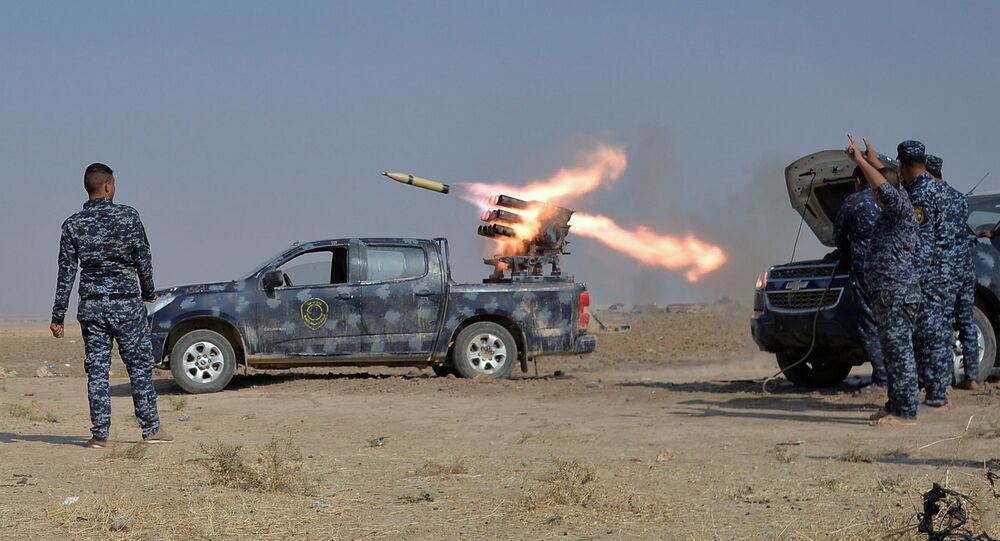 Iraqi security forces, assisted by the US-led coalition, Kurdish fighters and local militias, have advanced towards Mosul amid bitter fighting against Daesh and are currently located 1.2 miles away from the city center, Peshmerga General Mukamed Masid told Sputnik, adding that Baghdad-led forces could enter the city in less than a week.

"The Iraqi army has freed one small town and 12 villages located to the east and northeast of Mosul," he said. Baghdad-led forces "have moved very close to central Mosul. [The city center] is located 2 kilometers (1.2 miles) away."

© REUTERS / Ruairidh Villar/Save the Children
Washington Trying to Kill Two Birds With One Stone With Mosul Operation
Iraqi security forces have advanced towards Mosul from the south and the north, while Kurdish fighters have approached from the east. Baghdad-led forces are reported to be particularly active in the northeast.

General Mukamed Masid added that the militants are hardly defending themselves.

"Many have fled or blown themselves up in trucks rigged with explosives," he said. "The Iraqi army and Peshmerga fighters carry out attacks against Daesh, leaving many killed and taking some [militants] as prisoner."

The large-scale operation to free Mosul, formally known as "We Are Coming, Nineveh," was launched on October 16 after months of preparation. The capital of the Nineveh province has served as Daesh's stronghold since June 2014. It remains the last major militant-held bastion in the embattled country.

© Sputnik / Hikmet Durgun
Mukamed Maşıd
© AP Photo / Marko Drobnjakovic
What's the Rush: Pentagon Waging 'Strange War' in Mosul and Raqqa
The offensive, like similar anti-Daesh campaigns before, is expected to take months, but freeing Mosul, home to approximately 1.5 million civilians, will be especially challenging due to its sheer size.

General Mukamed Masid added that the militants are digging tunnels and trenches hundreds of kilometers long to avoid shelling. Daesh and other terrorist groups have employed this strategy in other towns under their control in Iraq and Syria, including al-Shaddadi and Sinjar.

"We have seen these trenches in villages that we have freed during recovery efforts," he said.

Mosul Civilians Caught Between the Devil and the Deep Blue Sea