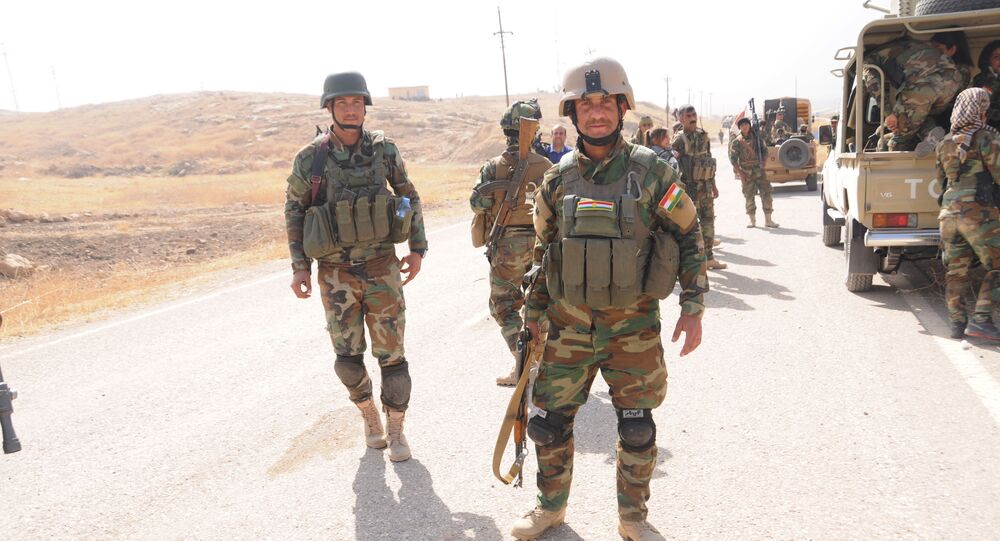 Helgurt Hikmet, the Press Secretary of the Ministry of Peshmerga in the Iraqi Kurdistan region, spoke to Sputnik about the situation in Mosul and involvement of thousands of Peshmerga soldiers in the fight against Daesh.

© AP Photo / Khalid Mohammed
Peshmerga Commander to Sputnik: Daesh Already Experiences Heavy Losses in Mosul
“As part of the operation, clashes with Daesh continue. Within 3 days on the front line of Hazyr, the jihadists liberated nine villages. Currently we are trying to clean up our border from Daesh. We are not going to withdraw our troops from the territories liberated from the terrorists as it is — Kurdish territory,” Hikmet said.

He further said that soon the military action in Ba`shiqah and other areas will begin and the operations will be carried out in various stages.

“In the liberation of Mosul overland only the Iraqi government’s army and Peshmerga forces will take part. The US and other coalition member countries will provide technical support and carry out air strikes.”

Talking about Turkey’s participation in the operation, Hikmet said that it is not up to them to decide.

He further said that a part of Peshmerga force is currently located 20km and 7 km from the center of Mosul.

“At the Hazyr front, 4000 Peshmerga fighters are involved in the battle against Daesh. In the near future, action on other fronts will start where thousands of Peshmerga soldiers will fight against Daesh,” the press secretary said.

Talking about foreign aid, Hikmet said that Canada, Germany and France have provided the Peshmerga force with arms. However, in order to achieve success over Daesh, they are in need of heavy artilley.

“A few days ago I met with the representatives of the Turkish consulate in Erbil. They told me that the Turkish side will assist in treatment of wounded Peshmerga soldiers during the Mosul operation. On the eve, 62 of our soldiers were brought to Ankara for treatment,” Hikmet said.

He could not confirm or deny the recent information about the flight of Daesh militants from Mosul to Syria. However, he pointed to the existence of such a route, which could be used by the militants to leave Mosul and enter Syrian territory.