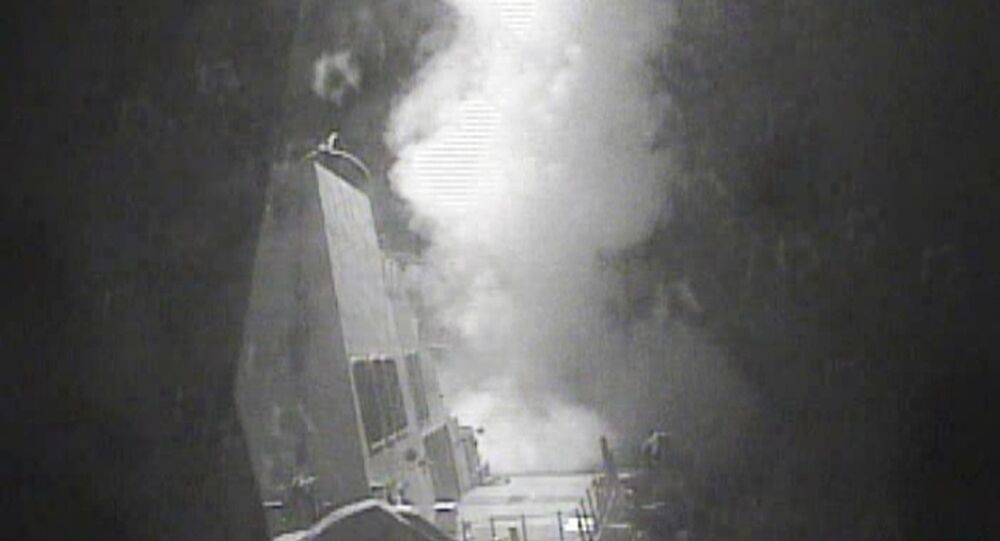 The US recently launched a missile attack on positions in Yemen, justifying the action by claiming -- perhaps erroneously -- that one of its warships was attacked by cruise missiles launched by the Houthi opposition in the country. But Washington’s cynicism runs far deeper, one expert tells Sputnik.

Radio Sputnik's Loud & Clear host Brian Becker was joined by Mark Sleboda, international security and affairs analyst, to discuss the reasons why the US bombed what they claimed were three radar installations in Yemen.

​The US bombed Yemen three times during the week, claiming that it was a response to missiles fired at the USS Mason by the armed Houthi political opposition faction in Yemen. The Pentagon, however, has now admitted that it's possible no missiles were launched at the US naval warship.

According to a Reuters report on Monday, the Pentagon said it is not sure whether the USS Mason was targeted by missiles launched in Yemen on Saturday.

© AP Photo / Osamah Abdulrhman
Moscow Expresses 'Grave Concern' Over Violations of Humanitarian Law, Civilian Deaths in Yemen
"We are still assessing the situation. There are still some aspects to this that we are trying to clarify for ourselves given the threat — the potential threat — to our people," Pentagon spokesman Peter Cook told journalists.

According to Sleboda, Yemen is a country that Westerners care little about, as there are no journalists on the ground and the ongoing war between the Houthis and a Saudi-led coalition armed with western-made weapons is covered with "thick fog." Information mostly comes from a few activists inside the country, reporting to the outside world.

"We don't know a lot," Sleboda said. "This is what we do know: the US is heavily involved in this war in Yemen […] The US is not only backing the Saudi invasion of Yemen. Obama has provided the Saudis with hundreds of billion dollars' worth of arms — twenty billion while this conflict was ongoing — including resupplying of the tanks and cluster bombs that Saudis are using up. But it goes much deeper than that. The US has active military involved."

The US has been providing Saudis with million pounds of fuel, intelligence resources, computers, communications, special forces on the ground, as well as air and sea support, in Riyadh's efforts to bomb Yemen.

Sleboda claimed that a recent airstrike on a Yemeni funeral in Sanaa was an intentional, "deliberate decapitation," considering the large number of Houthi leaders and generals in attendance.

Amid the ongoing airstrikes, using American-made jets and bombs and killing thousands of civilians, a recent announcement that the US government would review arm sales seems "a rhetorical slap on the wrist," he said.

"The idea that Saudi Arabia needs defending while they are invading Yemen is hysterical," Sleboda asserted.

© REUTERS / Peter Foley/File Photo
US Involved in Yemen 'Since the First Month of Fighting', Claims Human Rights Watch
He said that the manufactured outrage portrayed in the US media that was purportedly caused by alleged Houthi attacks on a well-armed Saudi-coalition that is blockading and starving 14 million Yemenis, is "extremely cynical and more than a little darkly hilarious."

The US government is funding the Saudi and Qatar regimes that are, in turn, funding Daesh — and Washington knows it, Sleboda said.

Self-Defense: A Pretext for US Escalation of War in Yemen – and Elsewhere