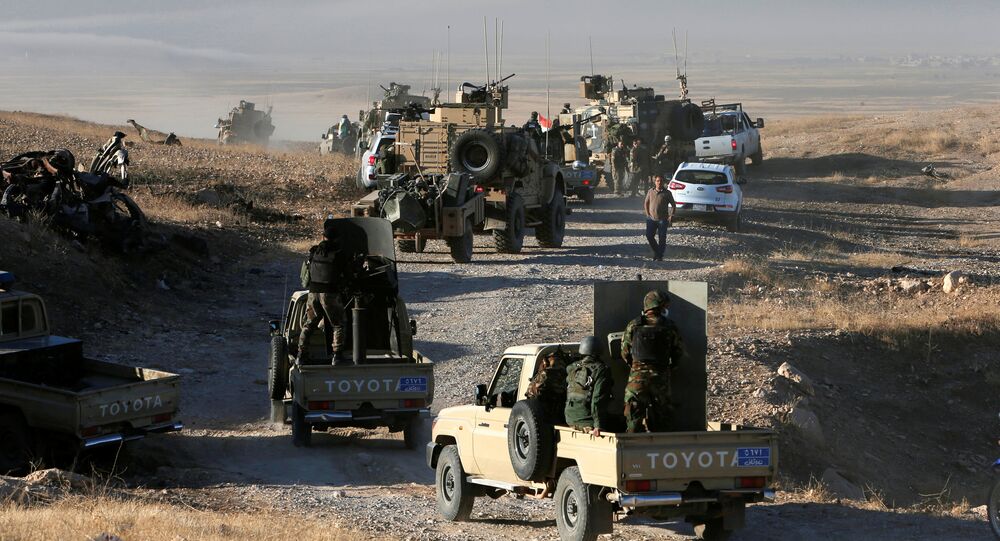 Said Mamuzini, the representative of the Arab Democratic Party of Kurdistan (KDP), spoke to Sputnik about the military operation underway in Mosul, saying that amid the military offensive, Daesh terrorists are fleeing the region with their families.

© AFP 2021 / AHMAD AL-RUBAYE
Mosul Operation Risks Becoming Even Bloodier Than Battle of Aleppo
“The main military operations are ongoing on the front line in Hazyr. The Peshmerga forces managed to liberate an area of 200 square km and a dozen of villages in the Mosul area from Daesh,” Mamuzini told Sputnik Türkiye in an interview.

The representative further said that the terrorists suffered considerable losses when the coalition aircraft carried out bombing campaign on the positions of jihadists and destroyed a significant number of artillery belonging to Daesh.

“In the ranks of Daesh there is panic right now. The jihadi commanders ordered the execution of militants who refuse to participate in the battles. Meanwhile, over the past few days since the operation many Daesh commanders fled from Mosul to Syria with their families,” Mamuzini said.

The representative added that it is assumed that the Mosul operation will soon be expanded by opening new fronts, including in Ba`shiqah.

On Monday, Iraqi Prime Minister Haider Abadi announced the start of the military operation to retake Mosul from Daesh militants.

On Saturday, aircraft of the Iraqi Air Force dropped leaflets on Mosul to warn the residents of the upcoming offensive. The government called on the residents not to panic and stay at their homes.

Earlier, Iraqi artillery and warplanes of the US-led international coalition conducted strikes on Mosul. An Iraqi military source said that the shelling was aimed to destroy certain targets prior to the main offensive. The Iraqi military estimates that the liberation of Mosul would take one to two weeks.

Liberation of Mosul Seems to 'Coincide With Upcoming US Presidential Election'

Moscow Unlikely to Be Invited for Mosul Consultations in Paris