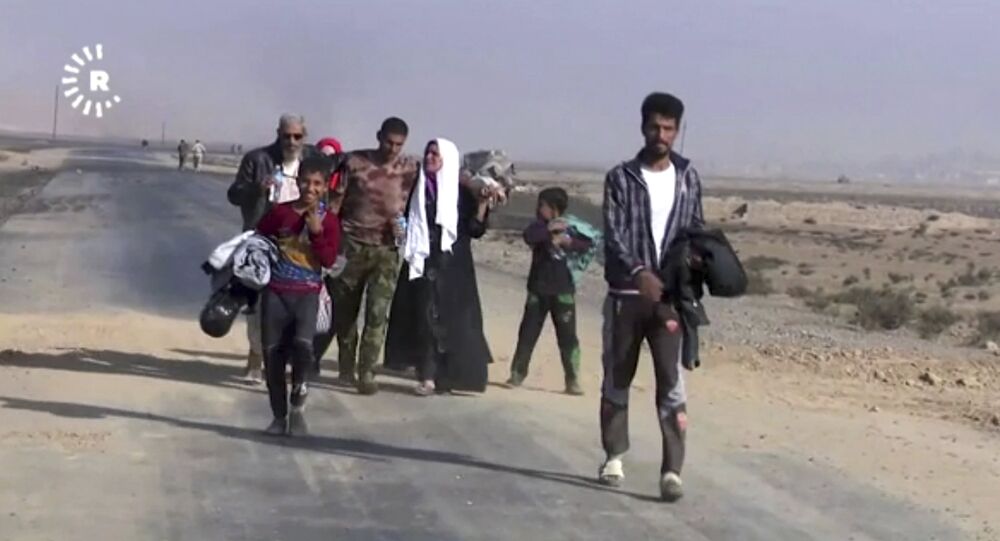 The report of the Amnesty International exposes the terrifying backlash against civilians fleeing the Daesh-held terrorists raising alarm about the risk of mass violations as the military operation to recapture the of Mosul gets underway, according to official statement.

© AP Photo / Khalid Mohammed
‘Steady Advance’ in Mosul Offensive Against Daesh Continues - US Coalition Envoy
WASHINGTON (Sputnik) — Sunni Arab civilians in Iraq who are fleeing their homes during the battle over Mosul will likely face torture, disappearance and death at the hands of the Shia-dominated government’s forces and Shiite paramilitary groups, the rights group Amnesty International said in a report Tuesday.

"The report ‘Punished for Daesh’s Crimes: Displaced Iraqis Abused By Militias and Government Forces’ exposes the terrifying backlash against civilians fleeing IS [Islamic State or Daesh]-held territory, raising alarm about the risk of mass violations as the military operation to recapture the IS-held city of Mosul gets underway," Amnesty said in a press release accompanying the report.

© AFP 2019 / SAFIN HAMED
Iraq Offensive to Retake Mosul Could Extend for Weeks
Amnesty based its warning on interviews with more than 470 former detainees, witnesses and relatives of those killed, disappeared or detained while fleeing other cities as Iraqi forces battled to expel the Daesh (also known as ISIL/ISIS/IS/Islamic State).

"As the battle to retake Mosul gets underway, it is crucial that the Iraqi authorities take steps to ensure these appalling abuses do not happen again," Amnesty’s Middle East and North Africa research and advocacy director Philip Luther said.

In Fallujah and other Iraqi cities freed from Daesh control, Shia militias and government police have posted gruesome videos of deadly torture in which uniformed Iraqis can be heard laughing and joking.