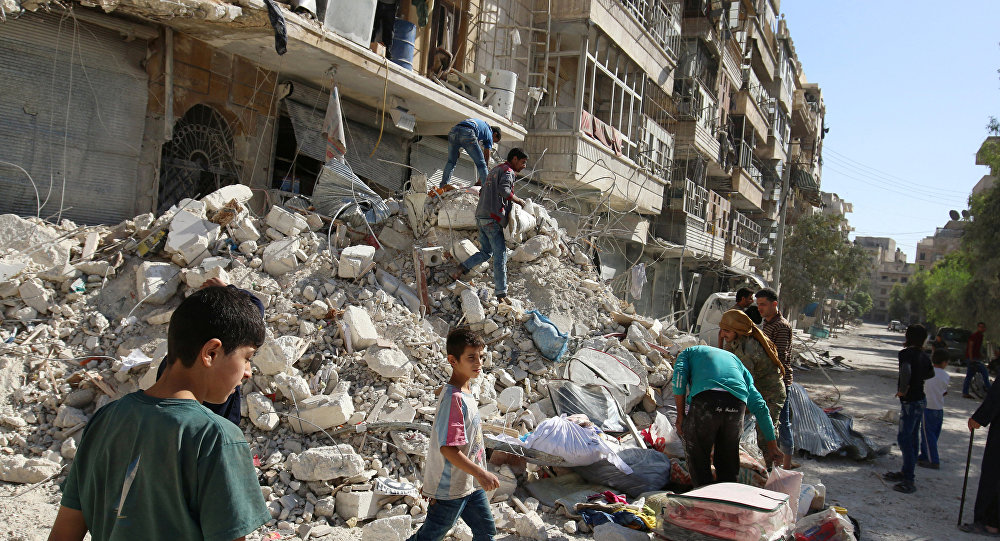 Eight-hour pause is not sufficient, adding that a longer pause is needed to insure the humanitarian aid delivery to all areas in Aleppo, according to the UN Office for the Coordination of Humanitarian Affairs (UNOCHA) in Syria.

© AFP 2019 / Youssef KARWASHAN
Russia Committed to Alleviating Humanitarian Situation in Aleppo, Syria
MOSCOW (Sputnik) — The United Nations is ready to proceed with the medical evacuation and aid delivery to eastern Aleppo following the Russian decision to introduce an eight-hour humanitarian pause in Aleppo on October 20, the UN Office for the Coordination of Humanitarian Affairs (UNOCHA) in Syria told Sputnik Tuesday.

The announcement on the humanitarian pause for Aleppo was made on Monday by chief of the Russian General Staff's Main Operational Directorate Lt. Gen. Sergei Rudskoy. Earlier on Tuesday, Russian Defense Minister Shoigu said the Russian Aerospace Forces and the Syrian Arab Air Force stopped airstrikes in the vicinity of Aleppo starting 07:00 GMT ahead of the humanitarian pause.

"As the UN we remain ready to proceed with the medical evacuation and provide lifesaving assistance if necessary security is provided. We have plans to evacuate the sick and the wounded from eastern Aleppo but, as you know, we have not been involved in these specific negotiations," UNOCHA said.

According to UNOCHA, the eight-hour pause is not sufficient, adding that a longer pause is needed to insure the humanitarian aid delivery to all areas.

"The UN repeatedly calls for a sustainable access to people in need. Our overall messaging on this, we would want something longer that we could not only evacuate people that need medical assistance but also deliver humanitarian aid to the areas that we really had not been able to reach," the UN coordinating body in Syria stressed.

Earlier on Tuesday, Russia's Ambassador to the United Nations Vitaly Churkin said that a longer ceasefire in the city of Aleppo was possible, but it has to be agreed on multilaterally.

Tarik Jasarevic emphasized that the fighting in Aleppo should stop immediately with all parties to the conflict bearing responsibility for the protection of the civilian population.

"Movement of civilians must be done on a safe, dignified and voluntary basis and should not be mixed with the UN plan to evacuate the sick and wounded," Jasarevic explained.

In September, the WHO called for the creation of humanitarian corridors in Syria's Aleppo to make possible the transportation of the sick and wounded from the besieged eastern part of the city.

Fighting in Aleppo has escalated as the Syrian Army and local militia forces managed to encircle the opposition militants in the city's eastern districts.