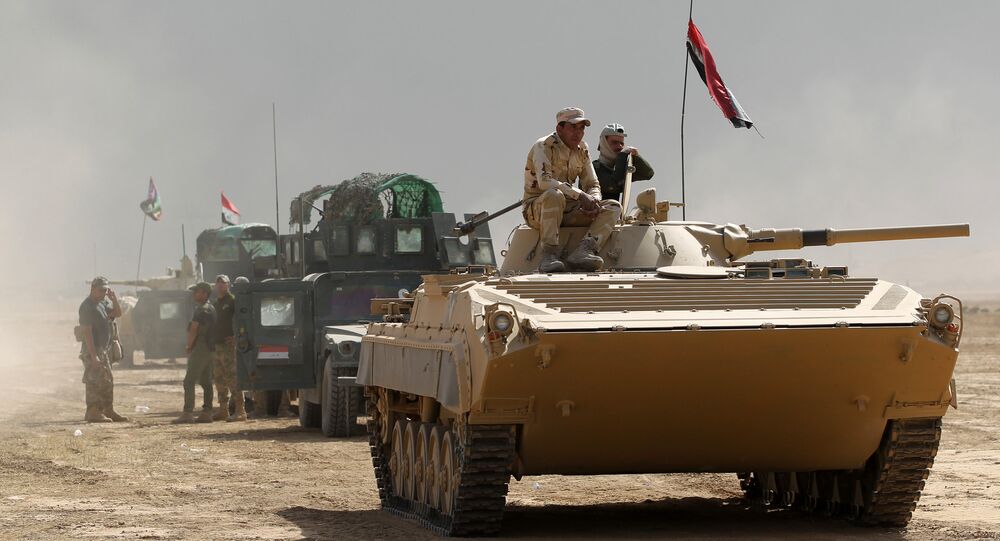 Commenting on the ongoing joint assault of Iraq's Mosul by the Iraqi army, Kurdish Peshmerga forces and the US-led coalition, experts explain why it is poised to become "ace of trumps in Clinton's pack of cards" and could even be the much talked about the US' "Plan B" in Syria.

© AP Photo / Bram Janssen
Mosul Offensive 'Risks Becoming Even More Bloody Than the Battle for Aleppo'
The offensive to liberate Iraq's second largest city of Mosul from Daesh terrorists which was launched by the Iraqi army, Kurdish Peshmerga forces and the aerial support of the US-led coalition of Monday is of vital importance to the US, according to the experts questioned by RIA Novosti.

While explaining why the operation has started right now, they noted that the outgoing US administration needs to demonstrate at least some success in its fight against terrorism in the Middle East.

"The only success of the US and its allies in this fight dates back to autumn of 2014 when they were able to defend Baghdad. In other words, President Obama has nothing to provide as an example of a successful fight against Daesh and he is now looking for at least one success he can point to," Alexei Fenenko, a senior researcher with the Russian Academy of Sciences’ Institute of International Security Studies told RIA Novosti.

However Sergei Demidenko, Middle East expert at the Institute of Social Sciences at the Russian Presidential Academy of National Economy and Public Administration said that the success of the operation will depend on how far the Americans are prepared to go.

"It depends on what the Americans are interested in, actually supporting the Iraqi government operationally or spouting propaganda and only pretending that they are doing something," he said.

© AP Photo / Khalid Mohammed
Peshmerga Commander to Sputnik: Daesh Already Experiences Heavy Losses in Mosul
He further explained that the Iraqi army is quite weak without external support and it will be very hard for it to gain any success on its own.

The experts also suggested that the Mosul offensive is part of the US election campaign and that the recapture of the city will become an "undefeatable ace of trumps in Clinton's pack of cards."

Some diplomatic sources earlier told RIA Novosti that the operation is in fact the much talked about the US' "Plan B" in Syria.

They said that US and Saudi Arabian special forces have agreed to provide Daesh militants with an opportunity to safely leave Mosul and further "transfer" them from Iraq to the east of Syria where they can launch massive attacks on Deir ez-Zor and Palmyra.

An ideal scenario for Washington would be the surrender of Mosul without any fighting, transfer of the terrorists to the east of Syria for continuation of their fight against Bashar Assad.

The mysterious US "Plan B" would then look like this: the US victoriously trumpets on about the arduous offensive of retaking Mosul while the jihadists who had covertly left the city go on with their fight against Russia and Assad.

The experts however doubted that the operation on retaking of the city would be any "easy walk."

© Sputnik / Andrey Stenin
Russia to Take Measures if Daesh Fighters Withdraw From Iraq to Syria - Foreign Minister
Mosul plays a key role for Iraq and the situation in the region due to several reasons, First, it is the second largest Iraq's city with the population of relatively 1,5 million people. Secondly, it lies on a strategic intersection of roads from Iraq to Turkey, Syria and Iran. Besides it is a serious economic center which rests on the oil business.

"It is a gateway to the oil reserves in the country's north. So I think the militants will try to hold onto it firmly," Demidenko told RIA Novosti.

Taking into account the vast opportunities for illegal smuggling of oil and oil products, there is no surprise that the city has been under control of the terrorists since 2014. Mosul has become the second capital of Daesh after Syria's Raqqa.

"There are a large number of Daesh militants in Mosul. There can be many of those who have been defeated in other Iraqi cities like Ramadi, Tikrit and Baiji," Head of the Kurdish General Staff Jamal Iminiki told Kurdish Rudaw Media Network.

The Kurds are also very cautious about elaborating on how soon Mosul can be recaptured.

© AFP 2021 / AHMAD AL-RUBAYE
Over 500,000 Children, Families to Face Extreme Risks Amid Mosul Offensive
"It is highly unlikely that the militants will leave Mosul without a fight. They could certainly lose if they stay but in case they leave Mosul without fighting they will actually leave Iraq and will have only Syria where they can go," Hoshavi Babakr, the representative of the Kurdistan Democratic Party in Russia and the CIS told RIA Novosti.

He said that there are many indications that the militants are getting ready for a serious defense: they are planting mines on the city streets and even on animals, preparing suicide bombers, even among children, digging underground tunnels and have blown up a number of bridges in the city to hamper the attack.

"The Kurdish Peshmerga has retaken eight settlements to the north and east of Mosul however it does not mean it will be an easy offensive," he said.

He further suggested that the militants do not have enough forces to be able to hold on these settlements thus all of them will retreat and concentrate in Mosul.