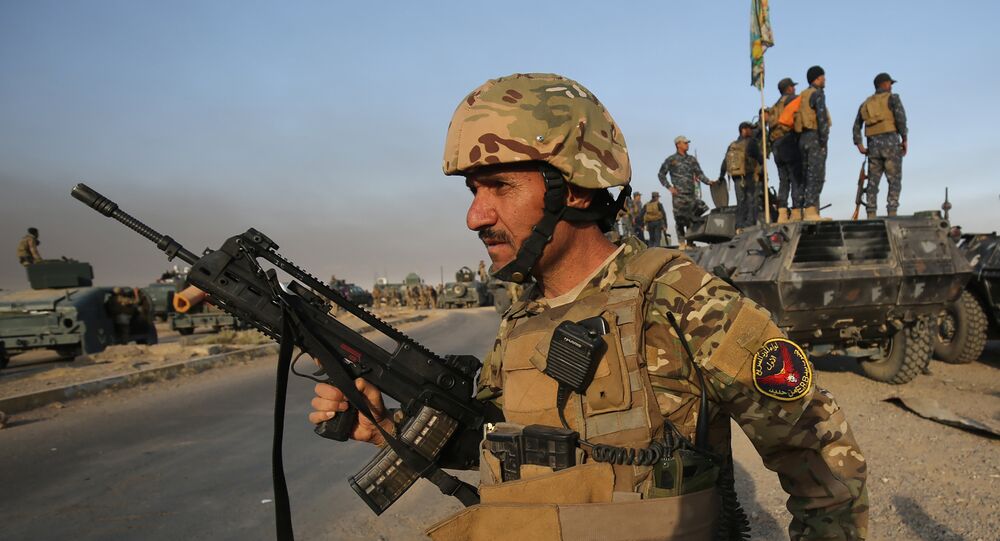 Iraqi and Kurdish forces and US-led coalition forces have begun their assault on the Daesh-held city of Mosul in northern Iraq. Geopolitics expert Semyon Bagdasarov suggests that the White House is anxious to capture the city ahead of presidential elections next month, to demonstrate the effectiveness of President Obama's anti-Daesh strategy.

Preparations for the operation began Saturday, as US artillery, backed by US Air Force Aircraft, began shelling the eastern approaches of the city. Daesh, in turn, started burning oil and tires in canals around the city to make the work of US aviation more difficult.

On Monday, Iraqi Prime Minister Haider al-Abadi officially announced the start of the long-awaited offensive to liberate the Daesh stronghold. Over 80,000 troops are involved in the operation, including engineers and logistical support troops.

© AFP 2021 / AHMAD AL-RUBAYE
Iraqi Politician Tells Sputnik Daesh’s First Line of Defense in Mosul Crumbles
Considering Daesh's extensive efforts to dig in around the city, and the presence of tens of thousands of civilians, the offensive is expected to be bloody, and last for several weeks, according to experts. Some quarters of the Iraqi military are more optimistic however, saying that the terrorist group could be routed from Iraq's second-largest city in as little as one to two weeks.

In any case, liberating the city will be a major foreign policy victory for the White House, and may give an edge to Democratic candidate Hillary Clinton, who President Barack Obama sees as his preferred successor. Clinton's Republican opponent Donald Trump has repeatedly criticized President Obama for not doing enough to fight Daesh, and for working against Russia rather than with it to root out and defeat the terrorist group.

Speaking to the independent online newspaper Svobodnaya Pressa, veteran Middle East expert Semyon Bagdasarov suggested that as far as the Washington is concerned, liberating the city ahead of the American election is a key priority.

Of course, "the composition of the forces conducting the assault is colorful," the analyst noted. "Erdogan rudely announced that the Turkish army will be involved in the assault regardless of the position of the Iraqi government. But the initiative is in the hands of the US."

For his part, military expert Anatoly Nesmiyan suggested that the Mosul operation is likely to be similar to the one in Manbij, Syria. That city, located 80 km northeast of Aleppo, was liberated this August by Kurdish-led Syrian Democratic Forces with support from the US after two-and-a-half years in Daesh hands.

"Manbij was taken in the easiest possible way – by being wiped off the face of the earth," the analyst noted. "The same will be done in Mosul. In the next two weeks it will be bombed, bombed and bombed some more. Since Mosul is a large city, it's likely to be bombed by sector, and liberated by sector. The jihadists there have started to burn oil – everything is covered in smoke, it isn't clear what's going on."

© AP Photo / Petros Giannakouris
At Least 70 Iraqi Soldiers Dead in Suicide Bomber Attack on Convoy in Mosul (VIDEO)
At the same time, Nesmiyan warned that the operation to liberate Mosul may result in severe civilian casualties.

"The city presently has about 800,000 people. Perhaps half of them will leave the city due to bombing. But half will stay, and no one knows what to do with them. There aren't many militants there – perhaps 15,000; some of them aren't even Daesh, but Baathists and the Sufist Naqshbandi Army insurgents. These are serious people, and part of the Baathist 'High Command of Jihad and Liberation'. [The latter] are a purely Mosul-based group. For about a week it will be impossible to say anything for certain. For now, we will see bombings and perhaps probing attacks."

In any case, the analyst suggested, as far as the media is concerned, if need be, "they can free some district, hang the flag there and show it on tv." The real fighting, meanwhile, will continue.

Over 80,000 Troops Involved in Liberation of Iraqi Mosul From Daesh