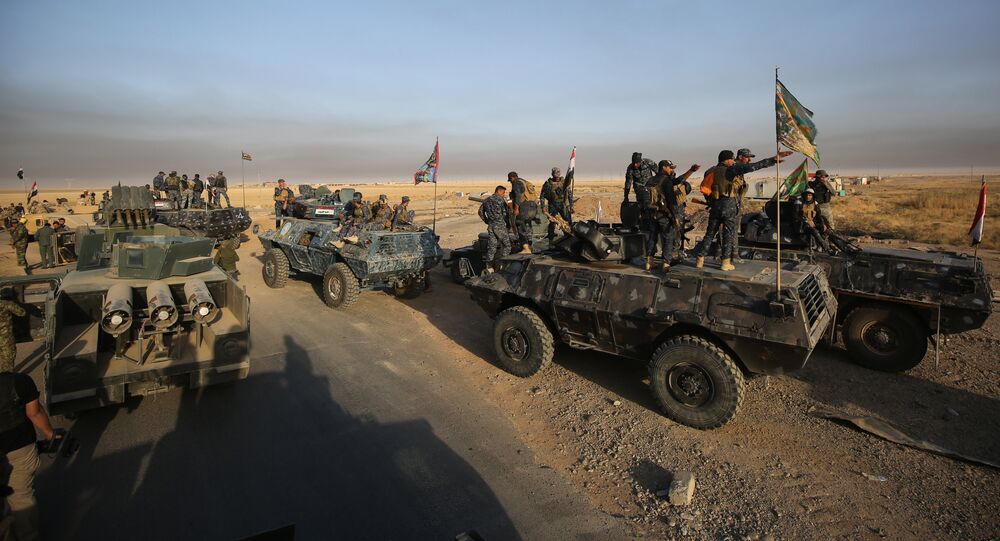 Daesh militants are taking heavy casualties as the Iraqi military and its allies continue their implacable advance on the city of Mosul.

© AP Photo / Khalid Mohammed
Peshmerga Commander to Sputnik: Daesh Already Experiences Heavy Losses in Mosul
And while the Daesh militants continue to offer fierce resistance, it appears that their zeal alone is not enough to defeat the forces they’re now facing at the doorstep of the besieged Iraqi city.

Mithal Al-Aulasi, head of an Iraqi political bloc called the Civil Democratic Alliance, told Sputnik that told Sputnik that all forces taking part in the liberation of Mosul are coordinating their efforts with each other and sticking to their battle plans.

"During the next few days the fighting will become harder as the confrontation will be shifting to urban warfare. Daesh’s first line of defense has fallen. In the next few hours the fighting should move into the city of Mosul itself as our forces are advancing very quickly," he said.

According to Al-Aulasi, all of Iraq’s political forces and social groups support the Mosul operation and eagerly await its victorious conclusion.

"The Iraqi armed forces, Peshmerga, federal police and several local militia groups are all taking part in the liberation of Mosul. The total number of our troops is nearly 60 thousand," he added.

Mithal Al-Aulasi also remarked that that the liberation of Mosul shouldn’t take much time, but the main goal will be to provide security to the civilians there and supply them with food.

Lebanon to Only Accept Refugees From Iraqi Mosul Under Exceptional Circumstances