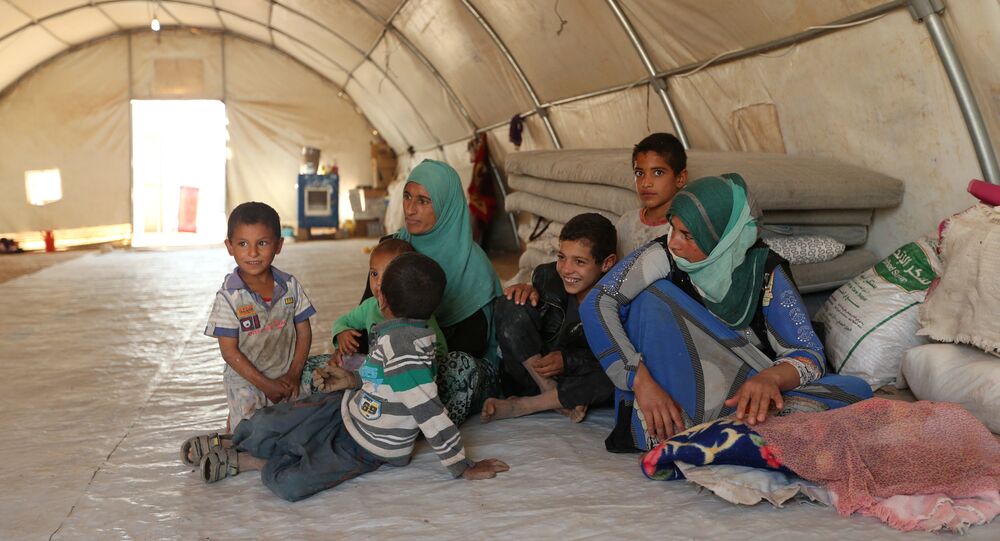 ICRC in Iraq warns that the operation to liberate Mosul from the Daesh may cause a humanitarian disaster forcing up to one million civilians to flee the city, according to ICRC in Iraq spokeswoman Sara Zawqari.

MOSCOW (Sputnik) — The International Committee of the Red Cross (ICRC) is ready to help 300,000 people in Mosul if they start feeling the city as US and Iraqi forces started intensive shelling in the city's eastern part to prepare for the military operation, ICRC in Iraq spokeswoman Sara Zawqari told Sputnik on Sunday.

"At the ICRC we are on the ground, we have an office in Iraq. Whatever happens, we can start immediately providing food, shelter, medical supplies the very same moment people start fleeing. We already have food and emergency supplies that can help almost 300 thousand people on the spot and over the course of the next week, we are also received more. Our storages are full, we are positioning goods, out staff is on the ground, so we are ready and as the Red Cross we always adopt to a new emergency," Zawqari said.

© REUTERS / Ahmed Jadallah/File Photo
Iraqi Air Forces Drop Leaflets Over Mosul to Warn Civilians of Coming Offensive
Also ICRC warns that the operation to liberate Mosul from the Daesh may cause a humanitarian disaster forcing up to one million civilians to flee the city, according to Zawqari.

"Humanitarian situation in Iraq, generally, is extremely difficult. There are more than 3 million people who are displaced, now once Mosul operation starts, we are expecting hundred of thousands fleeing. A number may reach up to a million. This is a huge number and all these people would need basic necessities: shelter, food, water, medical supplies. Once the operation starts, of course, people would try to leave violence and we at the ICRC will be there to the closest point, so we can help those who are fleeing with the basic necessities," Zawqari said.

ICRC called on parties to conflict in Iraq’s Mosul city to differentiate between civilian and military targets, according to ICRC spokeswoman.

Late Saturday, reports emerged that US howitzers deployed about 13 miles from the Mosul’s city center opened fire against the Daesh positions while the US-led coalition carried out a number of airstrikes.

"People, who are not part of the conflict, should be protected, also civilian buildings such as schools, hospitals and houses should be protected as well. Parties should always keep that in mind and differentiate between them and military ones. This is what we always try to call on all sides who are taking part in the conflict in Iraq or in Syria," Zawqari said.

Mosul, the second biggest Iraqi city, as well as a number of other northern and western Iraqi cities and towns, was seized in 2014 during an offensive of the Daesh extremists, outlawed in Russia.