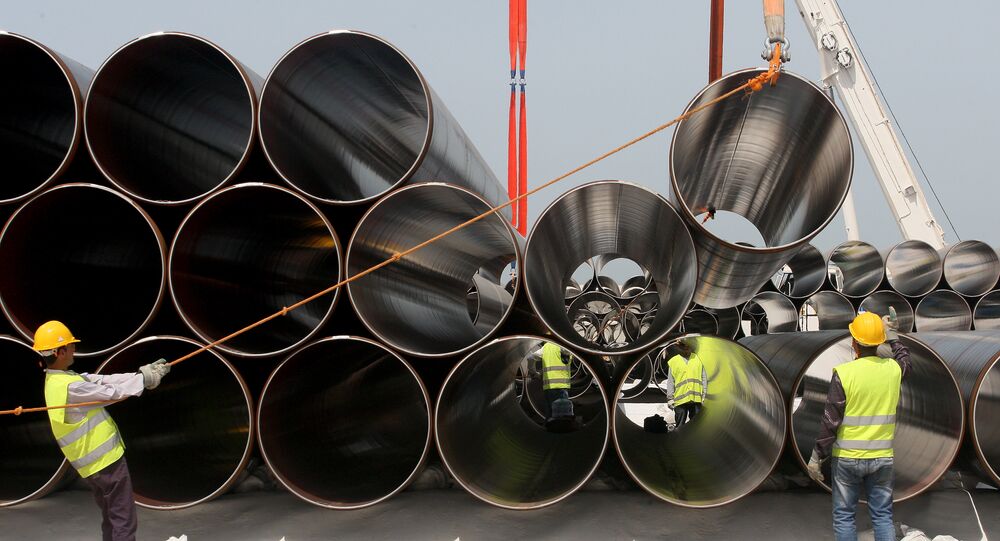 Tel Aviv and Ankara are due to start intergovernmental consultations on the construction of a pipeline in the Mediterranean Sea that will supply Israeli gas to Europe via Turkey, according to Yuval Steinitz, Israel's Minister of National Infrastructure, Energy, and Water Resources.

© REUTERS / Baz Ratner
Forget the Flotilla: Turkey-Israel Relationship Offers Peace, Economic Benefits
Speaking to reporters after his talks with Turkey's Energy Minister Berat Albayrak earlier this week, Israel's Minister of National Infrastructure, Energy, and Water Resources Yuval Steinitz said that Tel Aviv and Ankara have agreed to start intergovernmental consultations on the construction of a pipeline in the Mediterranean Sea to supply Israeli gas to Europe via Turkey.

In an interview with Sputnik, energy expert Tugce Varol Sevim underscored that the implementation of the project is unlikely due to a number of technical and geopolitical reasons.

According to her, the statements made by both sides merely indicate the intention of Turkey and Israel to develop cooperation in this sphere, while in reality the situation is much more complicated.

It's necessary to consider a whole array of factors, including the problems Israel has faced in the gas sector in recent years, which Tugce Varol Sevim said come against the backdrop of Israel's plans to sell its gas to Egypt.

"Given all this, an energy cooperation project between Turkey and Israel currently does not seem realistic. Rather, it can be assumed that both sides are using the issue as a tool for bilateral diplomatic rapprochement," she said.

She drew attention to the fact that the pipeline project was initiated by a consortium which includes two major Turkish companies.

"So it is safe to assume that the Turkish government is not directly taking part in the process; it just supports the project, but negotiations are being held at the level of private companies," Tugce Varol Sevim said.

She recalled that the project has yet to be endorsed by the West and that all the problems related to international law, including those related to Cyprus, should be resolved ahead of the pipeline's construction.

But the most important thing is that the project has yet to be supported by Russia, according to her.

"At the moment any [energy] project which is not approved by Russia has no chance of being implemented,"  Tugce Varol Sevim concluded.

In late January, Tel Aviv, Nicosia and Athens agreed to work on joint projects to export gas from the Eastern Mediterranean’s gas reserves, discovered in waters controlled by Israel and Cyprus, to Europe.

© REUTERS / Baz Ratner/File Photo
'Mistrust of Erdogan' Could Undermine Israel’s Reconciliation With Turkey
Ankara has been in talks with Israeli firms over a potential pipeline to carry Israeli natural gas to Turkey for several years, but the negotiations reached an impasse as relations between the two countries deteriorated.

Relations between Israel and Turkey deteriorated after the Freedom Flotilla incident in 2010, when a convoy of six ships, including one flying a Turkish flag, tried to approach the Gaza Strip with humanitarian aid and activists on board. The flotilla was blocked and stormed by Israeli forces; eight Turkish citizens were killed.

Currently, Israel's Leviathan gas field, first drilled in 2011, is one of the largest young gas reserves in the world, with some 3,450 trillion cubic meters of natural gas in undiscovered reserves.