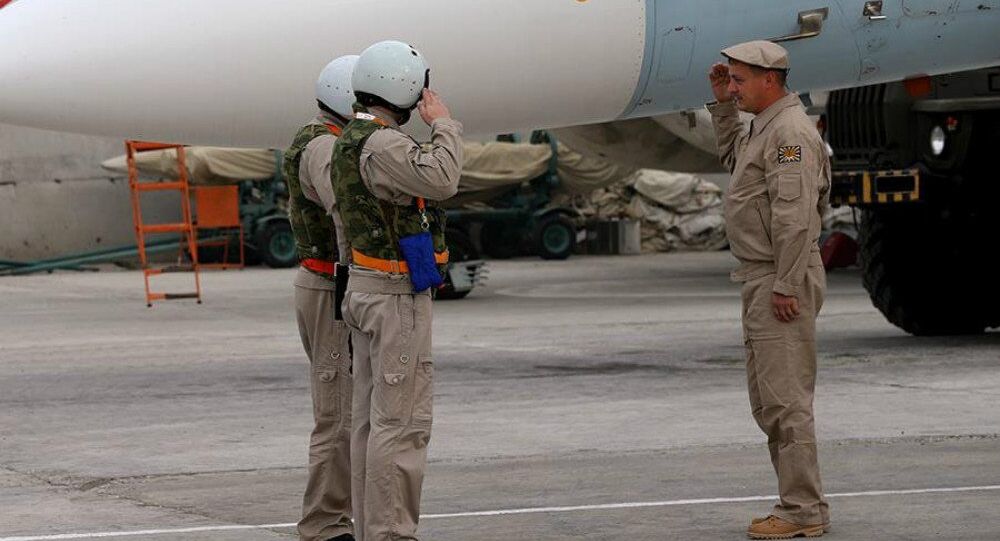 Russia in Syria 'Indefinitely': What It is All About

This week Russian President Putin ratified an agreement with the Syrian government that allows Russia to use the Hmeymim air base in Syria indefinitely. Sputnik delves into the details of the Russian facility in Syria's Latakia province.

© Photo : Russian Defence Ministry
Putin Ratifies Agreement on Russian Air Group Deployment in Syria
The agreement, which was signed between Moscow and Damascus on August 26, 2015, had been previously approved by both chambers of Russia's parliament.

Among other points, it notes that the Russian air group is stationed at the Hmeymim airfield in the Latakia province free of charge at the request of Syria.

Under the agreement, Russian military personnel and their family members are granted immunity identical to that provided by the Vienna Convention on Diplomatic Relations.

The document stipulates that the deployment of Russia's air group on the territory of the Syrian Arab Republic "answers the purpose of maintaining peace and stability in the region, is of defensive character and is not levelled against other states."

The structure of the air group is defined by Russia upon agreement with Syria. The group acts in accordance with the plans put forward and agreed upon by both sides.  Russia has the right to bring onto Syrian territory armament, ammunition, equipment and materials necessary for completion of the tasks of the air group and for provision of security and life-sustaining activities of the military personnel.

They are not subjected to any duties, fees or levies.

The military personnel of Russia's air group has the right to cross the Syrian border without encumbrance with the documents valid for travel outside Russia and is not subjected to security checks by Syrian border guards or customs officers.

The air group officers are relieved of any direct or indirect taxes.

September 30, 2016 marked one year since Russia launched its aerial campaign in Syria under the official request of the Syrian government.

According to Viktor Murakhovsky, editor-in-chief of Arsenal of the Motherland journal, since then the Russian air group has conducted about 16,000 sorties and over 54,000 air strikes on the positions of the rebel groups operating on the Syrian territory: their command centers, workshops which manufactured self-made explosives and ammunition, military hardware.

Russian Aerospace Forces have eliminated about 5,000 terrorists, 2,700 of whom were either of Russian or CIS origin, the expert told RT news channel.

The Russian air group has destroyed 125 tanks and several thousand trucks mounted with weapons, 200 objects of illegal oil infrastructure and has delivered over 1.5 tonnes of humanitarian aid.

"Back in summer of 2015, some western experts predicted that President Assad's government could hold-out for no longer than 5-6 months. However the involvement of Russia's Airspace Forces and their high-intensive airstrikes have profoundly changed the situation in Syria. And speculation on the soon collapse of Damascus has become quiet," Murakhovsky said.

"The presence of the Russian air group on the territory of the Syrian Arab Republic answers in full the purposes of maintaining peace in the region," member of Russia's Federation Council’s (upper chamber of the Russian parliament) Committee on Defense and Security Olga Kovitidi told RT.

"The ratification of the agreement on the indefinite presence of the Russian air group at the Hmeymim base will become a basis for its systematic and planned operations within the military campaign for the benefit of friendly Syria," she said.

Kovitidi also noted that the signed agreement establishes international legal norms which regulate the number of personnel and the terms of deployment and operation of the Russian air group.

Such agreements are the only legal instrument in the international practice for the use of foreign military bases. The implementation of this agreement will be Russia's practical contribution into the efforts of the international community to stabilize the situation in Syria and to fight against international terrorism, she stated.

Meanwhile Viktor Murakhovsky revealed that at the moment there are 16 Russian combat aircraft deployed at the Hmeymim air base: 12 Su-24M supersonic, all-weather attack aircraft and 4 Su-34 advanced fighter-bombers.

"On average, they perform 40-50 sorties per day, which is relatively inexpensive for the Russian budget," he told RT.

"In comparison, Russia's Airspace Forces have over 1,500 combat aircraft which spend about 2 million tonnes of fuel per year, not including the operation in Syrian. Thus the daily operations of 15-20 aircraft in Syria are insignificant," the expert said.

He also noted that President Putin has made it clear that there were no additional means allocated from the country's budget for this aerial campaign and that it keeps within the expenditures allocated by Russia's Defense Ministry to the operative and combat training.

The expert also noted that there are over 4,000 Russian servicemen currently on station at the Hmeymim base. In addition to the aircraft already mentioned, there are also Tu-22, Tu-95 and Tu-160 strategic strike bombers operating in Syria.