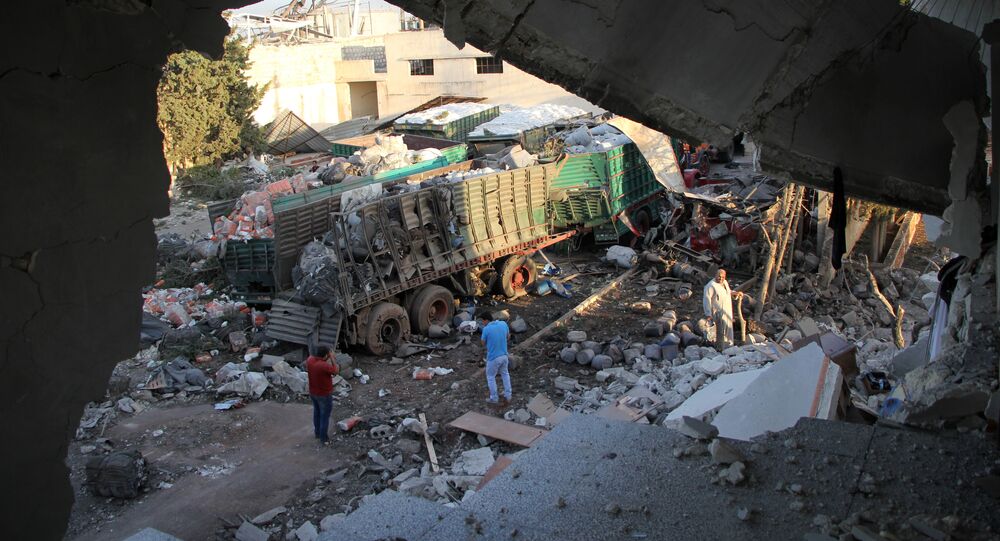 MOSCOW (Sputnik) — Speaking at the parliamentary debate on Tuesday dedicated to the Syrian issue, Johnson said Russia was responsible for bombing the UN aid convoy in Aleppo deliberately. According to the foreign secretary, the satellite photos available to public indicate that the attack was carried out from the air and in the darkness. He added that, since Syrian President Bashar Assad's troops are not able to carry out an attack in the darkness, all the evidence point at Russia.

"No Russian aircraft were in the area of the humanitarian convoy in Aleppo. It's a fact. And all the 'alleged' evidence…will not be worth a penny, if someone is really given access to them," Konashenkov said.

"Mr. Johnson, so would you disclose this 'open access' and show these pictures to someone else?" he added.

The spokesman said that some UK officials' "russophobic hysteria" has not made any impression and called Johnson's speech "a storm in a glass of muddy London water".

Konashenkov said that the Russian Defense Ministry has precise data about the situation when the convoy was attacked and knows the exact reason why "US colleagues' interest in this issue is fading."

According to the spokesman, it has been the third wave of accusations of Russia's involvement in the convoy attack and all the time "evidence" was either provided by al-Nusra Front terrorists or was subsequently refuted by Washington. In September, US Gen. Joe Dunford said that "Russians are responsible, I just don't know whose aircraft actually dropped the bombs".

© AFP 2021 / Omar haj kadour
September Attack on UN Aid Convoy in Syria Well-Prepared Hoax, Investigators Say
On September 19, a UN-Syrian Arab Red Crescent convoy carrying humanitarian aid for the Aleppo province was hit by a strike, according to the International Federation of Red Cross and Red Crescent Societies (IFRC). As a result, 18 of 31 trucks were destroyed and at least 21 individuals were killed.

The Russian Defense Ministry earlier published a video showing a rebel truck with a heavy mortar moving along the convoy.

Pressure on Assad, Russia Must Be Stepped Up Through Sanctions - Boris Johnson