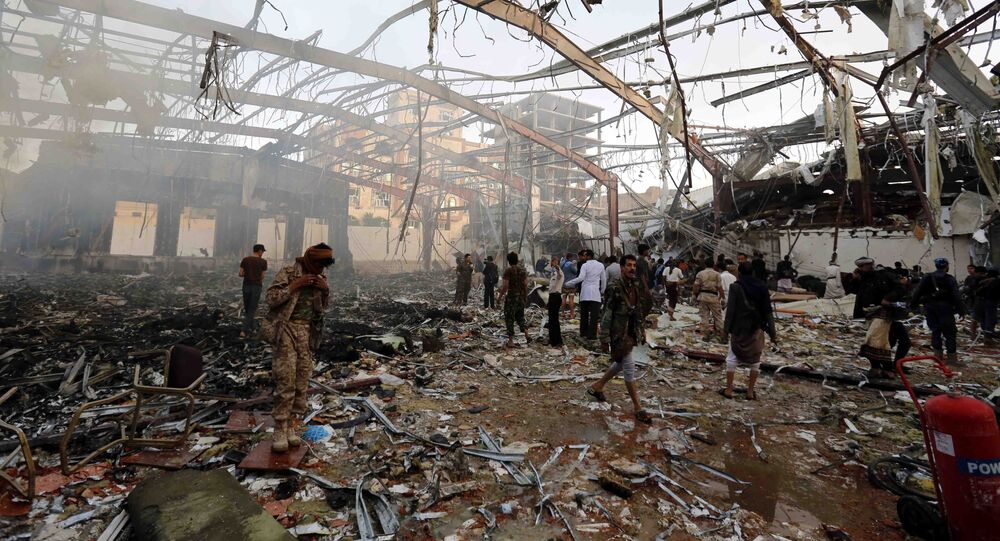 Photos taken by ITV News correspondent Neil Connery at the scene of Saturday’s bombed funeral in Yemen indicate the use of a US-produced Mark 82 bomb.

The Saudi-led coalition aircraft bombed a community hall in Yemen Saturday where thousands of people gathered to pay last respects to Sheikh Ali al-Rawishan, the father of the rebel-appointed interior minister. The jet struck the hall four times, leaving more than 140 people dead and over 520 people injured.

PHOTO: Found in the rubble of #Sanaa funeral hall strike, more evidence that it was US made Mark 82 bomb #Yemen — @HussainBukhaiti pic.twitter.com/ct1urn9uid

The Saudis first denied responsibility for the airstrike, but yesterday the alliance said it would invite US experts to participate in an "immediate investigation".

The US threatened to withdraw its military support to Saudi Arabia in the wake of the incident.

"US security cooperation with Saudi Arabia is not a blank check. In light of this and other recent incidents, we have initiated an immediate review of our already significantly reduced support to the Saudi-led Coalition," NSC spokesman Ned Price said in a statement.

At the same time, according to the Reuters, the Obama administration has been struggling to balance between a need to stay on friendly terms with Saudi Arabia and the risk of becoming a "co-belligerent" in the Yemen war under international law as that "would have obligated Washington to investigate allegations of war crimes in Yemen and would have raised a legal risk that U.S. military personnel could be subject to prosecution, at least in theory."

© REUTERS / Khaled Abdullah
Yemen Airstrikes: 'UK Putting Saudi Arms Sales Ahead of Human Rights'
The US has repeatedly come under fire for supplying the Saudis with military equipment and training. Under the Obama administration, the US has sold over $115 billion worth of weapons to Saudi Arabia violating international humanitarian law and contributing to instability in the Gulf region.

Brookings Institute Senior Fellow, CIA officer, Bruce Riedel said in April that the US does have the power to end the war in Yemen, "If the United States of America and the United Kingdom tonight told King Salman, ‘this war has to end,' it would end tomorrow because the Royal Saudi Air Force cannot operate without American and British support."