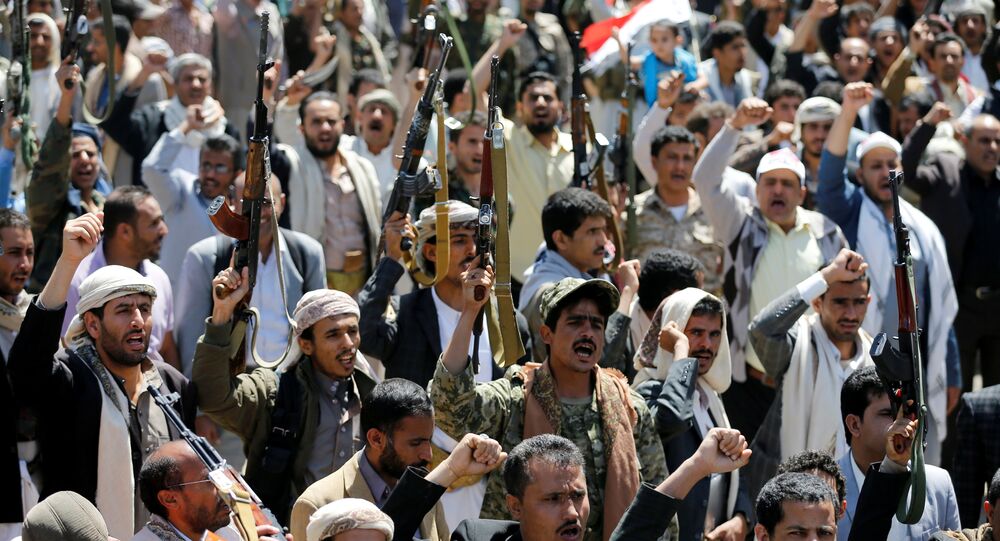 On Sunday, tens of thousands of armed demonstrators crowded outside the United Nations office in Yemen to protest the horrific targeted bombing of a funeral in the capital city of Sana'a by the Saudi-led coalition which many Houthis believe has been done with the tacit support of the UN.

© AFP 2021 / RAMI AL-SAYED
Battle for Syria: Daesh Affiliate Merges With Al-Nusra Front, US-Backed Rebels
The walkway outside of the United Nations office in Yemen's capital city of Sana'a was the staging ground for tens of thousands of angry, well-armed demonstrators who took to the streets to protest an airstrike by the Saudi-led coalition on a funeral which left over 140 dead and over 525 injured.

The massive rally called the "Volcano of Rage" began outside the UN Office in Sana'a with demonstrators chanting "Allahu Akbar! America is the Great Satan" and also called for the killing of Saudi Arabia's royal family according to reports from AFP. The demonstration comes in the wake of the Saudi bombing campaign on a funeral that left over 140 civilians dead and over 525 others injured.

The leader of Yemen's Houthi movement also took to the airways on Sunday calling for all able bodied men to carry out retaliatory attacks against the Saudi regime and laying the crux of the blame for the airstrike on the United States saying that Riyadh only strikes where Washington tells them to.

​In the face of fierce international condemnation, the Saudi-led coalition denied any role in the bombing attack — a somewhat unbelievable claim given that they are the only military coaltion with fighter jets in the region — and vowed to carry out an internal investigation.

The United Nations in a statement said that "the Humanitarian community in Yemen is shocked and outraged by today's airstrikes which hit the community hall of Al-Sala Alkubra hosting thousands of mourners taking part in a funeral ceremony."

"The Humanitarian Coordinator reminds all parties to the conflict that under international humanitarian law, they are obligated to protect civilians and civilian infrastructures," said the statement. "This violence against civilians in Yemen must immediately stop."

Despite the call for peace, rebel leader Mohammed Ali al-Huthi told the crowd, "After this massacre we are more determined to confront the assailants. Open the fronts with the Saudi enemy immediately" creating an imminent security risk for diplomatic personnel in the country and raising the very real possibility of a severe escalation in fighting in the coming weeks and months.