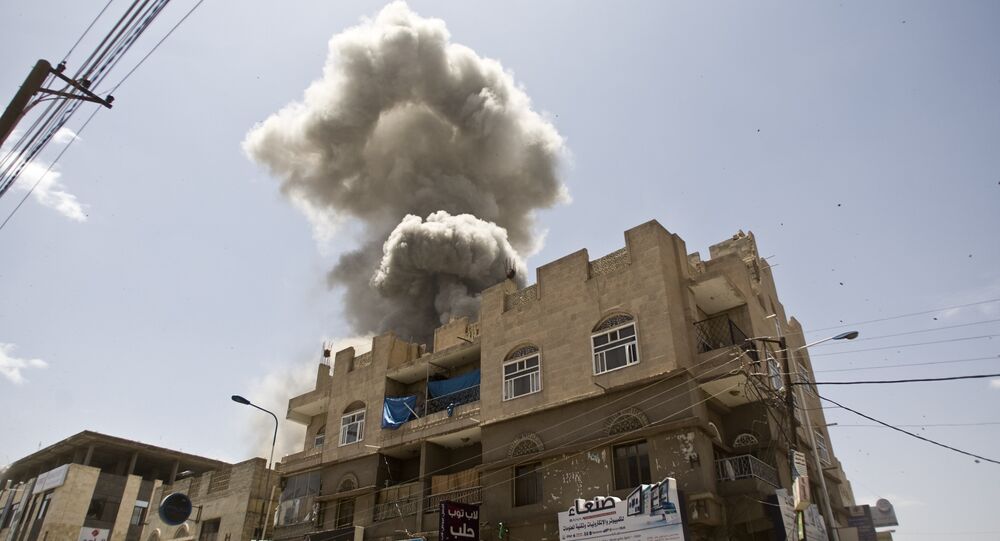 Saudi Arabia is "out of control," and only withdrawal of US support can stop its devastating bombing campaign in Yemen, Alexander Azadgan, a Professor of Strategic Global Management and International Political Economy, told Radio Sputnik.

On Saturday a funeral ceremony in the Yemeni capital Sanaa was hit by an airstrike suspected to be from the Saudi-led coalition. The UN said that over 140 people were killed and more than 525 wounded, while other media reports suggested 213 may have been killed.

In the aftermath of the funeral attack, Washington announced it will review its support for the Saudi-led campaign.

"In light of this and other recent incidents, we have initiated an immediate review of our already significantly reduced support to the Saudi-led Coalition," a US National Security Council spokesman said.

Azadgan told Radio Sputnik that the Saudi airstrikes in Yemen will continue until the US exerts "serious pressure" on Saudi Arabia.

The "new cadre" in the Saudi Arabian government, especially the son of King Salman, Crown Prince Mohammed Bin Salman, "thought they could pursue their own policy in the Middle East," the expert said.

"They are seeing some major alerts by Washington that if they do such things, they are going to get into big trouble. Washington is bringing other issues into the fold, such as investigating 9/11 and who was really behind that. So I think they are very threatened by that," Azadgan said.

"The US is going to jump at this opportunity, where 140-150 people were butchered at this funeral, in order to force Saudi Arabia to watch its foreign policy. The Saudis seem to be out of control."

© AFP 2020 / MOHAMMED HUWAIS
Death Toll From Saudi Airstrike on Yemeni Funeral Ceremony Exceeds 200
"Up until four or five years ago, they were a proxy state for US foreign policy. Now, ever since this new king came to power, they are running head to head with the US," Azadgan said.

"Yemen is part of a bigger prize, a bigger geo-sectarian conflict that's going on in the Middle East."

The situation in Yemen escalated further on Sunday when ex-president Ali Abdullah Saleh, a key ally of the dominant Houthi movement who commands soldiers that defected from his successor's government, called for revenge attacks on Saudi Arabia.

"All of our sons and fighters must head immediately to take revenge by escalating armed attacks in the borders with Saudi Arabia," said Salah, a former ally of Riyadh who left power in 2011 as a result of a Saudi-brokered initiative to restore order amid popular protests.

© AP Photo / Hani Mohammed
Houthi Rebels Carry Out Ballistic Missile Attack Against Saudi Arabia
Salah was replaced by his Vice-President Abd Rabbuh Mansur Hadi, who was in turn toppled in February 2015 after the Shiite Houthi movement took control of the capital, Sanaa, and some other major cities.

The ousted, Saudi-backed president fled to Riyadh. In order to restore Hadi to power, Saudi Arabia launched a devastating bombing campaign with the military support of nine Arab states, and US backing.

In August the UN stated that over 3,700 civilians had been killed and over 6,500 injured since March 2015 as a result of the ongoing civil war in Yemen.