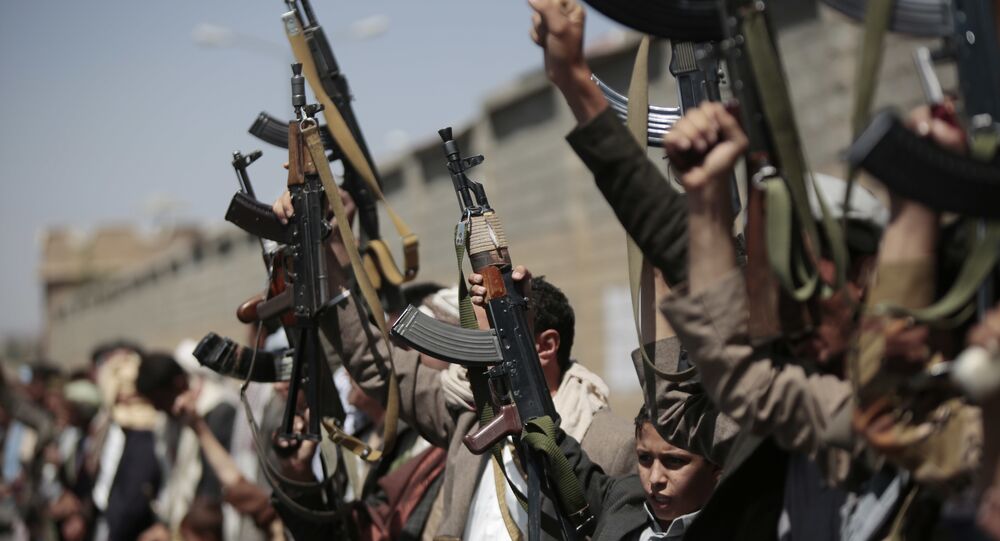 Khaled Saeed, a member of Houthi Supreme Political Council and participant in peace talks, said that Yemen is under the siege "from land, air and sea" while the United Nations is failing to address the situation.

© REUTERS / Khaled Abdullah
People in Yemen’s Sanaa Protest Airstrike on Funeral in Front of UN Office
MUSCAT (Sputnik) — Houthi rebels refuse to take part in a negotiation process under the auspices of the United Nations until the “massacre” in Yemen stops, Khaled Saeed, a member of Houthi Supreme Political Council and participant in peace talks, told Sputnik on Sunday.

On Saturday, the airstrike hit a funeral ceremony in Sanaa. According to UN estimates, the attack claimed over 140 lives and left more than 525 people wounded, while media suggested that 213 people may have been killed. The Saudi-led Arab coalition denied allegations of the Houthi rebels that it was involved in the incident.

According to Saeed, the airstrike “crossed the boundaries of morality and humanity.”

© REUTERS / Dan Kitwood/pool
UN Secretary General Condemns Attack on Funeral in Yemen Blamed on Saudi Arabia
Yemen is under the siege "from land, air and sea" while the United Nations is failing to address the situation, he noted.

Last peace talks between the Houthi rebels and Yemeni government, which took place in Kuwait in August, failed. The delegation of Houthi rebels has been stuck since then in Oman after the Saudi-led coalition blocked the aircraft with the Houthi delegation trying to return to Yemen.