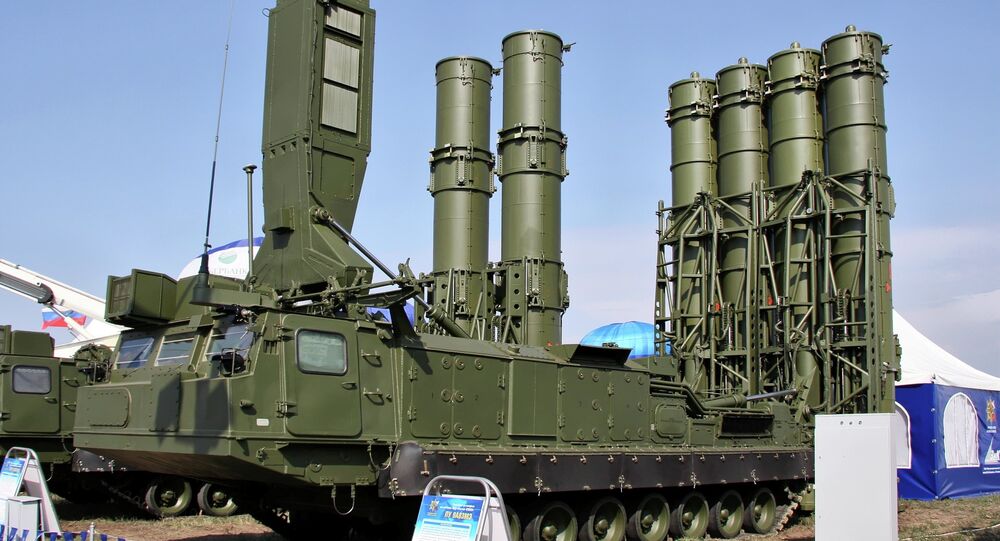 Russia has recently warned that its S-300 and S-400 air defense systems are up and running in Syria following leaked reports on the US' intentions to bomb Syrian airbases. As Russia’s Defense Ministry cautions the US-led coalition against carrying out airstrikes on the Syrian army, military experts reveal the defense capabilities of the systems.

© AFP 2021 / AHMAD ABOUD
Russian MoD Has Intel Suggesting CIA, Pentagon Behind Media Leaks About US Strikes on Syrian Army
"The S-300 appeared [in Syria] after experts close to the American establishment started leaking information…that the US could hit Syrian airfields with cruise missiles," Foreign Ministry spokesperson Maria Zakharova said in an interview with Russia's Dozhd TV channel on Friday.

Earlier on Thursday, Russia's Defense Ministry also commented on the revelations, saying it could be a preface to real action.

"A number of Western media outlets have published "leaks" about the talks held in the White House administration about the possibility of missile launches and airstrikes on Syrian army positions," the ministry spokesman, Major General Igor Konashenkov said in a statement.

"As history has shown, such "leaks" often prove to be a preface to real action," he added.

The Major General also warned that Russia has S-400 and S-300 air-defense systems deployed to protect its troops stationed at the Tartus naval supply base and the Hmeymim airbase in Syria. The effective range of the weapons may be "a surprise" to all unidentified flying objects.

"Russian air defense system crews are unlikely to have time to determine in a ‘straight line’ the exact flight paths of missiles and then who the warheads belong to. And all the illusions of amateurs about the existence of ‘invisible’ jets will face a disappointing reality," Konashenkov added.

© Sputnik / Ramil Sitdikov
Russia Placed S-300 Missiles in Syria After Learning of US Plans to Bomb Airbases
Lieutenant General Aitech Bizhev, Russian Air Force deputy commander-in-chief said that the efficiency of the anti-aircraft missile system depends on the size of its missile load.

"S-300, S-400 usually have three missile stockpiles. It is a lot, due to the high probability that the target will be destroyed with the first hit. Experience from brush-fire wars shows that if during a massive air strike 20 percent of the enemy aviation is destroyed with the first hit, it will stop any further military activity of the enemy," he told Russia's online newspaper Vzglyad.

"I highly doubt that our suggested enemies have a kamikaze (suicide pilots) squadron within their aviation units," the Lieutenant General added.

He also commented on the words of Russia's Defense Ministry spokesperson about "illusions of amateurs about the existence of "invisible’ jets".

"To be able to suppress Russia's air defense systems deployed in Syria, there should be a whole complex of measures put in place, including one to outflank the continuously operating radar field, thanks to which no flying object can go unnoticed," he said.

The expert explained that any flying object is already "seen" at 600-700 km distance from the air field. As soon as it appears within range, the anti-aircraft battalions are put on combat alert. These include not only anti-aircraft missile systems, but also cannon-missile systems, similar to well-known Pantsir.

© AP Photo / Lefteris Pitarakis, File
US 'Hardly to Go to the Length of a Full-Fledged War' in Syria
Therefore, any unidentified targets flying in the direction of Hmeymim airfield will be destroyed upon entering into the air defense engagement area.

"Our missile defense systems are capable of destroying any aerial target at any speed regardless any counter measures or jamming. The engagement area of our air defense systems is up to 400 km," he said.

"As we know, usually the aviation of a suggested enemy prefers to carry out destructive missile saturation without entering into the air defense engagement area, to be able to open corridors by punching a hole in the aerial defense," he explained.

"This is exactly why S-300 VM2 has been deployed in Syria," the Lieutenant General said confirming the warnings provided by Russia's Defense Ministry.

He also assured that Russia's aerial group won't wait on the air field but will disperse into the air to rebuff the attacks.

"I don't envy those who risk flying into the engagement area," the Lieutenant General concluded.