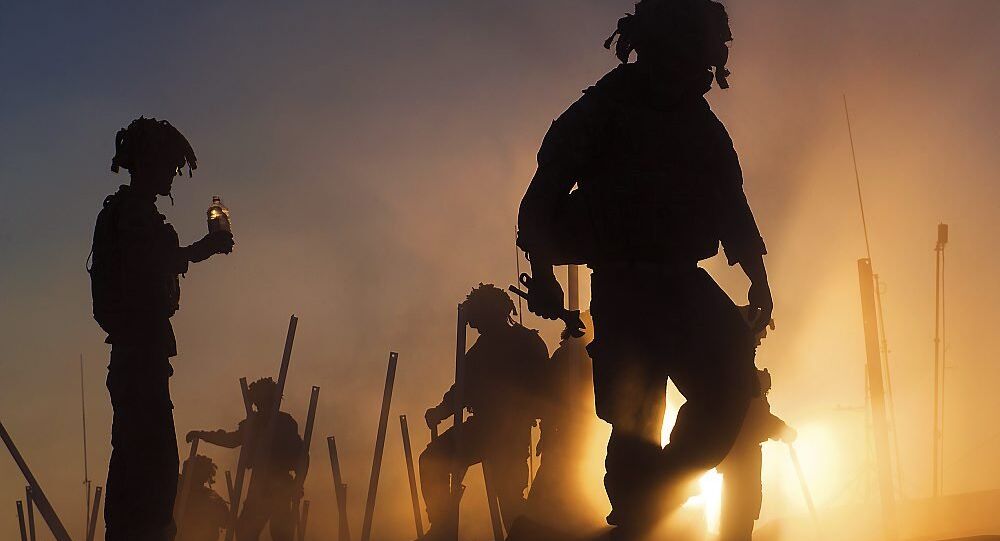 Fifteen years ago, the United States invaded Afghanistan under the pretext of finding and killing Osama Bin Laden, the former leader of Al Qaeda. Despite that the notorious terrorist was purportedly assassinated in Pakistan in 2011, US troops remain on the ground in Afghanistan, with no real withdrawal in sight.

Radio Sputnik's Brian Becker sat down with Peter Kuznick and Jeremy Kuzmarov, both history professors and authors, as well as Brian Terrell, peace activist co-coordinator of Voices for Creative Nonviolence, and Dr. Jacob Diliberto, a researcher at the University of Birmingham — and an Iraq and Afghanistan war veteran — for a discussion of the ongoing timeline of the unofficial war.

After the September 11, 2001 attacks, the CIA determined that Al Qaeda was responsible, a conclusion supported by UK intelligence. The leader of Al Qaeda at the time was Osama Bin Laden, who initially denied responsibility for the World Trade Center attacks, and was believed to be hiding in Afghanistan.

© REUTERS / Omar Sobhani
Kerry Urges Russia, China, Pakistan, India, Iran to Bring Peace to Afghanistan
The administration of US President George W. Bush contacted the Taliban government in Afghanistan with a request to hand over Bin Laden, but the Taliban stalled for time, offering to negotiate and asking for proof that Bin Laden was responsible for the tragedy. The Bush administration harshly rejected the proposal with the now-famous line: "we don't negotiate with terrorists." Thus began the US war in Afghanistan, with the Taliban portrayed as a regional political and military obstruction that had to be removed.

According to Dr. Jacob Diliberto, the successful initial stages of Operation Enduring Freedom were conducted with a very small amount of casualties. But with time, the Iraq War began "distracting" US military command, intelligence and logistical support, which led to a "deterioration" of the US efforts in Afghanistan.

According to Peter Kuznick, before the operation began, there were at least twenty high-level meetings between the Taliban and US representatives. The Taliban, Kuznick claims, proposed to hand over Bin Laden to the Organization of the Islamic Conference for trial, but the US refused.

"We never heard what they were trying to say, we had no common language," Kuznick quoted CIA station chief Milton Bearden saying. "[The Taliban] were happy to give up [bin Laden] but they needed the United States to work with them to give them some kind of face-saving way of doing so."

"In some ways we could have achieved our goal without an invasion at all," Kuznick says.

© AP Photo / Petar Petrov
Bulgarian Defense Minister Denies Plans to Withdraw Troops From Afghanistan
The Taliban government in Afghanistan was toppled in less than two months, but bin Laden turned out to be in Pakistan. However, Operation Enduring Freedom did not end in 2002, and 2000 US troops remain in the country to this day, and the Taliban is still very much a significant, and increasing, influence.

Kuznick underscored that the 15-year invasion, costing the US thousands of lives and over $800 billion dollars, has now led to the Taliban controlling more territory in the country than they did in 2001. According to him, the Taliban now control some 25 percent of Afghanistan districts.

If Bin Laden is really dead, and the world is still awaiting legitimate proof that he is, why is the US still in Afghanistan?

© AP Photo / Mazhar Ali Khan
Osama Bin Laden's Son Threatens Revenge Against US for Father's Murder
According to Kuznick, one reason is that the US administration does not want to be perceived as weak, similar to US President Richard Nixon's reluctance in the early 1970s to end the failing Vietnam War.

There are also two international pipelines that have been proposed in Afghanistan by the Union Oil Company of California (Unocal).

The United States is very good at toppling governments by means of overwhelming military force, he notes, but Washington is very bad at winning peace afterwards. While some $800 billion dollars has been spent on killing and invading, only about $2 billion has been spent on sustainable development programs in Afghanistan. The US consistently fails to offer realistic peace solutions to the countries they invade. Between one of the most corrupt governments in the world, and the abysmal level of poverty and illiteracy, the Afghanistan people, as a response to the US invaders, significantly support Taliban forces, and a military resolution to this conflict is impossible.

"The US can destroy things. The question is if the US can build things," Kuznick says.

EU, Kabul to Co-Host Brussels Conference on Afghanistan on Oct. 4-5

UK to Allocate Over $970Mln to Aid Projects in Afghanistan