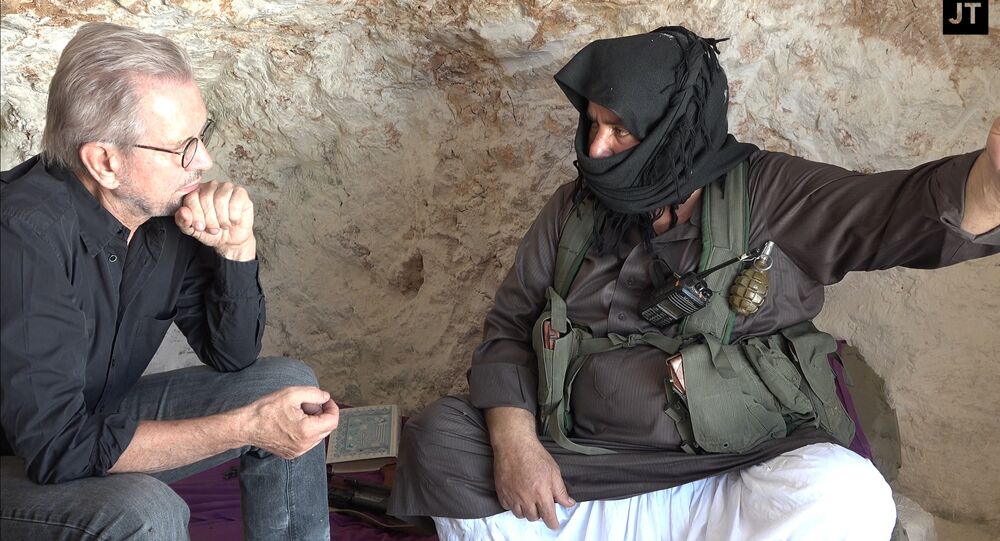 Last month, German journalist Jurgen Todenhofer, the first Western journalist to be given access to Daesh (ISIS) controlled territory, conducted an explosive interview with a Nusra Front commander in Syria. Soon afterward, he was accused of 'fabricating' the interview. Speaking to Sputnik Deutschland, Todenhofer responded to his critics.

Late last month, an unnamed militant believed to be a senior Nusra Front commander told Todenhoffer in an interview that his group had received advanced weapons, including BGM TOW anti-tank missiles, from the United States.

The sensational (and damning) interview soon spread around the world, and soon German media engaged in damage control began claiming that the interview was a fake. The detractors' main allegation focused on the territory where the interview was conducted; skeptics even suggested that the terrorist militant was actually a Syrian government plant.

Speaking to Sputnik Deutschland about the now famous interview, Todenhofer explained that he never had any illusions that his journalistic effort, and its shocking revelations about the extent of Western support for Islamist terrorists, would cause a strong reaction, "both from terrorists and from those who support mainstream Western policy in the Middle East."

© Sputnik / Ramil Sitdikov
Russia Placed S-300 Missiles in Syria After Learning of US Plans to Bomb Airbases
"I think that most of those who criticized me wanted to divert attention from two things, [first of all] from the issue of the supply of weapons to the Middle East, which is really indisputable. The US, France, Britain and Germany supply weapons to the Middle East. I believe that this is a very serious problem that needs to be discussed. And these weapons aren't there to shoot fireworks – they are there to conduct wars with."

Secondly, Todenhofer noted, "they want to distract from the fact that my interview – and not just this one but my earlier statements as well, destroy the mainstream worldview. This worldview suggests that in Syria, there is supposedly only one side fighting – namely the Syrian government and the Russians. If that were true, the war would have ended a long time ago. The truth is that there are two sides fighting a brutal war against one another."

Commenting on the details of his interview with the Nusra Front commander, the journalist recalled that at first, it wasn't even clear whether the jihadist would agree to filming.

"At first, there was a great deal of stress, because we were surrounded by gunmen in masks, and our driver feared that we had been trapped. But the conversation went smoothly. This commander is not a politician – not a Salafist, not a fanatic; he's just a mercenary, who managed to serve in the ranks of at least two rebel groups – a field commander with perhaps about 200 people under his command. And since he is not a politician, he spoke openly about the things he knows."

Incidentally, for the sceptics out there, the journalist emphasized the commander did not actually say that his group received weapons 'directly from the Americans.' "He said 'we directly received American weapons'. He did not say whether this was from a country or organization serving as an intermediary, but there is no doubt [that this is going on]. Everyone knows that the US and other countries supply weapons to the rebels; they say that they supply them to the 'moderate opposition', but we all know that some of these weapons are then passed to radical rebels and terrorists."

© Sputnik / Dmitriy Vinogradov
Definition of Insanity: US & Europe Preparing Sanctions Against Russia for Fighting Terrorism in Syria
As for the intense scrutiny the interview eventually received, regarding everything from the commander's slippers to his apparent lack of a beard to his golden ring (all ostensibly meant to prove that the man wasn't who he said he was), Todenhofer suggested that in reality, "there was no critical analysis. People simply pushed absurd allegations."

"For example, they say that Jebhat al-Nusra militants always go unshaven, while some of the ones I show have shaven faces." The reality is not so cartoonishly simple: "Some shave, some have a beard."

"Then, [critics] say that Nusra fighters do not wear gold rings, even if they come from another organization. This is simply nonsense. In Syria, thousands of people wear gold jewelry – it's perfectly normal. This is a very weak argument that comes from those who take absolutely no account of life in Syria, and is a view that could be held only by those who have never been to wartorn Syria."

"To all these people I can suggest only one thing: of course someone can do the interview better than I did, but let those who want to do it meet with al-Qaeda in East Aleppo in neutral territory and do it better. These are the same people who so fiercely criticized me when I spent ten days among the Daesh militants. Again – take the trip yourself, do it better, and then you can have a say."

Having been accused of being biased in favor of Russia and the Syrian government, Todenhofer emphasized that he remains convinced that there is "no such thing as a decent war," since civilians always end up being the main victims.

Still, the journalist added, one can only go so far in one's lack of objectivity. "In the western part of Aleppo, where government forces are based, several hundred people have been killed since the end of the truce – in 14 days. No one speaks about this. This means that the rebels have also been shooting, and this is a very simple proof that the two sides fight with equal ferocity."

But the mainstream media, according to Todenhofer, absolutely lacks any objectivity on the issue. "…The one-sided and simply dead-wrong coverage of the conflict itself is part of the scandal. If in this situation someone like myself goes to Syria, asks questions and get answers such as 'Yes, of course we get weapons from the Americans, in whatever way,' a lot of noise is generated around this; because the West does not want its image of the world – of 'good bombs' and 'bad bombs', to be disturbed."

© Sputnik / Michael Alaeddin
Moscow Says 3,500 Syrian Servicemen Killed in Ceasefire Violations Since February
Ultimately, the journalist said that he will continue to travel to Syria. Part of the proceeds from his latest book have gone to creating 80 prosthetics, which he plans to deliver to Syrian children.

"I am against this war, because I do not believe in a decent war. But I must say — and this is very important for me, that the support that the rebels receive from the West is a violation of international law. It is akin to leading a war of aggression – it's a war crime. No one has a right to supply weapons to some insurgents operating on the territory of a sovereign state. It is prohibited – it is a crime. And when the people I blame for supplying weapons not only to rebels, but also to terrorists – even indirectly – when these people shout – that too is perfectly normal. It's what I intended."

"I want to touch on a sore point; I want to start a debate on this issue. I want people to think," Todenhofer emphasized. "What if there were rebels in Germany, and some foreign state supported them with arms? We would say that such a thing is out of the question! In Syria the situation is more complicated, because the government has also committed crimes. Both sides commit crimes; decent wars do not happen, and so we need to put an end to this war, instead of saying 'the supply of arms from our side is good, while what the other side does is bad.' This whole war is shit!"