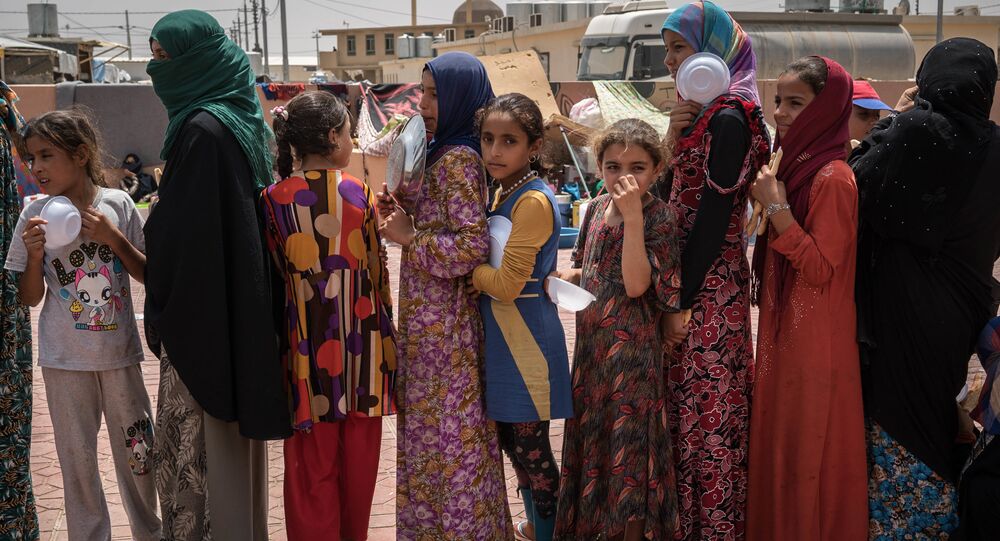 Turkey will struggle with the inevitable stream of refugees from the upcoming Mosul operation as the EU continues to drag its feet on fulfilling the refugee deal with Ankara, President of the Turkish Human Rights Association Ozturk Turkdogan told Sputnik Turkiye.

© AFP 2021 / Abd Doumany
'Only Russia, Turkey, Iran Can Stop the West' From Keeping 'Controlled Chaos' in Syria
Ankara is under pressure because it faces a stream of one million refugees after the upcoming operation to liberate Mosul, military operations in Iraq and Syria, and the EU's refusal to keep to its side of the migrant deal, President of the Turkish Human Rights Association Ozturk Turkdogan told Sputnik Turkiye.

Mosul has been under the control of Daesh terrorists since 2014, but Iraqi government-led forces with backing from a US-led coalition are planning an offensive to liberate the city.

Ankara has also sent Turkish troops to a camp at Bashiqa, northern Iraq, where they are also training Kurdish peshmerga and Arab fighters to confront Daesh in Mosul. This week the Turkish parliament extended the government's mandate to deploy troops on Iraqi and Syrian territory by one year, a decision which was protested by the Iraqi government.

"After the Mosul operation a problem with refugees will inevitably arise. Mosul is located quite far from Turkey, and in order to get to Turkey it is necessary to travel across the territory of Iraqi Kurdistan. However, there are about two million refugees there right now, so Iraqi Kurdistan is already experiencing great difficulties with those refugees. That's why there is reason to believe that irrespective of the large distance, the refugees will come to Turkey anyway," Turkdogan said.

Turkdogan said that while Ankara has largely kept to its side of the refugee deal agreed with the EU in March, it has not received the promised financial support or visa-free regime from the EU.

On Monday Turkish President Recep Tayyip Erdogan slammed the EU for failing to disburse the three billion euros it promised as part of the deal, and said that only 179 million euros had so far been provided to Turkey to pay for refugees living there.

"The flow of migrants to the EU from Turkey has decreased significantly. Turkey has announced that it has stopped the flow of refugees, and as far as we can see that's true. In exchange for stopping the flow of migrants Turkey is demanding a visa-free regime for Turkish citizens. The EU has said that Turkey has to fulfil a series of conditions, including changing legislation regarding terrorism. However, Turkey is not willing to make changes in this sphere," Turkdogan explained.

"That's why the future of this agreement is very questionable. At the moment, some aspects of this agreement are being carried out in reality, but I'm not sure that they can be carried out legally. In order to solve the problem of Syrian refugees it is necessary to regulation the Syrian crisis and create the conditions for a ceasefire and for Syrians to return to their homeland."

© AFP 2021 / BULENT KILIC
Operation Euphrates Shield: A Trap for Turkey or 'Endless War' for Syria?
Ankara is also carrying out its own military operation in Syria, called Euphrates Shield. Launched on August 24, it aims to support Free Syrian Army (FSA) fighters against Daesh in the border town of Jarabulus, and contain the expansion of Syrian Kurdish fighters in northern Syria following their key role in the liberation of Manbij from Daesh.

Turkdogan said that Turkey's presence in Iraq and Syria, as well as the likelihood of a further stream of refugees into Turkey, is a dangerous combination for Ankara.

"It is exactly the same situation in Iraq. Soon the Mosul operation will be carried out. As a result of this operation no less than one million people will be forced to migrate. Where will they go? Most likely to Turkey. In addition, as we know, some units of the Turkish armed forces are still present in Iraq. Taking into account all these factors, the situation is taking on a more explosive character," Turkdogan warned.

Daesh Will Be Out of Strongholds in Iraq, Syria Within One Year - Biden