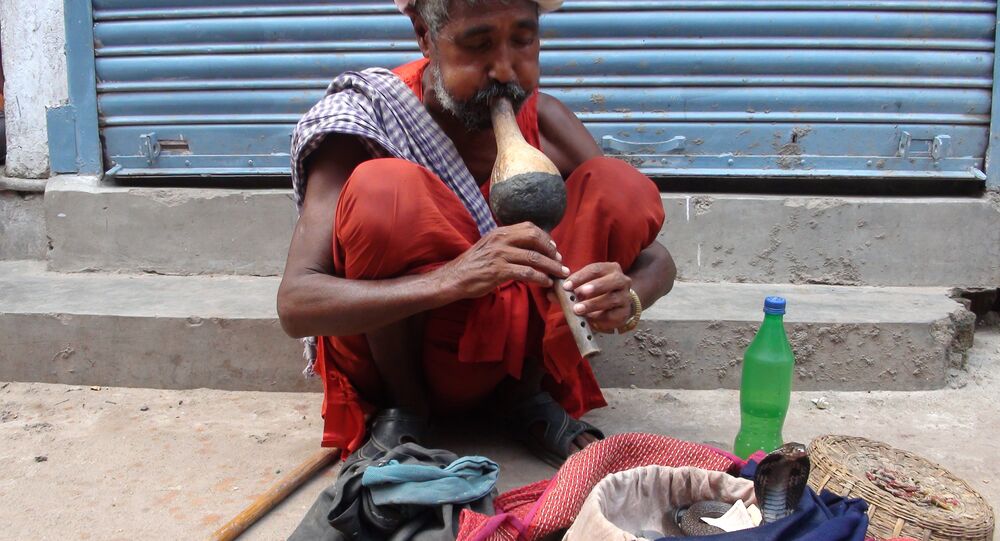 An age-old tradition that is commonly kept within families of "snake charmers" and once revered in Indian culture is struggling to survive. Local governments in India have been banning the trade across the country and leaving snake charmers with no other means of daily income.

Tourists in India have for long flocked to popular sights, where mystical Indian men (and women!) entice cobra snakes to dance to their flute sounds. But if the pressures on banning the art spreads nationwide, there will be no sight of a snake charmers anymore due to new local government regulations.

A local snake charmer from North India, referred to as "Sapera Baba" told Sputnik about the difficulties his community faced:

"If government was to provide us with an alternative option to make money, of course we would accept this, but to take away our tradition, which is taught to us all from a young age, is very sad. Society is changing too fast for us to survive and our old family traditions will simply die away as a result!" Sapera Baba told Sputnik.

International animal rights groups feel there are elements of cruelty in the art of snake charming in many countries, where it can be common for keepers of deadly snakes to remove the fangs and venom glands — or in extreme cases — even sewing their mouths shut to prevent biting.

Many snake charmers such as Sapera Baba in India vouch for their religious beliefs and their own superstitions being the reasons why they look after their snakes carefully, ensuring they are kept safely and not harmed in any way. He explained a pain-free procedure by which his family tradition was to remove the venom from the snake, but the fangs were kept in tact so as not to harm the snake in any way.

"Our family have always been devotees of Lord Shiva and so we treat our snakes like they are our Gods! For us to harm them in any way would be like we are harming God, and we will never do that!" he explained.

In the Hindu religion, the God Shiva is visually depicted as wearing a cobra snake around his neck, said to represent a lack of fear and his immortality. Old stories say when snakes were once endangered, the God Shiva gave them shelter and he became their protector. He wore them as ornaments as a sign of strength and also as a means of showing his control over the universe.

Many snake charmers in India live a wandering existence and are often devotees of Lord Shiva. They visit towns and villages on market days and during vibrant festivals.

Some snake charmers whose family traditions are struggling to survive feel that local governments could be looking at ways in which to license the trade, which would also be a way for them to make money from a trade they have been doing for many generations.

According to scientists, it is said that snakes are able to sense sound, however lack an outer ear which would enable to hear any music in the same way humans do.

In the case of the music played by the charmer, the snakes are assumed to follow the instrument with their vision carefully as a result of their normal reaction against a predator. This appears as if the snake is dancing, when in fact the snake is simply being vigilant.

Snake Goes Apoplectic While Riding on a Car Hood

Man Whips Out His Snake on Australian Train, Frightens Passengers