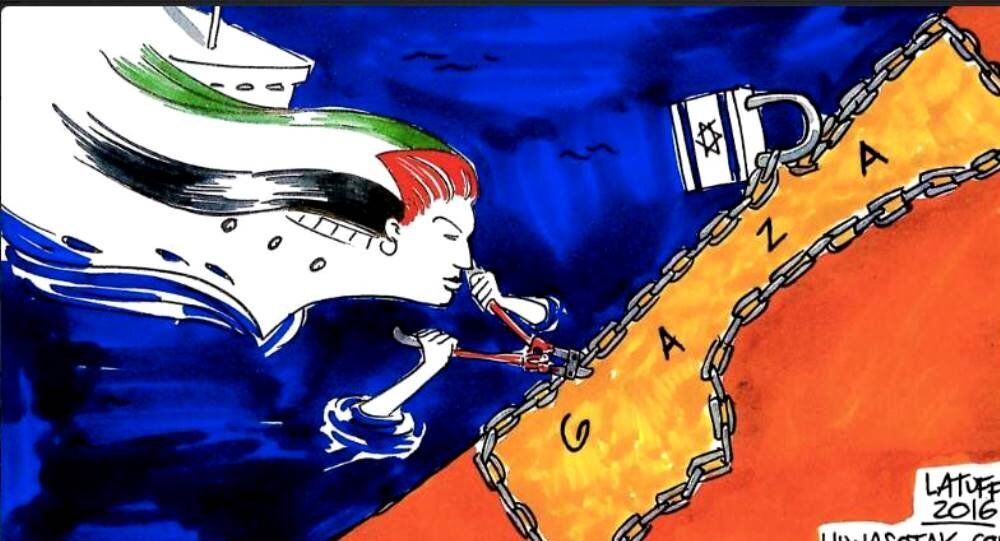 A boat carrying 13 women is nearing the shores of Gaza in the latest attempt to break the Israeli blockade of the Palestinian enclave.

The passengers of the Zaytouna-Oliva include several parliamentarians, an Olympic athlete, Nobel Laureate Mairead Maguire and former US Diplomat Ann Wright.

The Israeli newspaper Maariv has claimed that the Israeli Navy has received instructions to intercept the boat.

Fifty-five members of the European Parliament have written to EU Foreign Policy Chief Federica Mogherini, calling on the the EU act to ensure "safe passage of the Flotilla to Gaza."

If the EU allows #WomenFlotilla attack on Israel, it would be complicit in violation of International Law. @FedericaMog #LetFFlotillaSail

The boat is now less than 200 nautical miles west of Gaza and hopes to reach the besieged strip by tomorrow. It has been receiving well-wishing messages from around the world including from Pink Floyd icon Roger Waters.

The initiative was launched on 8 March 2016 on International Women's Day with the aim of raising awareness of the role women have played in the Palestinian struggle, as well as of the wider impact of Israeli occupation.

Another boat, the Amal-Hope II, had hoped to join the effort but was forced to remain in port in Messina after crew members were unavailable to sail.

Synne Sofie Reksten, a student from Norway and the youngest passenger on the Zaytouna-Oliva, said that the atmosphere on board remains positive.

"The mood on the boat is good at the moment," Synne Sofie Reksten told Sputnik.

"We are preparing for approaching land soon but we are also preparing emotionally and mentally for being stopped."

In 2010, six boats from the Gaza Freedom Flotilla attempting to break the blockade were raided by an Israeli military operation in which nine activists were killed.

Ms. Reksten said that they do not expect confrontation as they are part of a "completely non-violent action."

"The safety of us on board is up to how the Israeli forces treat us. We are a completely non-violent action. There is no sort of resistance or violence on this boat. We are peaceful, non-violent activists. If our security is threatened that is completely up to the Israelis," Ms. Reksten told Sputnik.

The 1.8 million people living in the Gaza Strip are subject to a land and sea blockade by Israel.

The siege was imposed in 2006 after Hamas won elections and subsequently took control of the Gaza Strip.

Ms. Reksten says that they hope by sailing to Gaza they will help to finally break the blockade.

"We want to send a message of peace and solidarity to the people of Gaza," she said.

"If we manage to get through, it will be a huge step towards an opening again of the marine route into Gaza which would be a huge for the civilians of Gaza."