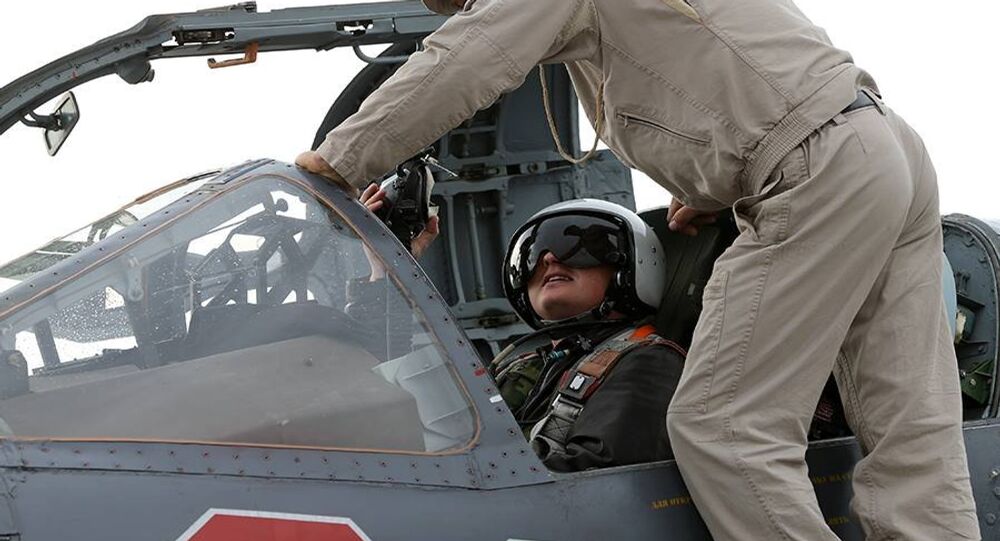 The US and its allies have been bombing Syria for five years, which only led to the advance of the terrorists deeper into the country; however Russia, which has limited means in comparison to the US, was able first to contain terrorism and then force it to retreat, foreign experts tell Sputnik one year after the launch of the Russian campaign.

© Photo : Russian Ministry of Defense
Russia's Success in Syria Comes as Unexpected Surprise to Its Western Partners
Friday marks the first anniversary of the beginning of Russia's aerial anti-terrorist campaign in Syria, launched at the behest of the Syrian government.

Sputnik interviewed a number of foreign military experts to learn their opinions of the Russian actions in the war-torn country. Here is what they said.

"We have to admit that Russia's participation in Syria for this year has been extremely effective," French retired brigadier-general and former deputy head of the special anti-terrorist unit at the Elysee palace, Jean-Louis Esquivié told Sputnik.

"The Americans and their allies have been bombing Daesh for five years. As a result, Daesh has had some success by making inroads into the country and capturing Palmyra, a city which has a particularly symbolic meaning to the West," he said.

"Here Russia comes into play, with limited means. Completely different means than those which the US could have used, let's say in Iraq. And with these limited means it was able first, to contain the terrorism and then force it to retreat," the retired brigadier-general explained.

The situation has changed, he said. Other people are now gripped with fear. Turkey has found itself involved.

However it was Russia who opened new opportunities and applied new strategies in Syria, Jean-Louis Esquivié said.

"The Russian operation in Syria has definitely played a positive role in the Syrian conflict," he told Sputnik.

"Russia's actions in the country are transparent and logical. Their main purpose is to eliminate terrorism. One of the major changes which happened due to Russia's interference into the conflict is that other countries, and the US and its allies in particular, have been forced to act more transparently and efficiently," the expert said.

José María Gil also noted that through diplomacy only, Russia forced Turkey to resort to a more restrained policy in Syria.

While commenting on the failures to cease the hostilities on the ground, the expert said that these issues should be addressed, first of all, to the western coalition which is "extremely unwilling to cooperate with Russia."

"Until all the players unite their efforts to fight against terrorism, the bloodshed will continue. However I hope that common sense will prevail," he said.

Rafael González Crespo, Spanish Colonel, writer and expert in Eastern Europe however told Sputnik that while Russia's aerial operation is a "step in the right direction, it is not enough to succeed in the fight against terrorism."

"There is a need for a ground operation in Syria. However there will be no stability in this Middle Eastern country until there is a consensus between all the parties to the conflict, which so far pursue absolutely different purposes," he said.

© Sputnik / Dmitriy Vinogradov
Russian Aerial Operation in Syria 'Wreaked Havoc on US' Greater Middle East' Plan
With regards to Moscow, he said, the purpose is clear: the destabilization of Syria threatens Russia's security as it can further spread to its southern regions.

"The Kremlin wants peace and stability in this Middle Eastern country," he said.

Rafael González Crespo however noted that not many people in the West realize it, first of all due to the efforts of the western media.

He also noted that it is highly questionable what the West is doing in Syria.

"Apparently, it is all about further shattering of the situation in the country to further weaken Russia. And the US is playing the major role here, while the EU is making a huge mistake by supporting Washington in this," he said.

Commenting on Russia's operation in Syria, Ren Yuanzhe, an expert at the Diplomatic Academy of China told Sputnik that Russian Aerospace Forces have been very efficient in Syria.

© Sputnik / Maksim Blinov
US Refusal to Work With Russia on Syria 'Gift' for Terrorists - Russian Foreign Ministry
"The participation of Russia and the US has considerably contributed to the settlement of the Syrian conflict. However the ongoing game between these two countries is deepening from day to day," he said.

He also noted that there is a communication failure between the two, citing as an example the recent accusations of Russia by the US and UN of the attack on the humanitarian convoy.

"We can only state that there is the lack of trust between Russia and the US," the expert said.

However commenting further on the Syrian future, Ren Yuanzhe said that it is inseparable from Russia's role.

"Russia will always play a major role in the settlement of the Syrian crisis. However only when all the parties act together, they will be able to change the situation in this country," he said.

The settlement of the Syrian crisis is a very complicated task and the alignment of interests of the two largest players, Russia and the US, is the key factor for further stabilization.

© REUTERS / Omar Sanadiki
Russia's Syria Operation Set Stage to Ending War, But US Would Have None of It
The expert also noted that there are evident improvements on the ground in Syria after the government forces have retaken the positions captured by the terrorist. It was possible only due to Russia's support, he said.

Meanwhile French retired brigadier-general Dominique Trinquand, who participated in the settlement of conflicts in Lebanon, the former Yugoslavia and Africa told Sputnik that it is premature to draw any results as the crisis in Syria has not ended yet.

"Among any evident results which have already been reached by now is the support of the government, the only one existing in Syria, which has managed to prevent the collapse of the country," he said.

However the problem is in getting to the negotiation table to define the future of Syria, Trinquand said.

At some point, he said, the fighting should be stopped to be able to start negotiating. However, he noted that Syria is not following this approach right now.