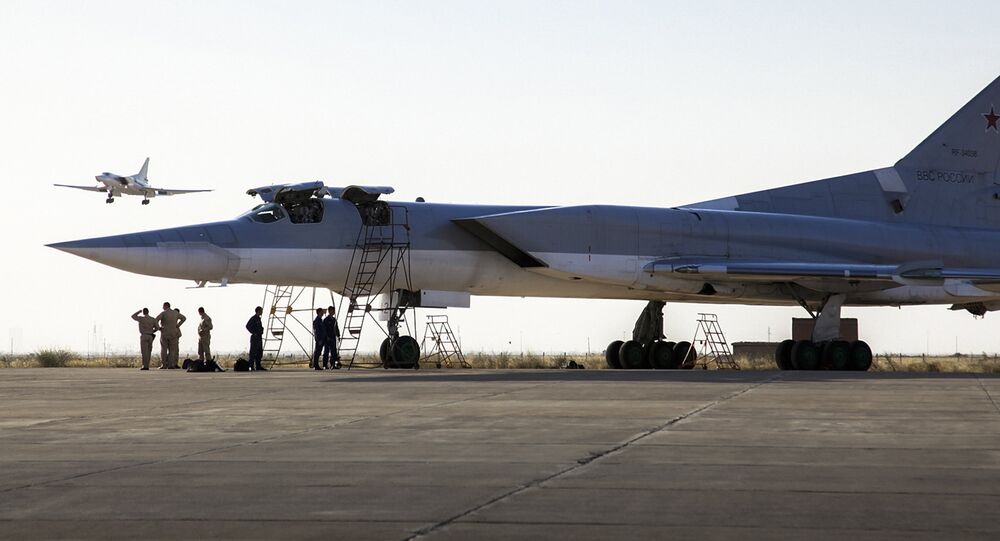 Ministry of defence of the Russian Federation
Russian Aerial Campaign Spurred US Anti-Terror Efforts in Syria, Iraq
Russia launched its aerial anti-terror operation in Syria a year ago, operating in cooperation with the Syrian army on the ground at the invitation of the Syrian government.

Although most Russian forces left the country on March 14, a small contingent remains at the Hmeimim Air Base in Syria, and Russian Aerospace Forces continue to carry out airstrike against terrorist groups operating in Syria.

On September 9, Russia and the US agreed on a ceasefire deal, however ten days later the Syrian army declared the ceasefire over because militant opposition groups, many of which have links to the terrorist group Jabhat Fateh al-Sham, consistently broke the truce.

On Sunday the UN Security Council held an extraordinary meeting, initiated by the United States, France and the UK, to address the rise in violence in Aleppo, Syria. Western diplomats criticized Russia and Iran during the meeting, claiming that support for Damascus from Moscow and Tehran is prolonging the war in Syria.

Hossein Sheikholeslam, former advisor at the Iranian Foreign Ministry and Iran's ambassador to Syria between 1998 and 2003, told Sputnik Persian that Iran remains in support of Russia's anti-terror operation, and continues to back the Syrian government in its fight against terrorism.

"It should be noted that Iran, Russia and the Syrian government advocated a peace settlement and the ceasefire, for an end to killing and bloodshed. I dare say that the initiative for the truce belongs to our alliance," Sheikholeslam said.

© Sputnik / Maksim Blinov
US Refusal to Work With Russia on Syria 'Gift' for Terrorists - Russian Foreign Ministry
"Sergey Lavrov has said that it isn't worth waiting for the Western coalition to decide on a peace deal, that we should be decisive and persuade the Syrian government to agree to a peace deal. However, unfortunately, the terrorists won't allow the establishment of a truce."

Sheikholeslam said that Russia's aerial anti-terror operation was a key turning point in the fight.

"We all know that the Syrian army's aerial equipment is old and wouldn't be able to carry out so many precise airstrikes. Russian aviation has provided support from the air, clearing the way for the government ground troops and the Syrian resistance."

"The Russian air operation was an undoubted success, particularly given that the Americans provided support to the terrorists, and advocated a no-fly zone in fear of losing their air corridor. It is clear that the US initiative to create a no-fly zone is aimed against the Russian Aerospace Forces and the Syrian Air Force, and not their coalition aircraft."

Sheikholeslam said that Iran's decision to allow Russia to use its air base during the course of carrying out anti-terror operations is testament to Tehran's resolute opposition to terrorism.

"Iran has approved and welcomed the participation of the Russian Aerospace Forces in the anti-terror operation in Syria since the beginning. We offered the Russian air force our technical assistance for carrying out flights, and welcomed the initiative to turn the Hmeimim base into a permanent Russian base."

"No NATO members have provided their military airports for the Russian Aerospace Forces to carry out the anti-terror operation, and Iran did (the Hamadan base). After all, we have one aim – the fight against terrorism. That's why we will show support and help Russia under any circumstances," Sheikholeslam said.