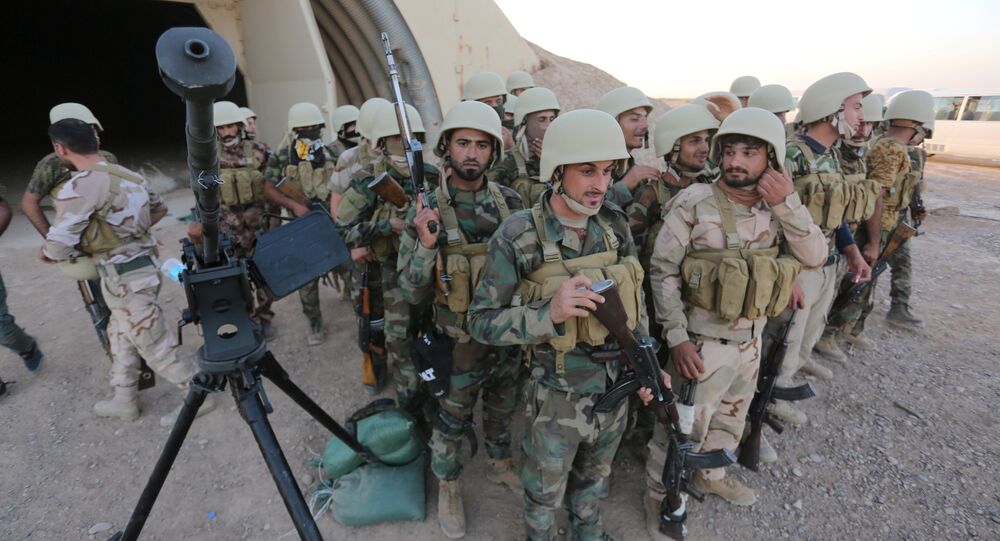 A large-scale military operation to liberate the Iraqi city of Mosul from Daesh terrorists is due to start in early October, Said Mamuzini, a representative of the Kurdistan Democratic Party in Mosul, told Sputnik.

© AP Photo / Alice Martins
Peshmerga to Play Role as ‘Front-Line Partners’ in Mosul Battle
In an interview with Sputnik, Said Mamuzini, who represents the Kurdistan Democratic Party in Mosul, said that the beginning of October should see a large-scale military operation by the Iraqi army and Kurdish Peshmerga forces to drive Daesh (ISIL/ISIS) out of the Iraqi city of Mosul.

The interview came after the US Department of Defense deployed 615 more US soldiers to support Iraq's military in retaking Mosul.

The soldiers in the new deployment will serve in roles the Defense Department described as advise, assist, logistics and intelligence.

"It was decided to start the operation in the first week of October. Apart from the Iraqi army, taking part in the operation will be Peshmerga forces which have already liberated several major Kurdish settlements from jihadists and are now approaching  Mosul's borders," Mamuzini said.

Despite the fact that the Peshmerga troops are authorized to enter the center of Mosul, they will not do so because of the delicate relationship between Arabs and Kurds, he explained.

He recalled that last month, the US and Peshmerga forces reached an agreement on the Mosul operation, a deal that stipulates supporting Peshmerga with money and weapons.

"The countries of the international coalition will provide air support for the operation, which we hope will wrap up in a few months," he said.

Mamuzini added that Iranian troops will not take part in the operation because of Washington's reluctance to see them fulfilling this mission.

He also mentioned the Turkmen forces currently trained by Turkish instructors and the Sinjar Resistance Units, a non-political Yazidi militia formed in Iraq in 2007 to protect the Yazidi community in Iraq and Iraqi Kurdistan.

"The liberation of Mosul may be followed by the sides being at odds over who should be at the helm of Mosul. It is necessary to take relevant measures beforehand in order to avoid a conflict on the issue, Mamuzini concluded.

Earlier, Turkish President Recep Tayyip Erdogan said that a joint campaign between the Iraqi army and Kurdish Peshmerga forces to liberate Mosul could begin on October 19.

© AP Photo / Yonhap/Jin Sung-chul
Daesh Owes Its Existence to US 'Philosophy of Dominance' Which Led to Iraq War
Mosul is Iraq's second-largest city and capital of the northwestern province of Nineveh. It has been occupied by Daesh terrorists since June 2014 and declared the Iraqi capital of the so-called Daesh caliphate.

With a government-estimated pre-invasion population of 1.5 million people, according to the Wall Street Journal, Mosul was the second most populous city in Iraq and the biggest city to fall to Daesh forces.

Once home to one of the country's most diverse urban populations, including one of the world's oldest Christian communities, Mosul fell to the terrorists in June 2014, forcing hundreds of thousands to flee for their lives or face murder, enslavement and rape.

No Foreign Troops Will Participate in Iraq's Mosul Liberation - Reports