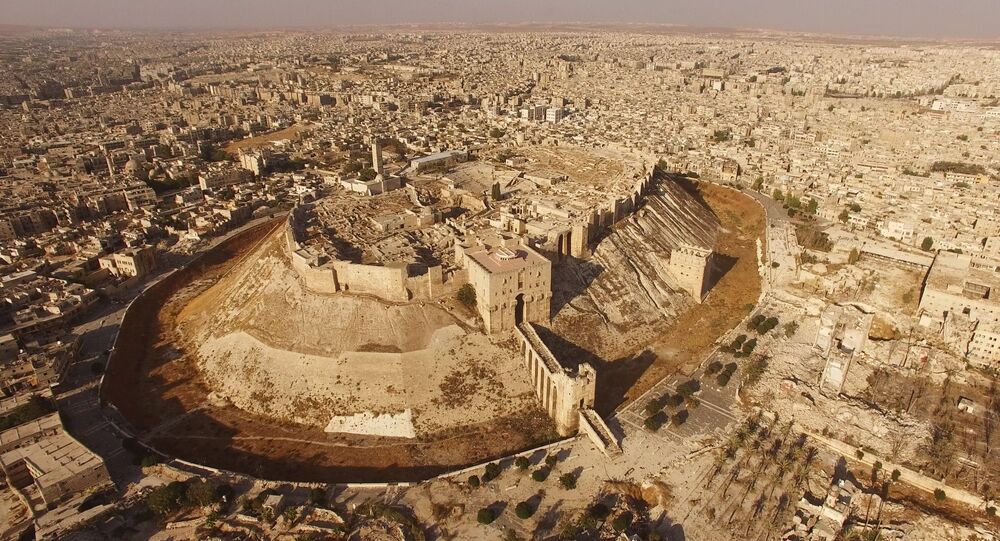 The Syrian army forces defending the ancient Aleppo Citadel from jihadist militants have heartfelt thanks to give Russia for its support, a correspondent with Russia's RIA Novosti news agency has found out.

The historic Aleppo Citadel, the centerpiece of a UNESCO-recognized world cultural heritage site, is located at the heart of old Aleppo atop a fifty-meter hill.

Today, just as it has for centuries, this ancient fortress serves as one of the main strategic points for the city's defenders. Here, the Syrian army has dug in against the jihadists.

© Sputnik / Dmitriy Vinogradov
One Year On: What Russia Achieved in Syria in 12 Months
Speaking to a correspondent from Russia's RIA Novosti, General Ali Zaid al-Saleh, the chairman of the Aleppo Security Commission, thanked Russia wholeheartedly for its year-long effort to assist the Syrian government militarily.

"The only country in the world which is helping us is Russia," the general said. "Only Russia fights across the world for the rights of the oppressed. We are grateful!"

Commenting on the militants' efforts to take the besieged Citadel, Lieutenant Dahir Kosvara, a veteran defender of the fortress, explained that "since 2012, the militants have made several attempts to blow up the walls, but they couldn't get close. We endured militant shelling using heavy machine guns and artillery."

"The Citadel is a symbol of Aleppo's resistance, and that of Syria as a whole," Kosvara emphasized.

© Sputnik / Michael Alaeddin
The Citadel, a formidable fortress built on the high hill in the heart of Aleppo, joined the UNESCO World Heritage site list in 1986.

In 2012, 25 fighters from the city's garrison were surrounded in the Citadel. Cut off and left without supplies, the servicemen managed to hold out for several months before the fortress fell. In the spring of 2013, the Syrian Army conducted a special operation to gain back control of the castle.

As in ancient times, the fortress is looked upon as the key to the city – from its tower, defenders can observe and fire on enemies from almost any part of the city. Built and rebuilt repeatedly between the third millennium BC and the 12th century AD, the fortress has been stormed by Roman legionnaires, the Mongols and the Turks. Now, jihadist terrorists can be added to the list, and perhaps it is fitting, given their retrograde ideology.

© Sputnik / Michael Alaeddin
Pinpoint Accuracy of Russian Jets 'Gifts the Syrians With Firm Hope for Victory'
The Citadel is under siege to this day. It is only possible to enter using secret underground corridors. Its ancient walls remain inaccessible. Surrounding the Citadel is a wide moat that protects against would-be suicide bombers and cars stuffed with explosives. The entire perimeter of the fortress is surrounded by observation points. The slightest movement by the terrorists is monitored around the clock. Every window –every embrasure of the Citadel has been turned into a fortified firing position.

"The last attempt to capture the fortress took place recently," Mahmoud Ganesh, the commandant of the fortress, told RIA Novosti. "We found out that militants had dug a 200 meter tunnel; this took them five months. We set up an ambush and met them with fire. Two militants were killed on the spot; the rest fled. We blew up the tunnel."

© Sputnik / Michael Alaeddin
Aerial view of the Citadel, located in the old city of Aleppo (File)

Apart from its strategic importance in the Syrian war, the Citadel carries a global historical significance. Inside its walls are hundreds upon hundreds of ancient relics and monuments. According to archeologists, the first structure discovered here is over ten thousand years old. Each new building has layered over the old, with new walls built over top of old ones; the current Citadel appeared in the tenth century. In the XIII century the fortress was among the richest cities in the Middle East.  Inside were palaces, baths, mosques, tombs, an arsenal and granaries.

In its history, the fortress was captured by Romans, the Crusaders, Muslim forces, Alexander the Great and Tamerlane. An earthquake in the XIX century destroyed nearly all its buildings. Only the Roman amphitheater, the throne room, several mosques and churches remained; for over four years now, terrorists have attempted to capture and destroy the latter. But the Syrian military forces defending the fortress have vowed to prevent that from happening.

'Get Out!': Free Syrian Army Burns US Flags to Protest American Soldiers