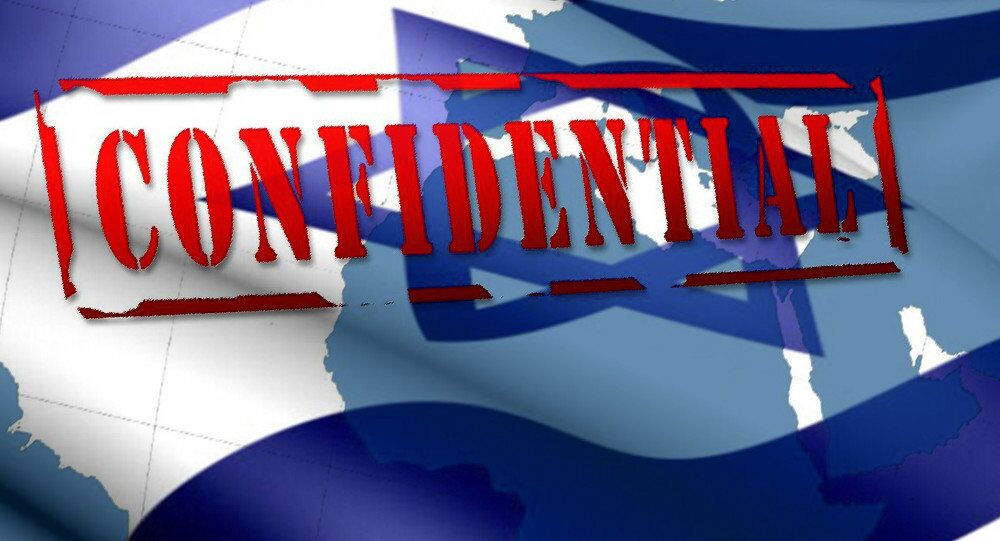 Another batch of MI5 files just released by the National Archives in London, reveals more details regarding the origins of present day troubles in the Middle East, as well as the machinations of western allies trying to upstage one another.

In the run-up to the proclamation of the State of Israel in 1948 the British Mandate administration in Palestine was caught between Jewish groups competing for preeminence in their fight against the British, as well as between Britain's wartime allies who were pursuing their own agendas in the Middle East.

Just as with present day Syria, London was trying to identify and do deals with "moderate" opposition to the British authorities. However, it transpires from numerous deciphered exchanges between the MI5 Palestine station and London HQ that the line between the "moderates" and "Terrorists" [with a capital T as seen in most dispatches] was so thin, that it was almost impossible to distinguish between them.

The British placed their bets on the Jewish Agency, headed by Ben Gurion, and indeed they had what appeared to be a mutually beneficial relationship, especially with the Agency's security liaison, officer Teddy Kollek (who went on to become the Mayor of Jerusalem in 1960s).

However, MI5 officers strongly suspected that both Kollek and the Agency were playing a double game, trying to use the British security services and the Army to crush its rivals within the Jewish "resistance" and to further their own cause. Not unlike various Syrian armed groups these days…

The "dirty" work was done by the two notorious terror groups — the Irgun Zvai Leumi (IZL) and the Stern Group (or Gang — depending on the mood of a particular MI5 officer writing another memo about yet another terrorist outrage).

The MI5 files contain numerous reports about blown up bridges, oil depots, telegraph poles, robbed banks, army trucks and killed soldiers and policemen. A security summary for January 1942, suggested that "the [Stern] Gang has been responsible for five murders in one week, causing considerable panic in Tel Aviv."

The assassination of Lord Moyne, the top British official in the Middle East, in November 1944, and the blowing up of British HQ at King David Hotel in Jerusalem in July 1946, with a loss of 91 lives, turned British panic into desperation and mass reprisals that made things even worse.

© AFP 2021 / Intercontinental
A picture taken 22 July 1946 shows the King David Hotel in Jerusalem, which housed the British Headquarters, damaged after a bombing attack against the British government by members of Irgun, a Zionist terrorist group headed by Menachem Begin.

The Daily Telegraph reported from Palestine:

"Palestine lives under martial law. Ordinary democratic rights are totally abrogated… There are thousands of persons arrested without trial… An outcry in the local Press against 'Jews being knocked about or beaten at Talbieh Military Detention Barracks,' and being most roughly handled when picked up on the streets… troops, shouting, 'King David,' are alleged to have beaten prisoners and then forced them to shout in chorus: 'the English are good.' "

Catching the perpetrators was an uphill struggle.

The Jewish Agency was trying hard to place the blame for those outrages not on the Stern Gang but on its political rivals, an MI5 security summary said. The armed militia closest to the Agency was Hagana, which later formed the nucleus of the Israeli Army, and the Brits were led to believe by the Jewish Agency that it was following a moderate line and challenged the extremists of the Stern Group and IZL.

However, an MI5 source was "of the opinion that they [Stern Group] are in complete agreement with Hagana policy and fully under the control of that body."

Hagana, Stern, and IZL had a love-hate relationship throughout the British Mandate, at times fighting each other, declaring a truce, joining forces, then falling out again.

"The Irgun Zvai Leumi and the Stern Group… have decided to place themselves at the disposal of Hagana," an MI5 dispatch said.

Other dispatches spoke of Hagana kidnapping and torturing members of rival groups, sometimes handing them over to the British, "blackmailing us to release their own people." MI5 officers complained that instead of apprehending real terrorists the Agency was pursuing its political opponents, while playing the "good cop."

"In order to dissociate itself from future acts of terrorism, the [Jewish] Agency is reported to have planned the setting up of a cover organization to be known as 'The Yishuv Fighting for Jewish life and Freedom in Eretz Israel,' " an MI5 telegram said.

"This new group, in which HAGANA, Irgun and Stern Group leaders will be included, will be used for… the announcement of the establishment of a rebel Jewish Government."

No wonder, British security officers expressed their distrust of the entire Jewish population in Palestine.

In Aug 1944, Lt. Colonel Hunloke, a Defense Security Officer in Palestine, wrote to his superiors in Jerusalem and London, underlining that he was expressing his personal opinion:

"I consider it entirely wrong to lay the blame on any single section of the Jewish Community. By their teaching of the youth, by the speeches of their so-called leading politicians, they are all equally culpable."

Referring to a speech by Ben Gurion, Colonel Hunloke wrote:

"In my opinion, such utterances at this time is as near to high treason as may be obtained and yet no action is taken."

After an attempted assassination of the British High Commissioner, Hunloke lamented:

"We are all apt to suffer from a defeatist attitude that we cannot penetrate these Jewish illegal organizations."

No such problem existed for the opposite side.

"The murder of Lord Moyne has focused attention upon Zionist activities in Egypt and has shown up how deeply the Army and RAF are penetrated by Zionist units and personnel."

The problem was so grave that HM Ambassador to Egypt, Lord Killearn, wrote to General Sir Robert Paget, Commander-in-Chief of the Middle East Forces:  "…about members of [Jewish] Palestinian units who are stated to be meddling in political affairs which have, presumably, no relation to their military duties… for the sake of security, as well as for political reasons, Jewish personnel should be removed from Egypt in the largest possible numbers and in the shortest possible time."

The British were concerned that the Jewish Brigade established and trained by them to fight the Nazis in Africa and Italy was an incubator for terrorists. The MI5 files contain a "top secret" request for "special attention security check of all Jews traveling to the UK," because of the security threat.

In pamphlets and radio broadcasts circulated by the underground, the British rule was branded in words not dissimilar from the ones used these days by the Syrian opposition to label the Assad government. The British were called mass murderers with the blood of hundreds of thousands of innocent victims on their hands. The British regime in Palestine was criminal, the pamphlets said, and had to be destroyed by all means.

Quite a few of these means were provided by the British wartime allies, the French.

Reporting on his visit to the Middle East in February 1945 A.J. Kellar wrote:

"The Stern Group… would seem to be receiving support from the French whose activities against law and order in Palestine have increasingly required our attention. We already know from 'Top Secret' sources that French officials in the Levant have been clandestinely selling arms to the Hagana and we have received recent reports for their intention to stir up strife within Palestine not only in retaliation for the part we played last year in supporting Lebanese and Syrian demands for independence but also, by embarrassing our position in the Mandate, to distract our attention from French activities in Syria and the Lebanon."

Shortly before the deadliest attack on the British at the King David Hotel in Jerusalem, an MI5 agent "CIRCUS" reported: "200,000+ (35?) pound sterling paid by Jews to French for arms. Such a large sum only likely to be available to Hagana."

In other words, as James Barr writes in his book titled "A Line in the Sand," while the British were fighting and dying to liberate France, their supposed allies the French were secretly backing Jewish efforts to kill British soldiers and officials in Palestine:

"And the British Government had known for some time that the Irgun and the Stern Gang were planning to use Paris as a base for assassinations of key British politicians including Churchill."

Of course, from the French point of view, theirs was just payback for the British helping Lebanon and Syria to break free from France. MI5 dispatches spoke of "distrust for British political agents in the Levant States, common to all French officers serving there."

Not much trust appeared to be had between the British and the Americans either.

MI5 officers were bombarding the FBI with requests for information about Jewish militants being trained in terrorist warfare in New York before being sent to Palestine as illegal immigrants. One MI5 cable spoke of "an underground army of some 200,000 Jews" in Palestine, which was being armed "with the help of American Middle East representatives."

Another report, from agent CIRCUS, read:

"Kaplan cabled from America that he can raise 4,5 million dollars for the proposed Jewish Army in Palestine. The commission set up for the organization of this army already at work."

FBI's replies were long-winded but gave no indication on whether anything was being done to disrupt the recruitment and training of terrorists or to stop them from illegally traveling to Palestine.

"In the event any pertinent data are developed in this regard, they will be furnished to you," an FBI cable promised.

The MI5 files do not contain any further replies to this effect from the US ally.