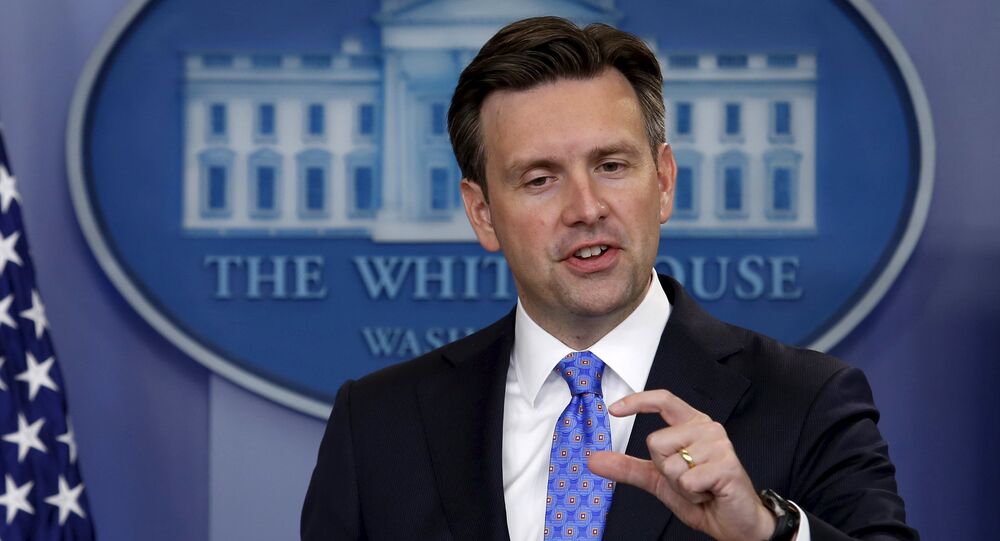 © AFP 2021 / FABRICE COFFRINI
UN Needs Lasting Cessation of Hostilities to Resume Geneva Talks on Syria
WASHINGTON (Sputnik) — The press secretary noted that the situation in Syria continues to worsen despite efforts by the international community to put an end to the conflict.

"It [violence] also poses a risk to Russia back home because we know that this kind of violence and chaos…only fuels extremism in Syria and around the world," Earnest said in a briefing.

The Russian authorities, Earnest claimed, will have to invest additional resources in their efforts in Syria as the country draws itself deeper into the sectarian conflict.

"Russia will have to account for their actions in the context of the consequences they are likely to provoke," Earnest stated.

© AFP 2021 / LOUAI BESHARA
World Food Program Delivers Humanitarian Aid to 4 Besieged Towns in Syria
Syria has been mired in civil war since 2011, with government forces loyal to President Bashar Assad fighting a number of opposition factions and extremist groups, such as Daesh and Jabhat Fatah al Sham, previously known as al-Nusra Front. Both are designated as terrorist organizations and banned in Russia as well as many other countries.

Russia launched airstrikes against terrorist positions in Syria on September 30, 2015 at the request of President Assad. Russian military aviation had conducted more than 9,000 sorties until March 2016, helping Damascus turn the tide of war and launch offensives in key regions of the country.

In March, Russian President Vladimir Putin made a decision to withdraw much of the Russian forces from Syria after determining they successfully fulfilled their tasks there.