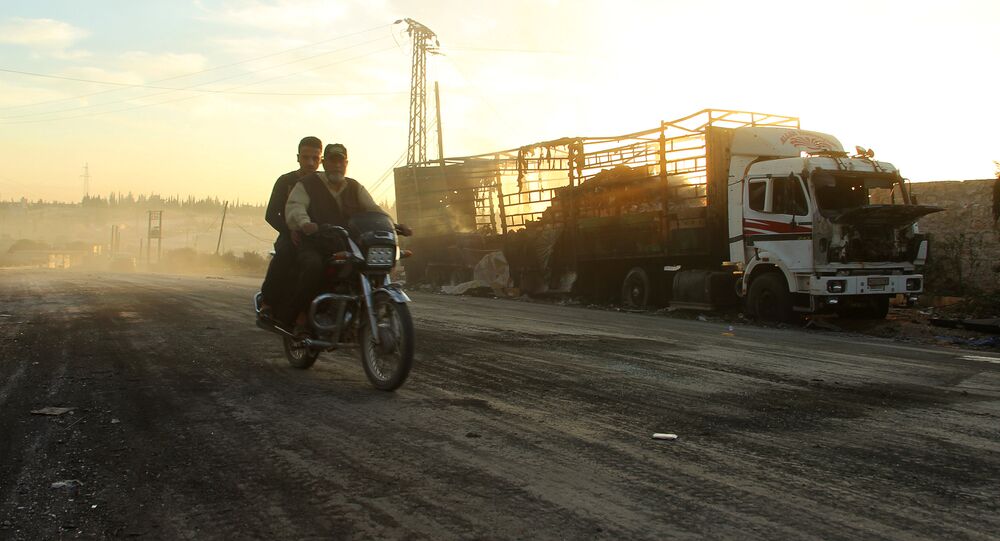 Commenting on Monday's attack on the humanitarian convoy in Syria, both Russian experts and representatives of the Syrian Arab Red Crescent, who escorted the convoy, agree that it was a provocation. Russian experts suggest it was aimed at distracting attention from an earlier attack on Syrian army positions by the US-led coalition.

© AFP 2021 / TIMOTHY A. CLARY
Kerry's 'Parallel Universe' in Syria Revealed in 'Scant, Factless Show'
"There is no evidence that it was an airstrike of either Russian or Syrian aviation on the humanitarian convoy in Syria," Wael al Malas, the representative of the Syrian branch of the Red Crescent, which escorted the convoy, told Russia's Izvestiya newspaper.

"On the contrary, everything points to it being the militants of the terrorist organizations who exploded and set on fire the trucks of the convoy," he added.

It should be also noted, al Malas added, that the attack coincided with the militant assault on the positions of the Syrian army near Aleppo.

"Therefore it was more likely a provocation aimed at capturing the media's attention in order to accuse Damascus and Moscow of the attack," he stated.

This view is echoed by Yuri Zinin, Senior Research Fellow at the Center for Partnership of Civilizations of Moscow State Institute of International Relations (MGIMO).

"The US is trying to deflect the criticism it was subjected to after the assault on the positions of the Syrian army at Deir ez-Zor [on September 16] by the US-led coalition," he told the newspaper.

"It cannot be ruled out that there was an order to distract somehow the attention from that particular incident and move the spotlight on to Russia," he suggested.

© Sputnik / Evgeni Odinokov
Russia’s Zakharova Viciously Mocks America’s UN Ambassador for Remarks on Syria
"The attack [on the convoy] is a provocation aimed to disrupt the peaceful settlement of the Syrian conflict and any possible negotiations on the matter," the political analyst added.

He further explained that in case there are any agreements on the settlement of the conflict, many forces, and first of all the oppositions, would be left outside the political process and will lose financial support.

The expert said, there are thus two possibilities behind this attack: either the oppositional forces decided on their own to escalate the situation and attack the convoy, or they might have received an order from the US to do so.

Speaking on Wednesday at the UN Security Council High-Level Briefing on the Situation in the Middle East and North Africa, Russia's Foreign Minister Sergei Lavrov also pointed out at the timing of an attack on the humanitarian convoy, which coincided with a fierce attack of al-Nusra Front and allied detachments on the Syrian government forces in the same area known as the Ramus road.

"I am not trying to make any accusations," Sergei Lavrov said.

"However, I am convinced that such coincidences call for serious analysis and investigation. We insist on the most thorough and impartial probe into the attack against the humanitarian convoy."

US Air Force
US-led Coalition 'Predator' Attack Drone Was Spotted Around at the Time of UN Convoy Attack
"There are many indications that it could have been a rocket or artillery attack. Initially that was how it was reported. Then they started mentioning helicopters and then aircraft. Therefore it is probably necessary to refrain from emotional responses and to not immediately grab the microphone and make comments, but conduct a thorough and professional investigation."

It is also noteworthy that the distance between the site of the incident and the epicenter of the battle in western Aleppo, where Jabhat al-Nusra is active, does not exceed five to seven kilometers," Russia's top diplomat said.

"Russia has provided all the data in its possession related to the attack against this convoy, including real-time video footage. Despite our calls regarding the need to influence the armed opposition and corresponding groups, as recorded in UN Security Council decisions, so far, very little result has been achieved in this sphere," he stated.

Meanwhile the UN Office for the Coordination of Humanitarian Affairs (OCHA) for the Middle East and North Africa (ROMENA) told Izvestia that it has launched a full-scale investigation into the attack.

"The UN is conducting a large-scale investigation into the incident near Aleppo in order to find out what really happened and who is responsible for the attack (on the convoy)," Regional Public Information Officer Iyad H. Nasr told the newspaper.

© Flickr / U.S. Department of Defense
US-Led Coalition Airstrikes on Syrian Army Position are Nothing but Flagrant Violation of Syrian Ceasefire - Lavrov
"At the moment, we can't say who was behind the attack. However we are in constant contact with the Syrian authorities, opposition and the [US-led] coalition, he said.

Nasr also noted that the UN so far does not have exact data on the number of victims but confirmed that both civilians and members of the humanitarian mission were among those killed in the attack.

"On the whole I would like to underline the threat that the attack poses to the continuation of humanitarian aid deliveries to the Syrian people. We have currently halted further humanitarian convoys but the work of the previous humanitarian missions goes on, as it is not acceptable that the Syrians are held indirectly responsible for this particular incident," he finally stated.