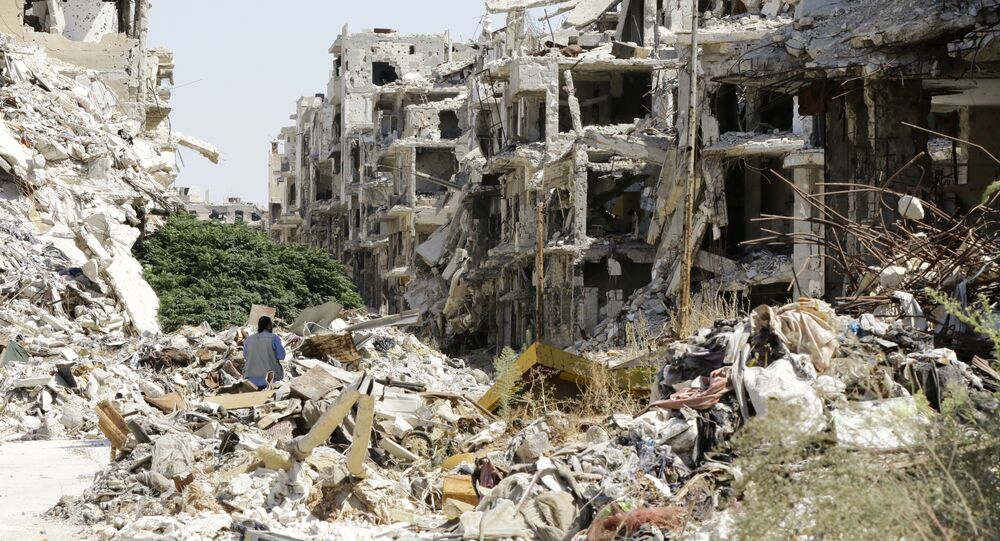 Recent attacks on the Syrian army have led to the end of a ceasefire with rebel groups, which was never accepted by war hawks in the US government and their allies in the region, Kevork Almassian, an analyst specializing in Middle East affairs told Radio Sputnik.

On September 19 a UN humanitarian aid convoy in south-western Aleppo came under fire. The attack left 20 civilians and a senior official of the Syrian Arab Red Crescent dead, and destroyed 18 out of 31 aid trucks which were intended to deliver food, winter clothes and medical supplies to 78 thousand people in besieged areas.

The incident took place in an area controlled by armed rebel groups, who have in the past repeatedly obstructed the passage of aid convoys.

It happened two days after the US-led anti-Daesh coalition bombed Syrian army positions in the eastern city of Deir ez-Zor, killing 62 Syrian soldiers are injuring over 100, an incident which Washington said was a mistake.

Responding to accusations from the US and the UK-based Syrian Observatory of Human Rights that Russian or Syrian airplanes were responsible for the attack on the convoy, the Russian Ministry of Foreign Affairs said that the claims are a baseless attempt by the US to deflect attention from its earlier bombing of the Syrian army.

"We reject with indignation these attempts by some foreign curators of rebel groups and terrorists in Syria to blame Russian and Syrian air forces for this incident," the Russian Ministry of Foreign Affairs stated.

The delivery of aid to rebel-held areas was a key element of the ceasefire deal between the Syrian government and rebel groups which was brokered by the US and Russia and in force since September 12.

However, in the afternoon of September 19 the Syrian army declared the end of the ceasefire, because of numerous violations by the rebels.

© Sputnik / Mikhail Alayeddin
Syria Ceasefire 'Still Possible' in Spite of Recent Setbacks
Kevork Almassian, an analyst specializing in Middle East affairs told Radio Sputnik that the ceasefire agreement with the Syrian government has faced opposition from inside the US administration since the beginning, which has enabled attacks on Syrian forces by rebel groups, and the latest attack by the US-led coalition.

"If we check the date of the (beginning of the) ceasefire, there were more than 300 violations of the ceasefire by the opposition forces. That gives us the impression that the US is either unwilling to impose a ceasefire, or is unable to impose it on its proxies in Syria."

"These people, including al-Qaeda, al-Nusra Front, the Free Syrian Army, Ahrar al-Sham, Islamic Army, all these armed groups are funding and supported directly by the closest allies of the US. So either the US is not able to practice pressure on Saudi Arabia, Qatar and Turkey, or the US is unwilling to practice it."

Almassian said that recent attacks in Syria demonstrate a lack of political will in Washington for a ceasefire, and splits in the US administration on the matter.

"After the latest attack in Deir-Ez-Zor and also the recent developments in Aleppo, by attacking the humanitarian convoy, it becomes clear that there are parties who are able to damage this ceasefire, and these people are within the American administration itself. These are people who support Hillary Clinton and they are not interested in a peaceful solution now," Almassian said.

While Us Secretary of State John Kerry wants to end Barack Obama's presidency with a peace deal in Syria, the White House is being thwarted by the US defense department and its allies in the region, who "want to prolong this war in Syria until Hillary Clinton comes to power."

© Sputnik / Dmitriy Vinogradov
Sergei Lavrov Explains Why Syrian Air Forces Could Not Have Attacked UN Aid Convoy Near Aleppo
"The second is that the US should practice pressure on its allies in the region, namely Qatar, Saudi Arabia and Turkey, to stop funding and supporting the terrorists, and mainly to force the so-called moderate opposition forces to distance themselves from al-Nusra Front," Almassian said.

The al-Nusra Front (Jabhat al-Nusra) pledged allegiance to al-Qaeda in 2013, but in late July claimed to have severed ties with the organization, and rebranded itself as Jabhat Fateh al-Sham, meaning "Front for the Conquest of Syria."

"We all know that Qatar is not interested in this, now they are trying to polish and re-brand al-Nusra Front, and presenting it as a moderate opposition. However, Russia and Syria will not accept this because they know that re-branding or changing the flag will not change the fact that these people are al-Qaeda jihadists and bombing them is a duty to save Syria and save the region from further terrorism."