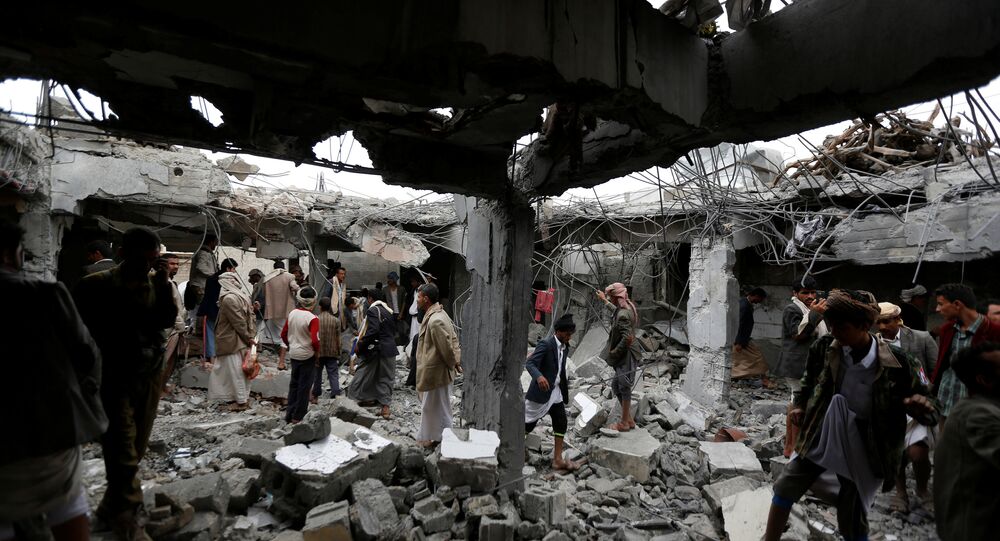 There are fresh calls for an independent investigation to be carried out into alleged Saudi humanitarian law breaches in Yemen, with the Dutch government calling for an inquiry during a meeting with the UN human rights council.

Speaking to the Geneva-based council, the Netherlands' permanent resident Roderick van Schreven, said the Dutch government wanted to "reiterate our grave concern about the ongoing and deepening crisis in Yemen."

Saudi (with US silence) squashed a Dutch attempted inquiry into the war in Yemen — instead, Saudi will conduct its own investigation.

© REUTERS / Narendra Shresta
May Backs UK-Saudi 'Toxic Relationship' Amid Illegal Yemen Attacks Claims
​The Dutch intervention has strengthened calls for an independent investigation to be carried out, while it also places pressure on many of Saudi Arabia's western allies — principally the US and Britain — to adhere to calls for a third-party inquiry, amid allegations Riyadh is guilty of international and humanitarian law violations in Yemen.

Despite evidence from aid workers and human rights organizations accusing the Saudi-led military intervention of targeting civilian areas in Yemen as part of its airstrike campaign, Riyadh has rejected calls for an independent investigation into the claims to be conducted, while allies such as Britain have backed Saudi-led inquiries into the claims.

​However critics have slammed the Saudi-led investigations as being one-sided and unable to come to an objective outcome.

"The national investigation effort has not been able to provide the impartial and wide-ranging inquiry that is required by serious allegations of violations and abuse," UN high commissioner for human rights, Zeid Ra'ad Al Hussein, said in his address to the council last week.

While it is unknown whether the Dutch intervention will lead to formal calls for an independent inquiry, pressure is building within the international community to press Saudi Arabia about its actions in Yemen.

Last month, 11 people were killed and 19 others injured in an airstrike attack on the Abs Rural hospital in Yemen, the fourth such attack on a Medecins Sans Frontieres facility in the past 10 months.

Under President Obama's watch we have sold or committed to sell over 100 billion dollars worth of arms sales to Saudi Arabia. Time to stop!

​Human rights campaigners Amnesty International claimed a US-made bomb was used in the attack, reportedly carried out by Saudi forces.

UN estimates suggest that 10,000 people have been killed in the 18-month-long Yemen conflict, with around 3,800 of those being civilians, while many more have displaced from their homes and left in dire need of humanitarian aid.

UK Parliament Committee is clear: arms sales to #Saudi-coalition must stop until abuses in #Yemen are investigatedhttps://t.co/RJjBJtkKmX

​Along with the calls for an independent investigation, pressure is building on Britain and the US to halt the sale of arms to Saudi Arabia, with critics claiming that Washington and London could be complicit in Riyadh's alleged crimes.

"The Abs Rural Hospital attack is far from the first Saudi coalition bombardment of a Yemeni hospital — it's now long overdue for UK ministers to finally do the right thing and suspend weapons sales to Saudi Arabia before this carnage gets even worse," Amnesty International UK's Arms Control Director Oliver Sprague said.

​"Ministers are always claiming the UK has a 'rigorous' system for assessing the risk of UK arms sales leading to atrocities like this one, so when are they going to prove that by stopping arms to Saudi Arabia?

"How many more hospitals have to be bombed before UK ministers finally act?"

Escalation of Conflict in Yemen Impedes Access to Medical Care