A delegation of negotiators representing the Shia Houthi movement, also called Ansar Allah, has refused to return to Yemen from Oman in a UN plane after the international organization absolved itself of the responsibility for their flight's safety, a source in the delegation told Sputnik on Sunday.

SANAA (Sputnik) — The delegation of Houthi rebels and their allies loyal to former Yemeni President Ali Abdullah Saleh has been stuck in Oman, where it arrived following  the failed peace talks with the Yemeni government hosted by Kuwait, since August, when the Saudi-led coalition, which carries out airstrikes against the Houthis at the request of the Yemeni government, blocked the aircraft with the Houthi delegation trying to return to Yemen.

"The flight on board of a UN private aircraft has been canceled due to the refusal by [president Saleh’s] General People’s Congress party and Ansar Allah to sign the document stating that the United Nations does not bear responsibility [for the flight's safety]," the source said. 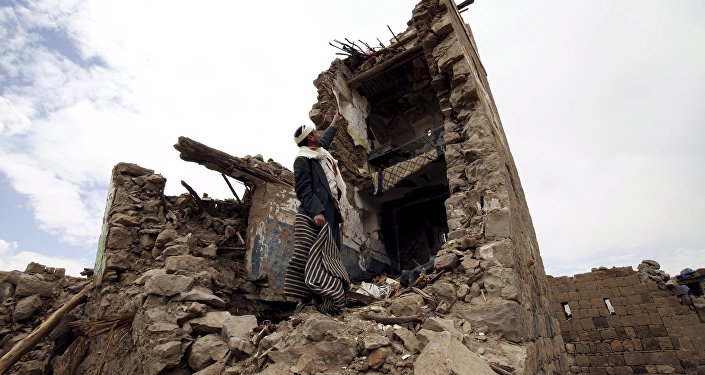 © REUTERS / Mohamed al-Sayaghi
‘UN Prefers Not to See’: Saudi-Led Coalition Bombing Yemen Back Into the Stone Age
According to the source, the United Nations offered the delegation to sign the document, according to which the organization does not take responsibility for the security of passengers as the plane will fly over the territory of an armed conflict.

Yemen has been engulfed in a military conflict between the government headed by Abd Rabbuh Mansur Hadi and Houthi rebels, the country’s main opposition force since 2014.

The UN-brokered talks to end the Yemeni conflict started in Kuwait in April and ended in early August, with the government and Houthi rebels failing to come to an agreement.