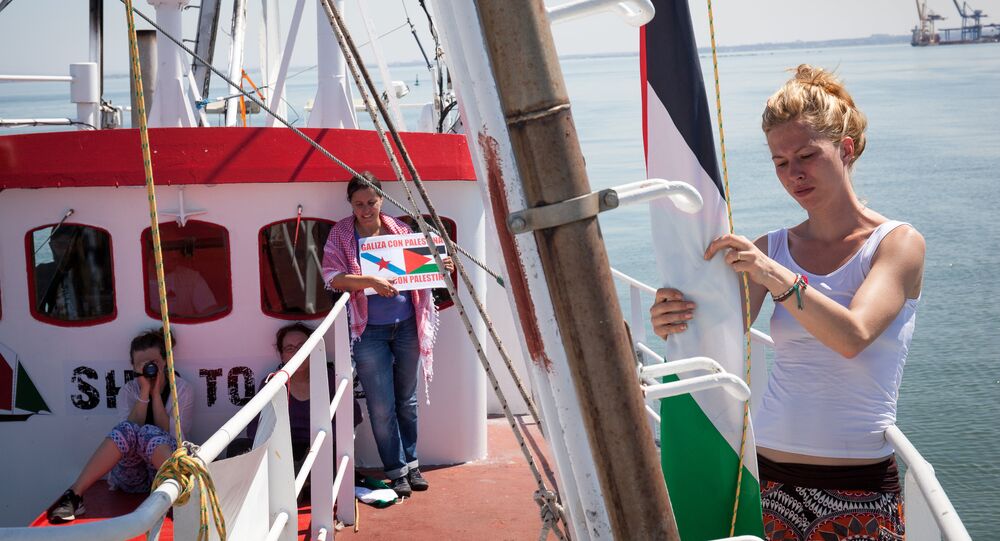 A group of activists are sailing from Barcelona to the Gaza Strip in an effort to draw attention to the role of women in the survival of Palestinian people, blockaded in Gaza.

© Sputnik / Vladimir Astapkovich
'A Mistake': Italian Parliament Reproaches Israel for Barring Entry to Gaza Strip
On September 14 two sailing boats set sail from the port of Barcelona on the Women's Boat to Gaza, in order to raise awareness of the plight of Palestinians living under blockade of the Gaza Strip.

The two boats are called "Amal" (Hope in Arabic) and "Zaytuna" (Olive), and are crewed by women from 15 different countries. One of the crew, Jaldia Abubakra, told Sputnik Mundo that the activists want to draw attention to the blockade of the Gaza Strip.

"I hope that we will wake up the conscience of humanity, and draw attention to this criminal blockade of Gaza, which has lasted for nearly ten years," said Abubakra, who was born in the city of Beersheba in southern Israel and now lives in Madrid.

Zohar Chamberlain, coordinator of the Women's Boat to Gaza committee, told Sputnik that the crew intends to travel all the way to Gaza, in spite of the blockade.

"We believe that there are no just impediments to our visit to Gaza, so there is no reason for us to end our journey in countries that we don't want to go to (Israel and Egypt)," Chamberlain said.

© Photo : Rumbo a Gaza
Palestinian women in Gaza
The launch was organized by the Freedom Flotilla Coalition, a campaign group which has organized several peaceful protests against the blockade of the Palestinian territory. Its aim is to "highlight the vital role women play not only in the resistance movement, but in the survival of the Palestinian people as a whole."

The Gaza Strip, with a total area of 365 square kilometers, has a total population of more than 1.76 million people, including 1.24 million Palestinian refugees.

Since the early 1990s, Israel has imposed movement restrictions on the Gaza Strip, and intensified them after the Hamas movement took control of the territory in 2007.

Hamas, an Islamist political and militant group, seeks the creation of an independent state of Palestine and wants Israel to withdraw from the Palestinian territories. Hamas also governs the Gaza Strip independently of the Palestinian Authority.

© AP Photo / Mahmoud Illean
Flipping the Script: Most Unexpected Alliance Against Daesh Enters the Game
Israeli troops left Gaza in 2005, but Israel maintains the land and naval blockade of Gaza is necessary for security reasons, to prevent Hamas from getting military supplies to attack Israel.

Palestinians in Gaza are trapped inside the territory by a system of physical barriers, checkpoints and bureaucratic restraints which constrains the flow of people and goods between the Gaza Strip and the outside world.

Egypt also restricts movement at its Rafah border crossing with Gaza, following a series of terrorist attacks in the Sinai Peninsula in October 2014 that killed dozens of Egyptian security personnel. Egypt accused Palestinians of involvement in the terror attacks, and the Rafah check point currently only opens for a few days every few months.

The Power of Yoga in Conflict-Ridden Gaza