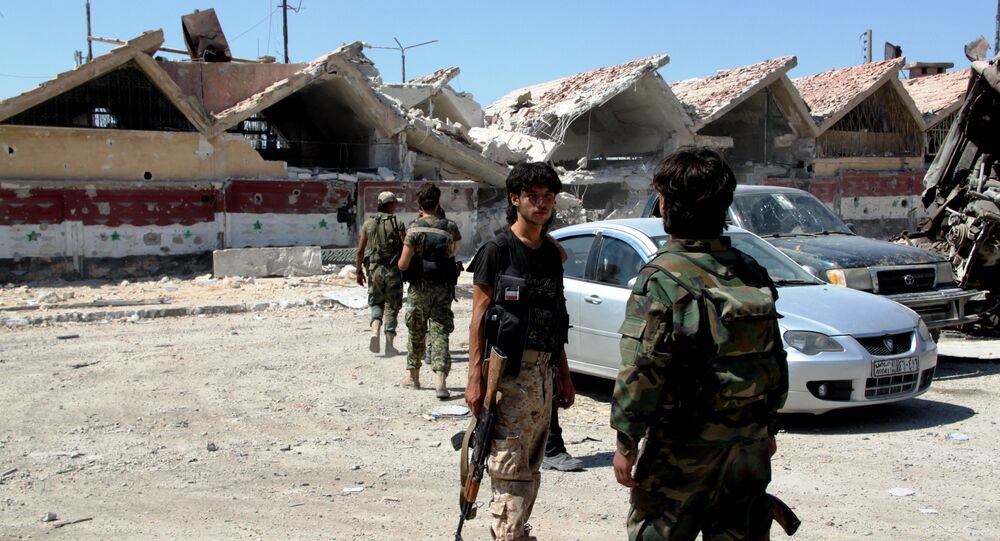 New Syrian Ceasefire Pivotal Moment or Another Hiatus in Death and Destruction?

Amid the first 48 hours of the announced ceasefire in Syria, experts wonder if this agreement will eventually become a pivotal moment in the Syrian civil war or will it be just another brief hiatus in the death and destruction.

© Sputnik / Eduard Pesov
This is What Prompted US to Come to Agreement With Russia on Syria
On Friday, Russia and the United States announced a new plan aimed at reducing the violence in Syria, which included a new nationwide ceasefire which came into force at 16:00 GMT (19:00 Syrian time) on Monday, September 12, the so-called D-Day.

The package of agreements also included the creation of a demilitarized zone around Syria's Aleppo to deliver humanitarian aid to the city.

The truce should initially hold for 48 hours, before an extension for five more days can be implemented. After that, the Joint Executive Centre will kick into operation, and the Russian and US military will coordinate attacks on Jabhat Fatah Al-Sham, formerly known as al-Nusra Front, and Daesh terrorist groups in the approved areas, where operations involving Syrian aircraft will be suspended.

"In this way, the terrorists will be divided off from armed opposition groups participating in the cessation of hostilities," according to a statement by the Russian Foreign Ministry.

"However, there remains serious concern with the reaction of some of the armed Syrian opposition groups, the largest of which, Ahrar al-Sham, said it refuses to follow the Russian-US agreements or to break with their comrades in arms from Jabhat Fateh al-Sham," the statement further says.

© AP Photo / Bassem Mroue
Hezbollah Fighters Support Syrian Ceasefire Deal – Reports
Meanwhile Irina Zvyagelskaya, a senior research fellow at the Institute of Oriental Studies of the Russian Academy of Sciences says the process of separation of the so-called "moderate opposition" from the terrorists will inevitable face a number of obstacles.

"The situation on the ground in Syria is very complicated," she told Russian online newspaper Gazeta.ru.

"There are examples when people who are not terrorists by conviction chose to join the terrorist groups. Those are the people who are seeking protection and it is easier to find it by joining large organizations," she explained.

However, the political analyst added, there is an understanding that those who accept the ceasefire will be excluded from the list of groups which are subjected to airstrikes.

Russia's Duma (lower chamber of the Russian parliament) Deputy Speaker Sergei Zheleznyak is convinced that "any agreements are better than absence of any agreements", adding that currently it is the Americans who are "holding the ball."

Nikolai Kozhanov, a nonresident scholar in the Foreign and Security Policy Program at the Carnegie Moscow Center, says that the new agreement has more grounds to become a long-lasting ceasefire due to a number of important changes in the situation in Syria.

"First, Turkey has entered the war," he told Gazeta.ru.

© AP Photo / Hassan Ammar
Key Reason Why Russia-US 'Patchwork' Deal on Syria Risks Being Ruined
"Second, the parties reached a joint understanding that besides the peace talks there is no alternative [to settling the crisis]."

However, he added, the details of the agreement have not been disclosed yet which, in turn, raises the question of whether either side to the agreement has any mechanism of control over the ceasefire, or  any real desire to stop the war in the country.

Following the Friday agreement, Russia's Foreign Minister Sergei Lavrov said that he and his counterpart John Kerry could not make public the package of documents they had agreed upon, as they "contain sensitive and serious information."

The two diplomats "did not want this information in the hands of those who would try to disrupt the implementation of humanitarian access measures and other parts of their agreements."

Irina Zvyagelskaya also thinks that there are chances that this ceasefire will last longer, but due to different reasons.

© Sputnik / Mikhail Alaeddin
US May Use Ceasefire in Syria to 'Help Allied Groups' Entrapped in Aleppo
"The new ceasefire differs from the one reached in February through its agreement to separate the opposition forces from the terrorist groups," she told the newspaper.

"For a long time the US seemed to be agreeing, but in fact was doing nothing and only provoking criticism of our side," she explained.

"Now we were able to get their real consent. The set-up of the Joint Executive Centre which will oversee the separation process, maintain the communication between the sides and settle the arising disputes comes as real proof of it," she finally stated.