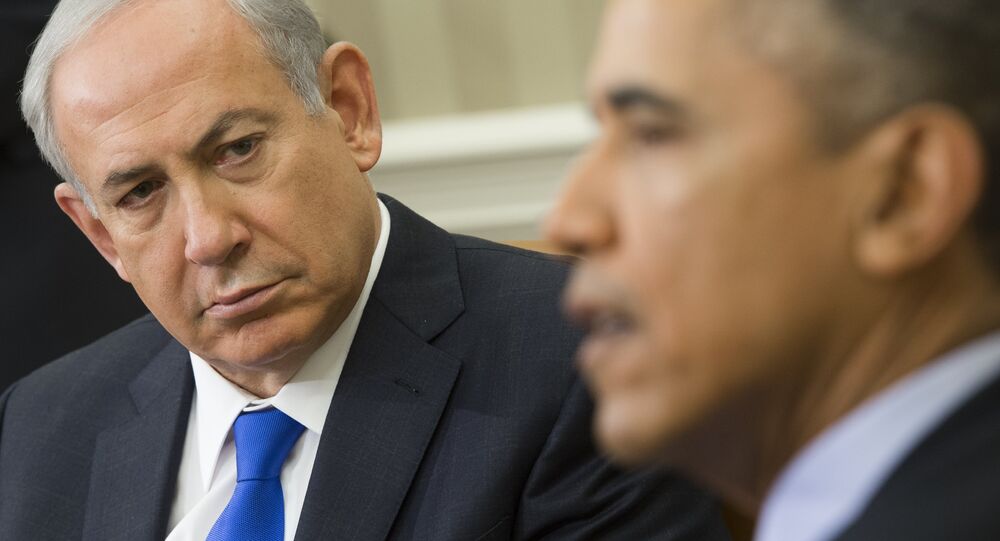 The Israeli Prime Minister likened Palestinian opposition to Israeli settlements in the West Bank to a campaign of methodical "ethnic cleansing" sparking outrage by the international community.

In a video released on Friday, Israeli Prime Minister Benjamin Netanyahu rejected claims under international law that Israel’s program of mass settlements in the West Bank was 'an obstacle to peace" and said that Palestinian opposition to Israel’s expansionist regime was tantamount to "ethnic cleansing."

Netanyahu, striking a tone similar to controversial statements made weeks ago that his regime has done more to help the Palestinians than their own leaders cited the accommodation of "nearly two million Arabs" inside the Jewish state which he said was evidence of Israel’s good faith "openness and readiness for peace."

"Yet, the Palestinian leadership actually demands a Palestinian state with one pre-condition: No Jews," said Netanyahu. "There’s a phrase for that: it’s called ethnic cleansing."

The statements by the Israeli Prime Minister fall on deaf ears due to the imbalance of power in negotiations between Israel and the Palestinian people in favor of Tel Aviv making claims that the Arabs are engaged in a campaign of ethnic cleansing hard to digest in light of the predicate of domination.

In fact, many international analysts have likened Israel’s settlement program, including former US President Jimmy Carter, to South Africa’s regime of apartheid with some hardline leaders in Netanyahu’s administration all but calling for the elimination of the Palestinian people and vociferously opposing the formation of an independent Arab state in occupied territories.

The US State Department issued a harsh rebuke of their ally’s statements calling the video "unhelpful" and "inappropriate."

“We obviously strongly disagree with the characterization that those who oppose settlement activity of view it as an obstacle to peace are somehow calling for ethnic cleansing of Jews from the West Bank,” spokeswoman Elizabeth Trudeau said on Friday. “We believe that using that type of terminology is inappropriate and unhelpful.”

Ayman Odeh, leader of the Joint List group of Arab parties in the Knesset blasted the Israeli Prime Minister saying that "Netanyahu doesn’t care that it is the settlements that were established precisely in order to cruelly expel Palestinian populaces from the West Bank to limited territories around the major city."

Russian President Vladimir Putin continues to try to establish a meeting between Netanyahu and Palestinian leader Mahmoud Abbas in order to negotiate out issues regarding  settlements, security and territorial conditions in order to bring about a lasting peace.