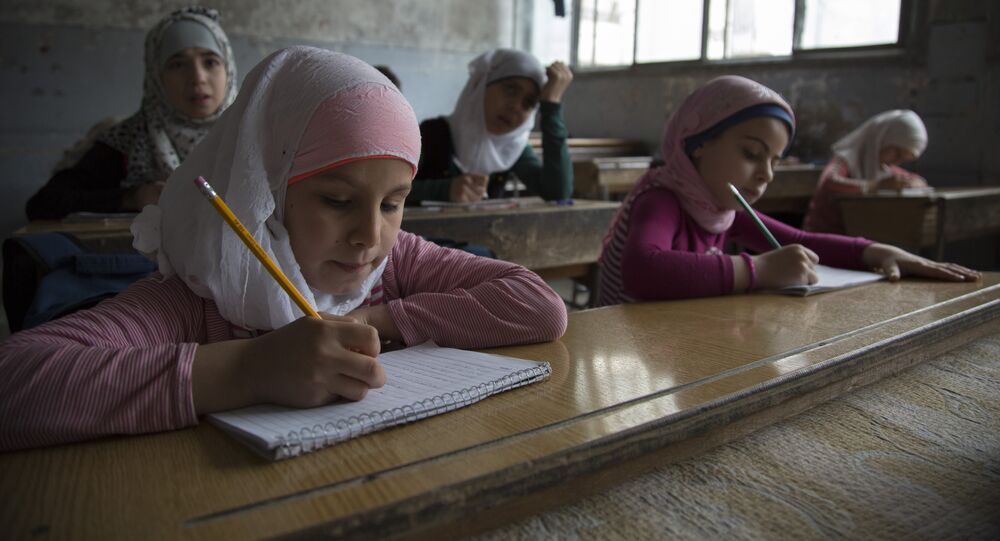 Although Syria's education system was hardest hit by the five-year war, considerable efforts are being made to revive the sector, the country's Education Minister Khazwan Al-Waz told Sputnik.

© Sputnik / Michael Alaeddin
Situation on the Ground in Syria 'Has Begun to Resemble a Global War'
In an exclusive interview with Sputnik, Syrian Education Minister Khazwan Al-Waz said that the country's education sector was hardest hit by the five-year war but that his ministry is doing its best to revive the sector.

Al-Waz confirmed that the number of schools in Syria decreased significantly due to the rise of jihadist militans in the country. There were a total of 22,664 schools in Syria in 2012, while in 2016 the figure stands at just 15,301, according to him.

On top of that, 7,363 schools were damaged by terrorist acts; 331 schools were completely destroyed, he said, adding that the number of students had fallen by 27 percent between 2012 and 2016.

"The five years of war aggravated the situation with education in Syria. The children suffered the great psychological trauma, which affected their perception [of knowledge] and which in turn resulted in a decreased level of performance, "Al-Waz said.

He added that providing for the continuation of teaching in the nation's schools remains the Education Ministry's highest-priority task.

© REUTERS / Bassam Khabieh
Girls ring a bell inside a school yard in the town of Douma, eastern Ghouta in Damascus, Syria May 24, 2016

For that to happen, it is necessary to ensure an education for pupils and students based in Syria's stable areas and elsewhere, according to Al-Waz.
Another priority is to compensate for lapses in learning among students who left their homes, he said.

© REUTERS / Khalil Ashawi
Students receive certificates and gifts at the end of the school year, inside 'Syria, The Hope' school on the outskirts of the rebel-controlled area of Maaret al-Numan town, in Idlib province, Syria June 1, 2016

Al-Waz added that the focus should be placed on simplifying procedures for the admission of pupils and students in educational institutions, as well as introducing new systems to test students' knowledge background.

Other priorities include efforts to introduce a self-study program for students living in hot spots, provide "absolutely all" students with textbooks and cooperate with relevant international and non-governmental organizations to help mitigate the effects of the emotionally traumatic war, he said, citing the launch of the Khaqqi at-Ataalum campaign (My right to study).

Also top on the agenda is a plan to help children from all provinces return to school at the beginning of the school year, distribute a million school backpacks with the stationery required for each child and popularize the role of social workers and psychologists in supporting students traumatized by the war, according to Al-Waz.

© REUTERS / Khalil Ashawi
Damage is seen inside 'Syria, The Hope' school on the outskirts of the rebel-controlled area of Maaret al-Numan town, in Idlib province, Syria June 1, 2016

He said that in some Syrian schools students are already learning Russian along with German and English.

© AP Photo / Muhammed Muheisen
A book is left on the ground at the yard of a school in Tel Rifaat, on the outskirts of Aleppo, Syria. File photo

The Syrian Education Ministry, in collaboration with the Russian embassy in Damascus, introduced Russian language classes to the school curriculum, given that Russian remains one of the six UN languages and is one of the most common languages in the world.

© Sputnik / Michael Alaeddin
'The Country We Used to Know is no More': Possible Scenarios for Post-War Syria
"We enlisted those Syrian citizens who have degrees in Russian and literature and who received their diplomas in one of the republics of the former Soviet Union or the present-day Russian Federation. Our Russian language teachers also include Russian citizens living in Syria," Al-Waz said.

Right now, there are a total of 60 Russian language teachers in Syria, a process that is coordinated with Moscow and Damascus and comes within the framework of bilateral cooperation between the two countries in the education field. The Syrian Education Ministry for its part arranges competitions for the best students, who then travel to Russia for training.